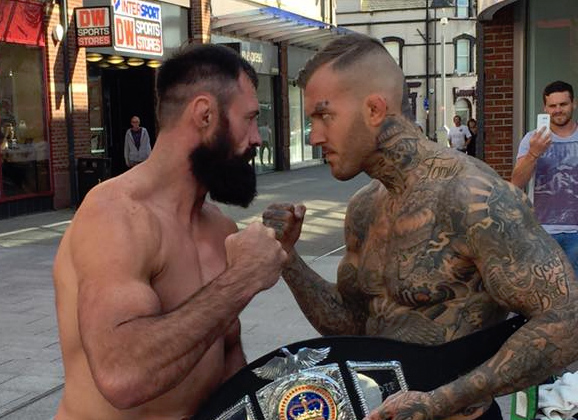 Undefeated Norwegian Kenneth Bergh (4-0) took out local fan favorite Brett McDermott (6-4) tonight at Clash of the Titans (COTT) 16 in Workington, Cumbria, England for the vacant COTT European light heavyweight title.  After landing kicks and a punch, McDermott and Bergh clinched.  It was the Frontline Academy fighter that took advantage of the position and locked up the guillotine submission that he had to fight for as Brett defended well several times. Kenneth has used it to finish his last three bouts.

The Norwegian rebounds from his TUF 23 fight to get into the house and his cancelled bout from two weeks ago at Golden Ticket Fight Promotion.  “I’m super excited I got this chance to fight so close to the cancellation last weekend.  I can’t wait to get back to the cage for a big challenge.” says Bergh to MMAViking.com before the bout.

As you can see, in the video below, it was an outdoor venue. With the two clashing in the evening light.

The Spartan out of Flex MMA was coming off of a first round KO of Jamie Sloane at BAMMA 25, and was a tough test for Bergh.

Since TUF bouts don’t count toward your official record, Bergh remains undefeated in his pro career with 4 wins and 0 losses. The Frontline MMA Academy fighter has finished all his fights in the first round.