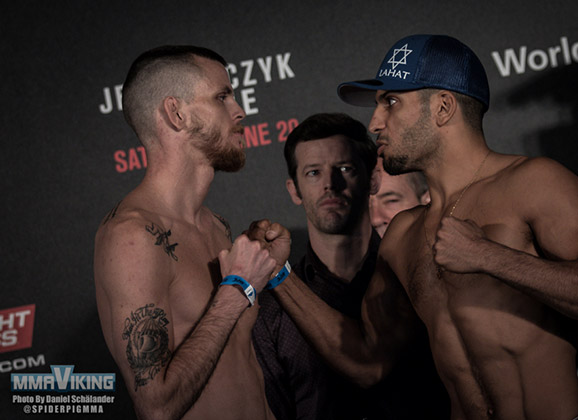 MMAViking.com is cageside in Berlin to report on Swede Niklas Backstrom versus Israel’s Noad Lahat at UFC Berlin today. It is the Allstars Training Center fighters third Octagon bout. See live play-by-play below, and come back for pictures and post-fight interviews.

Round 1
The first round kick-offs and both fighters move around feeling each other out, Lahat gets a good double leg takedown and lands in the full guard of Bäckström. Now a gogoplata from Niklas and it is tight. The Israeli fighter is in trouble and flops to his back. They roll around a bit and its Niklas who gets the upper position taking Noad’s back with a body triangle, working on a rear-naked choke, but the black belt defends it well. Bäckström stays on his back but as Lahat defends Bäckström goes for an armbar attempt but time runs out.

Round 2
Lahat comes out more aggressively in the beginning of the second round and lands a few good strikes, including a good right hand. Bäckström is getting tired and is taking more strikes as the round goes on. After a takedown defense Lahat lands in full mount and goes for an armbar but Bäckström fights through it and gets out. Lahat gets into a side position and works with punches and elbows with good damage, time runs out.

Round 3
Last round is on and they both throw some punches but nothing really connects, Nilklas gets a takedown against the cage,Lahat gets into a mount but Bäckström escapes it and tries to go for lahats back. The swede punches Lahat up against the cage and they land on the ground and scramble for positions. Niklas gets a side position and takes the back but time runs out and its up for the judges.

“It was a really tough fight, he is really skilled. He definitely got the first round, but second round I got no doubt. He got more position in the third, but I got more damage.” – Lahat