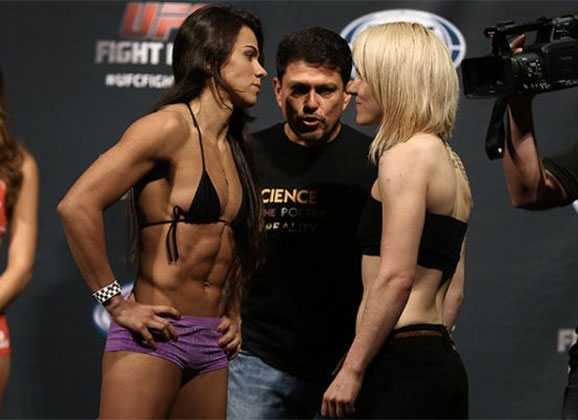 Finn Tina Lähdemäki will face Brazilian Cláudia Gadelha the first ever UFC women’s strawweight fight in the Octagon. The bout will be the first of the evening of UFC Fight Night 45, which will go down at the Atlantic City’s Revel Casino Hotel. The card will be headlined by lightweights Donald Cerrone and Jim Miller.

Lähdemäki and Gadelha emerge into the arena for the historic first Women’s Straw Weight bout in the Ultimate Fighting Championship. Lähdemäki representing the Blue and White, looks focused. Liam Carrigan starts the battle and the two combatants touch gloves in the center. Gadelha opens up early with a three punch combination, but Lähdemäki throws a solid leg kick. Gadelha is finding her mark with the left hook, but Lähdemäki is game and staying in the center, exchanging hands. Solid knees from Gadelha, and she tosses Lähdemäki to the mat.  Lähdemäki puts her back to the cage, and stands but she is tossed once more to the mat by Gadelha who enters her guard and begins to pound Lähdemäki’s body. Lähdemäki’s corner calls for her to “keep digging” from the bottom. Gadelha is now standing and peppering the legs with solid shots. Gadelha passes into half-guard, giving Gadelhain trouble with the pass to side control is Lähdemäki, but Gadelha has her off the cage, and in mount with one and a half minutes left in the round. Lähdemäki gives up the back, and is pounded on with a black belt working for an agonizing rear naked choke. Lähdemäki continues to throw punches all spirit and Sisu with 30 seconds left. She shows the thumbs up to the ref and throws more shots over her shoulder, letting Gadelha know she will not be broken in the opening stanza as the horn sounds.

Lähdemäki enters the center of the cage and eats a solid left, but gives back as good as she gets with a solid left-right. Overhand left lands on the gloves for Lähdemäki. Short right hook lands for Lähdemäki but she’s clinched, then pressed tight to the cage by Gadelha who decides she wants Lähdemäki on the mat, then takes her there with conviction. Lähdemäki moves towards the fence, doing her best to lock up Gadelha and work her way to the fence as per the instructions of her corner. Gadelha passes to control the back of Lähdemäki against the cage with one hook in but Lähdemäki stands and puts her left side to the cage. Gadeha doesn’t do enough and the ref restarts them in the center. Gadelha falls short with a right hand, then comes through with a left-right. Lähdemäki goes to the body with a solid right hand before getting caught with a spinning back fist. Gadelha once more clinches and throws several knees up the middle, but Lähdemäki gives her a right hand on the exit. Lähdemäki is now controlling the center, but this changes every few seconds, solid shots to the head and body by Lähdemäki. A solid blitz ends this round for Lähdemäki, but she eats a hard left on the buzzer. Lähdemäki’s corner acknowledges that Gadelha is tiring, and tells her to press forward.

A final touch of gloves starts the last stanza, and Lähdemäki moves to the outside of 2 consecutive hands from Gadelha. Gadelha shoots in to grab clinch and, more than likely a takedown attampt, but Lähdemäki isn’t having it. Lähdemäki takes the center and begins to tie her hands together with kick attempts. A short right and following left lands for Lähdemäki, who appears fresher in the final round. A right uppercut and a knee up the center land for Lähdemäki and her corner calls for her to take the center. “Don’t let her rest!” is the cry from the corner of Lähdemäki and she obliges, pushing forwards with single punctuating shots, but Gadelha lands an inside trip in the center, and drops one hell of a hammer in the form of her elbow. The anvil becomes the skull of Lähdemäki with her face in between the two. The corner of Lähdemäki fervently screams for her to regain her feet, to no avail. Lähdemäki stands and appears to understand she is behind on the card, she opens up with leather, shin, and Finnish fury, but Gadelha likes her best on her back and goes to work with hungry hands. Lähdemäki ends the round on her back.