Swedish featherweight Niklas Backstrom (11-2) returned to action this evening at ACB 65 from the Sheffield Arena as he faced Andrew Fisher (15-8-1). 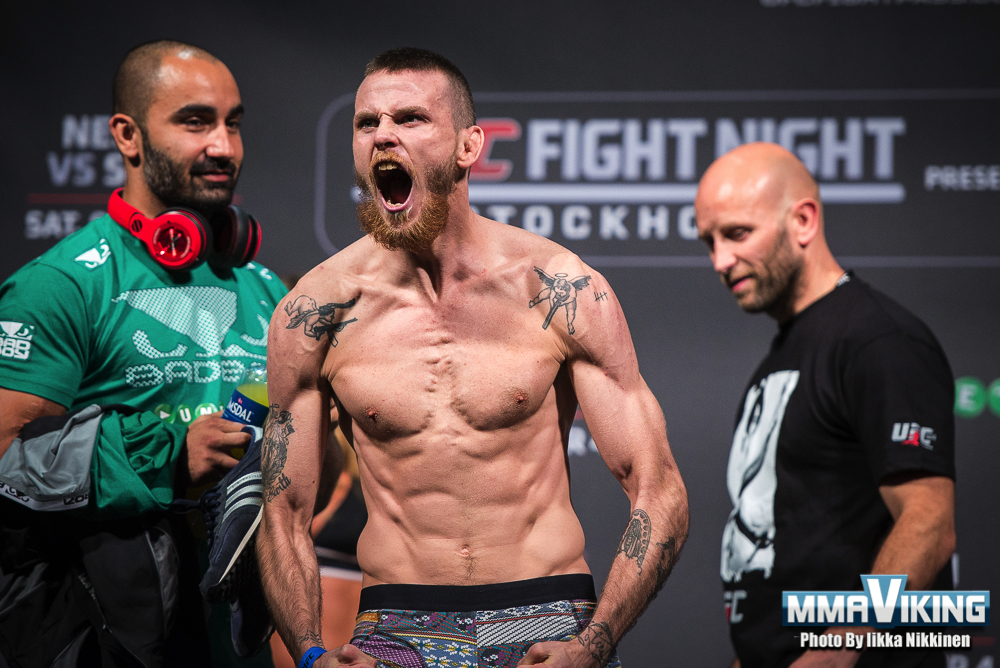 Backstrom had been victorious in all three bouts since leaving the UFC, but faces a tough opponent in Andrew Fisher, who replaced Thiago Tavares on relatively short notice.

Fisher has previously competed under the Bellator, Cage Warriors and BAMMA promotions and looks to build momentum after defeating Diego Vargas by submission in Brazil.

Both fighters are tentative in the opening exchanges, trading leg kicks. The Swede lands a takedown in the second minute of the fight and takes the Englishman’s back. Fisher tries to use the cage to get to his feet but Backstrom is pressuring his back.

Andrew Fisher gets to his feet, before Backstrom gets the trip but he’s straight back up. Fisher lands a huge strike and knocks the Swede down. Backstrom recovers but Fisher is looking for a finish and is in side control.

The bell rings and Backstrom will be looking to recover from that knockdown.

Fisher opens the round landing a big right hand, before Backstrom again seeks the takedown. A left-right combo from Backstrom lands and his confidence appears to be growing. Another big right hand follows before Fisher lands a right hand of his own. The Swede again looks for the takedown but Fisher stops it.

Another right hand followed by a spinning kick to the midsection from the Englishman. Another spinning kick catches Backstrom again, and he’s suffering with a cut above his right eye.

The bell rings and it appears that Fisher could be two rounds up.

Another tentative start to the round with Backstrom looking to land the left hand. Fisher lands an uppercut before the Swede shoots for a takedown, which is stopped again. The Englishman is continually pressing Backstrom onto his back foot and towards the fence.

Backstrom lands a right hand after another spinning kick misses by Fisher. The Swede looks for the takedown again, but is yet again denied by Fisher. A knee to the midsection from Backstrom follows before both men exchange strikes and Niklas presses him against the cage.

Fisher lands the takedown with seconds on the clock and the bell rings.