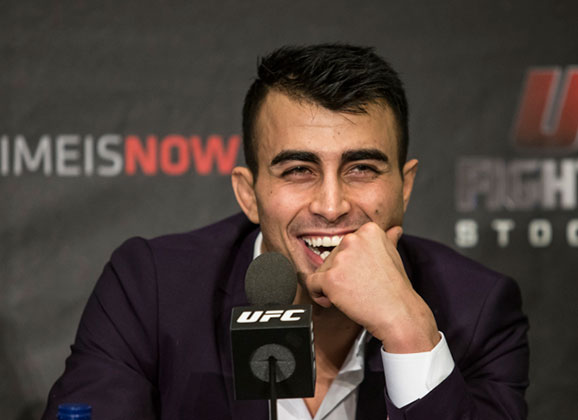 Makwan Amirkhani had one of the fastest UFC bouts of all time. 8 seconds was the time that was given after the bout at Tele2 Arena, stopping Andy Ogle making it the 5th fastest in the Octagon. “It’s not eight seconds, it’s six” says Mr. Finland that corrected Ariel Helwani on yesterday’s The MMA Hour about what he thinks should be the quickest finish in the Octagon.

Many images, like the above have been passed around various sites and forums

MMAViking.com talked to the official time keeper from the Swedish MMA Federation (SMMAF) Andreas Bodin, who was cageside at Fight Night Stockholm.

“The time in the TV-production and on the screens in the Arena shows a different of one second from reality. If you use your own stop-watch from the moment the judge says fight until he breaks it up you will notice its 7.4 – 7.5 not 6 sec that the time/watch on the screens says. So the official time is correct and will not be changed.”

So, Duane Ludwig barrage on Jonathan Goulet at UFC Fight Night 3 that stands at 6 seconds will remain the fastest. Interesting enough, Bang’s bout was declared 11 seconds originally, until Dana White timed it and declared it 6. However, if Dana White or anyone else times the Amirkhani and Ogle bout, you won’t get 6 seconds, but something closer to 7.4 seconds. Try it for yourself if you have any doubt.