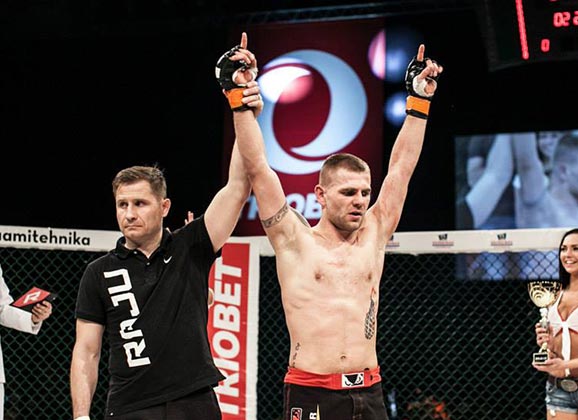 Estonian Henri Hiiemäe came through in the main event in front of a local crowd in Tallinn, stopping Saulius Bucius at RAJU 13.  Hiiemäe improves his record to six wins and one loss, winning all of his fights in the RAJU cage. The event held at the Saku Suurhall arena again showed the popularity of the Estonian promotion, and the card also highlighted its lead organizer Ott Tönissaar who rode to the cage in a motorcycle for his fight.

Tõnissaar was also able to win in the co-main event in a bout that went the distance Saturday night where all judges saw him edging Viktor Tomasevic.

Jüri Jõgiste was on the losing end of a fight again, now dropping two straight bouts after starting off his pro career at 2 wins and 0 losses.

See the full results of RAJU 13 below.

Hiiemäe got caught by Bucius’ strong ground game in the first round of the fight and had to defend himself against an armbar and a rear naked choke for most of the round. In the second round of the fight, Hiiemäe delivered a straight leg kick which broke Bucius’ nose, shortly after which Bucius submitted and Hiiemäe emerged victorious.

Jõgiste kept pace with Melnikov in stand-up during the first round and eventually the fight went to the ground. Most of the second round passed on the ground where Melnikov was stronger and attempted several submissions. In the third round of the match, Jõgiste did not have stamina left and eventually submitted to strikes.

Ülenurm dominated Tcikalo with strikes in the first round, which forced Tcikalo to take the match to the ground. Here Ülenurm secured a full mount which eventually lead a transition into a triangle choke and Tcikalo tapping out.