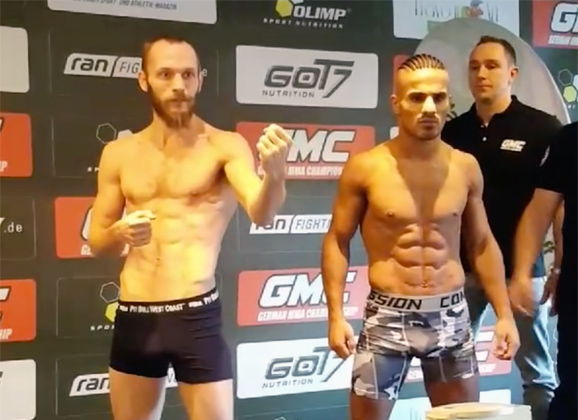 Timo-Juhani Hirvikangas (10-2) will face undefeated Khalid Taha (9-0) out of Germany tonight at GMC 9. MMAViking.com is following the bout live, and will post play-by-play and results below! 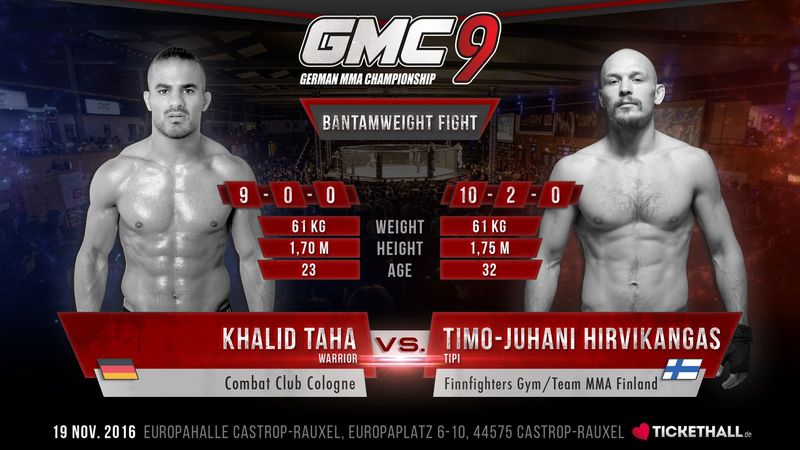 Round 1
First round starts with the touch of gloves and it’s Taha who throws the first combination of the fight. Taha continues with the pressure and lands a nice two punch combination. Tipi pressures Taha up against the cage and secures the clinch and bodylock, Tipi seems to be looking for a takedown. Taha reverses the position, but Tipi counters with a leg pick takedown and secures back mount and is looking for a rear naked choke. Tipi secures the body triangle and throws some punches from the back.

Round 2
Second round starts with both fighters throwing kicks at the same time with Taha securing the middle of the cage and landing some leg kicks. Tipi tries to close the distance, but Taha moves away and lands leg kicks again. Tipi seems conservative with his attacks and is looking for counter punches. Taha pressures Tipi against the cage and Tipi tries to counter but it is Taha who drops Tipi to the canvas with a punch. Taha then steps away and Tipi stands up and the fighters start a wild exchange with Taha landing more significant shots. Tipi is able to clinch in the middle of the exchange and trip Taha, securing the takedown. Taha is able to stand up against the cage with Tipi still pressuring with his clinch.

Tipi tries with a takedown, but Taha is able to defend against it and the fighters separate. As soon as there’s space to throw, Taha goes back to the leg kicks. Both fighters trying to land combinations, but neither are able to land clearly and the round comes to a close.

Round 3
Last round starts with a hug and Taha goes back to the leg kicks. Tipi tries to close the distance and Taha throws a wild combination. Taha lands a nice left hook and Tipi answers with one of his own and with that Tipi is able to clinch and force Taha against the cage. Tipi looks for a takedown, but Taha is able to counter and Tipi is forced to the ground on his back and Taha immediately attacks with leg kicks.

Taha moves away and asks Tipi to stand up, Taha lands a nice two punch combination that drops Tipi to the ground and once again Taha moves away and asks Tipi to stand up. Tipi is clearly having problems with his legs and Taha keeps pressuring. Tipi tries to land punches, but Taha’s defense is solid. Both fighters are throwing good combinations. Taha throws a headkick, but Tipi is able to defend against it. Tipi attacks with a combination if his own, but Taha is able to block them again. Once again Taha is able to land a solid punch that forces Tipi to the ground. It’s twenty seconds left in the fight and Taha moves away with his hands raised in the air. Both fighters are throwing wild kicks at the end of the fight and once the bell rings the fighters embrace in respect towards each other.