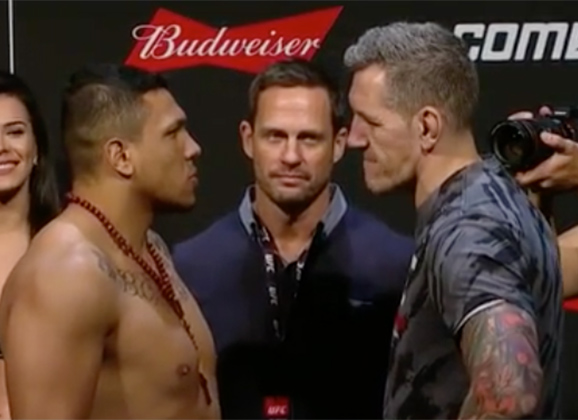 Dane Christian Colombo will battle against Brazilian Luis Henrique de Oliveira in a heavyweight showdown tonight in Brazil. It is the third fight on the prelim card and Godzilla will be in enemy territory. 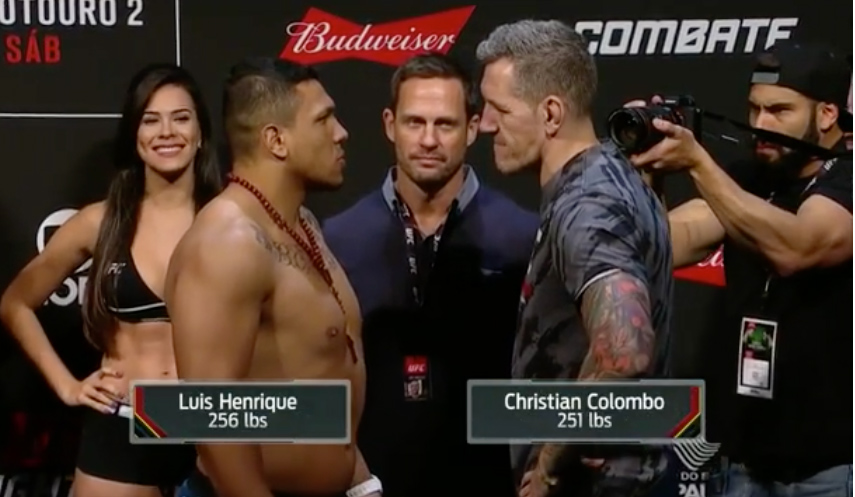 Round 1
Colombo is relaxed to start, throwing out a left jab and keeping distance.  Oliveira lands a right hand and pushes the Dane to the cage, and likes to go into the clinch.  Godzilla is much taller, but has his back against cage here as the Brazilian gets a good body lock.

Two minutes in, and the Oliveira still working the tie-up, but as he let go the shorter fighter lands a nice punch.  Half way through the round, and Colombo does not look comforable on teh feet after that last punch.  Oliveira charges in and gets the take-down, and Colombo almost gives up back but he is in a bad position with his back to the cage and the Brazilian looking to mount and land big punches.  Full mount recovered, but Colombo gets elbowed to the face and he is cut.  One minute left, and he eats another elbow. Colombo does make space and pushes away, but Oliveira picks him up high and slams him to the mat.

Round 2
Colombo finds himself on his back immediately in the second as Oliveira goes for a takedown. But the Dane is working to get up off the mat and he does it. The Brazilian gets a full body lock and looking to take the fight to the ground again. Three minutes left in the round and this Brazilian looks tired…. but not tired enough to get another takedown. An elbow to the center of the forehead and another cut on the Dane. Another short left angle. The blood is flowing and the referee calls time out to look at the cut, but this won’t work in the favor of Colombo that seems to be the fresher of the two fighters. Now the fight is standing! What a mistake… but it does not matter as Colombo is immediately taken down again. Now full mount for the first time, but Colombo gains half guard.

Round 3
Colombo gets hit by a big right hand. Oliveira charges in and gets a double leg take-down again. Four minutes left, and we need something big from Godzilla to turn this fight around. Oliveira still looking to improve position and pushes forward and grabs a guillotine for a tap. That is it.