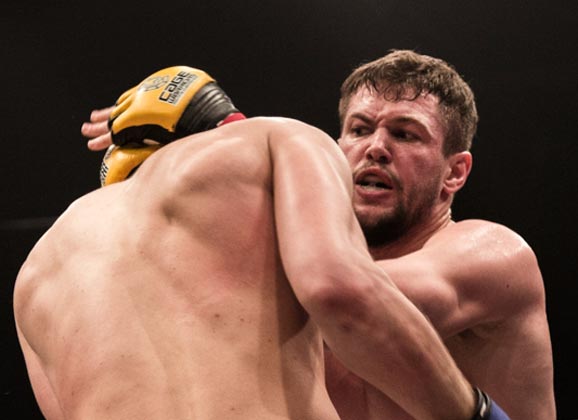 The Nordics couldn’t be better represented this Saturday as fighters from Denmark and Norway, and Sweden and Finland battle for belts keeping Cage Warriors titles in viking hands.

Champion Nicolas Dalby (12-0) from Denmark will take on Norway’s Mohsen Bahari (8-1) in welterweight clash that headlines the card. The “sharpshooter” won the Cage Warriors belt, which had been vacated by Cathal Pendred that moved on to the UFC, in March at CWFC 66 with a swift head-kick KO of Sergei Churilov.

“Bahari is an exciting fighter who leaves it all in the cage, so I think he’ll make for a really tough opponent. He seems like a cool guy but it’s going to be action-packed when we lock horns at the Copper Box on November 15.” says the champ of the challenger from Oslo’s Frontline Academy.

The 30-year-old Bahari had two nice wins this year with a gritty battle with Bruno Carvalho and a solid win over three-time UFC veteran Benny Alloway. “I’m extremely happy that Cage Warriors has given me this opportunity,” Bahari said. “It’s an opportunity I am determined to make the most of. I can’t wait.”

Bahari would love to bring another belt back to the gym to join that of current CWFC middleweight world champion Jack Hermansson.

The vacant CWFC women’s bantamweight world title will be up for grabs at the Copper Box Arena in the Olympic Park as Eeva Siiskonen (3-1) steps in at short notice to replace the injured Niedzwiedz. The Finn will be facing Rumble sports teammate of Nicolas Dalby, in Pannie Kianzad.

“Only a week’s notice but I’m more than ready,” said Siiskonen. “On Saturday I’m going to be the world’s biggest underdog, but I love it. After the bell rings, Pannie Kianzad is going to know what us Finns are made of.”

Kianzad will make bantamweight for the first time, as she drops down from a catch weight of 140lbs in her last bout and has fought at featherweight prior. The charismatic 22 year old with 6 wins and 0 losses will be seeking to beat the last minute replacement. “Eeva Siiskonen stepping up for this title bout shows what level the Scandinavian fighters bring to the table. My eyes are still set on making history by bringing that belt home.”

The card also features the professional debut of Dane Anna Elmose, who also trains out of Rumble Sports. ““I don’t want to fight under amateur rules with big gloves and shin guards. I want them small gloves and see what happens.” says Elmose to MMAViking.com.