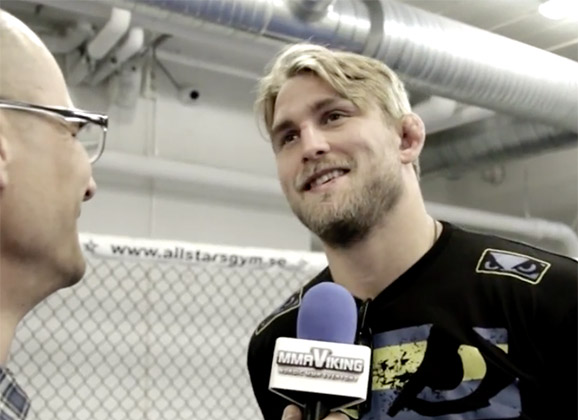 Current UFC Light Heavyweight prospect and #1 ranked Nordic Light Heavyweight Alexander Gustafsson (16-3-0) met with MMAViking founder Ryan O’Leary and opened up about his early career and training, his MMA debut against Saku Heikkola, and his bout with Phil Davis and its impact on his focus as an athlete.

“Back then,” Gustafsson said, referring to his bout with Phil Davis 5 years ago, “I did it for fun. Now, it’s more of my life. It’s something I do every day. I actually live through this sport.”

Of his next opponent, Glover Teixeira (22-4), Gustafsson said:

“Anthony [Johnson] is a little bit more explosive than Glover, Glover hits at least […] harder than Anthony, but he doesn’t have that quickness in his punches.”

Gustafsson admitted that he must be well prepared for this match-up at UFC Berlin on June 20, and additionally stated he would have to be prepared for the wrestling of Teixeira.

While not all the details are worked out, The Mauler will once again work between his home gym of Allstars Training Center and San Diego’s home away from home Alliance.