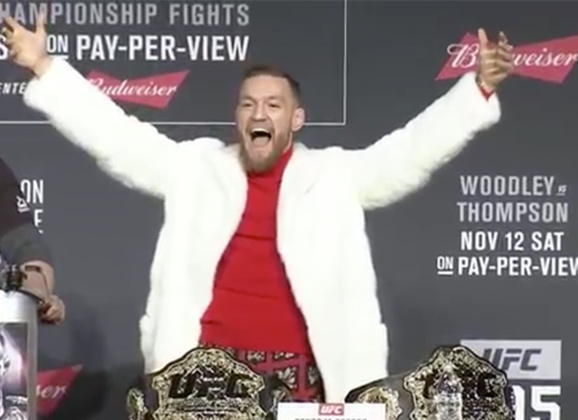 Can Conor McGregor make history and capture his second belt against against Eddie Alvarez going down at UFC 205 at Madison Square Garden Saturday night. We asked Nordic vikings to give us their pick and thoughts on the big fight. Check them out here!

I am built to inflict irreparable damage

Jack Hermansson (Sweden/Norway) McGregor by tko/ko. I think that during the fight Conor’s left hand will touch Alvarez and I dont think he can take it.

Patrik Pietilä (Finland) Both of them are really skilled professionals. I think that Alvarez has advantage if the fight goes to later rounds. He is pretty hard headed guy but as we all know Conor has really hard and precise strikes. But i think and hope that Conor will finish Alvarez by KO and make MMA history by being two weightclass champ!

Ott Tõnissaar (Estonia) Conor wins by KO in the second round, and the McGregor Show keeps going on!

Toni Tauru (Finland) I have to jump in that crazy train called Conor McGregor. If somebody can pull this of it just might be him. Only time i have voted against Conor was Diaz fights and just because those homies rock.

Karl Albrektsson (Sweden) I think Connor will tag Eddie as he moves forward and if he doesn’t go down from the first strike Connor will take a step back and finish what he started.

Mohsen Bahari (Norway) I think mcgregor will take it. His standup is more all round while Alvarez is more boxing oriented and it seems that Alvarez is going to stand with him, but I hope Alvarez will surprise.

Mikko Ahmala (Finland) Mystic Mac makes history again and catches second belt to he’s sholders by knocking out Alvarez in the end of second round.

Aleksi Nurminen (Finland) CONOR ALL THE WAY BABY! Conor has a much higher fight IQ and is more technical fighter than Eddie. Eddie is a beast with a big heart tho, but I am pretty sure Conor takes this one! Normally I would say Conor by TKO but something inside of me says Conor by submission ?

Oliver Enkamp (Sweden) My objective opinion is that McGregor will take this one. Alvarez isn’t really known to fight smart but more of being a slugger. I hope that his team have put together a smart game plan ahead of this fight so he doesn’t get to eager or falls for McGregors mind games. If not so I think that McGregor will hit him in an opening during an exchange and take Alvarez out standing pretty early. The guy says McGregor by TKO but I say may the best man win!

Håkon Foss (Sweden/Norway) Eddie Alvarez is a perfect opponent for Connor. He will have a lot of advantages as the reach, speed and technique. I think that Connor wins by KO/TKO in the first round by a left hook.

Aleksi Toivonen (Finland) Eddie is a super tough guy and theres always a chance he’s gonna grind out a decision win. That said, Alvarez is also very hittable and takes a lot of damage in most of his fights, so a finish or not I think the damage of the early rounds is enough to grant stoppage or a decision win for “The Notorious” one.

Zebastian Kadestam (Sweden) Last time I predicted against Mcgregor and that didn’t work, so this time I’m going to go with Mcgregor and I hope he gets destroyed, can’t stand the guy. He is destroying this sport.

One more sleep. One more sleep before Eddie's head be ripped off. UFC205 Face Off. ___ Countdown: 1 day till UFC205. #TeamMcGregor ?? ____ You can order our "King McGregor" shirt from the link in our description! 20% off this weekend for the UFC205 fight! ____ #ConorMcGregor #Conor #Mcgregor #TheNotorious #Notorious #Boxing #Box #JiuJitsu #MMA #UFC #EddieAlvarez #Alvarez #UFC205 #Joker #Halloween #HappyHalloween

Teemu Packalen (Finland) I pick Alvarez to win. This fight is going to be a long one and tough pressure of Alvarez is eventually going to wear Connor down.

Mikkel Parlo (Denmark) I think Eddie Alvarez will win by decision, i think he has superior cardio and wrestling and good striking too he also has a great chin and i think these things will win him the fight.

Mads Burnell (Denmark) I think my man Alvarez will win, better wrestling, a heart of a lion, good boxing. If Alvarez gets past the first 2 rounds it will be eazzzzy money for him.

Joni Salovaara (Finland) Conor is dangerous in the first and second. Definetly has that ko shot. But after that it’s Eddie. I would predict that if Alvarez is not fighting with emotions he could take Conor out in the 3rd round or with decision.

Glenn Sparv (Finland) Eddie, because he’s stylistically matches up good against Connor and he got tough battle experience. I predict TKO in the later rounds.

Emil Weber Meek (Norway) I hope and think Alvarez will eat Connors left wellfare left hand a few times, then he will put massive preassure and mould down mcgregor, make him punch like a little girl and gnp him till he quits!

Mathias Lodahl (Sweden/Norway) Hard pick, I think its a coin toss. But if i have to chose I would put my money on Alvarez.  I think he is gonna clinch up with mystic Mac and grind it out like he did against Pettis. That is if he can get past the left cross of the Irishman though.  Alvarez via. Unanimous decision.

Joachim Tollefsen (Norway) If Alvarez has a smart game plan he will focus on wrestling and low kicks to shut down the movement of McGregor and stop him in the second round. If Eddie can’t do this, I think Conor will win in round 3 =) 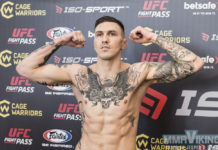