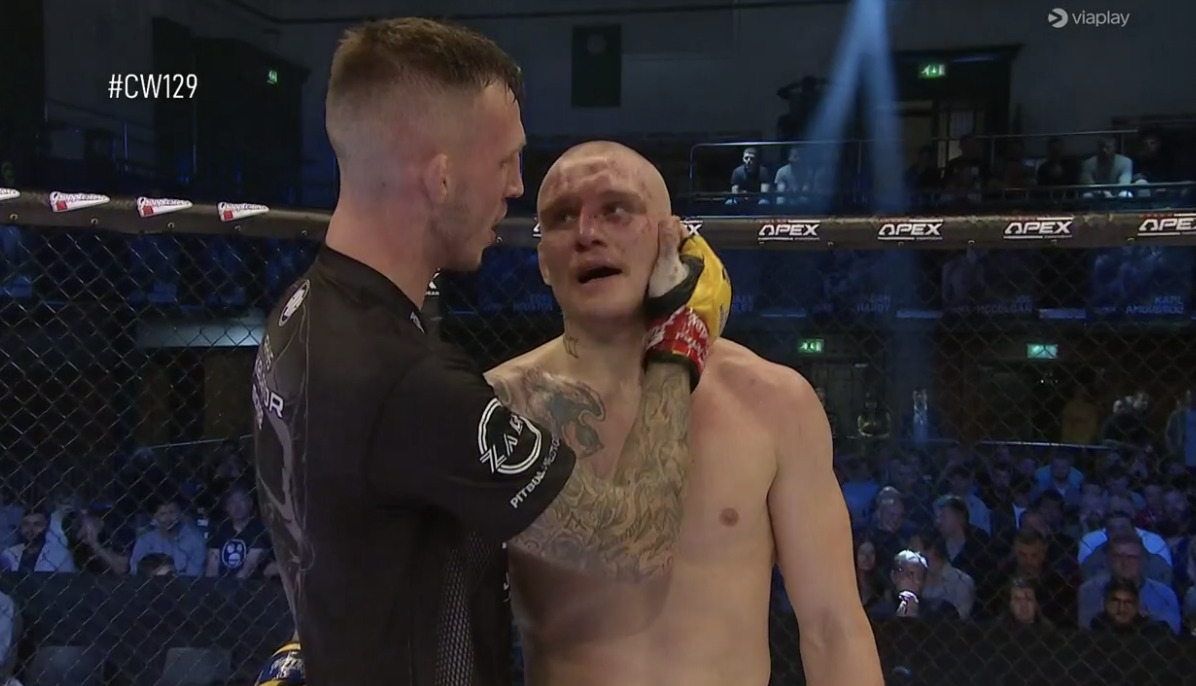 Aleksi Mäntykivi (13-7-0) battled in an absolute war against Rhys McKee (11-4-1) in the co-main event in London at Cage Warriors 129, but the Finn was eventually stopped in the third round. 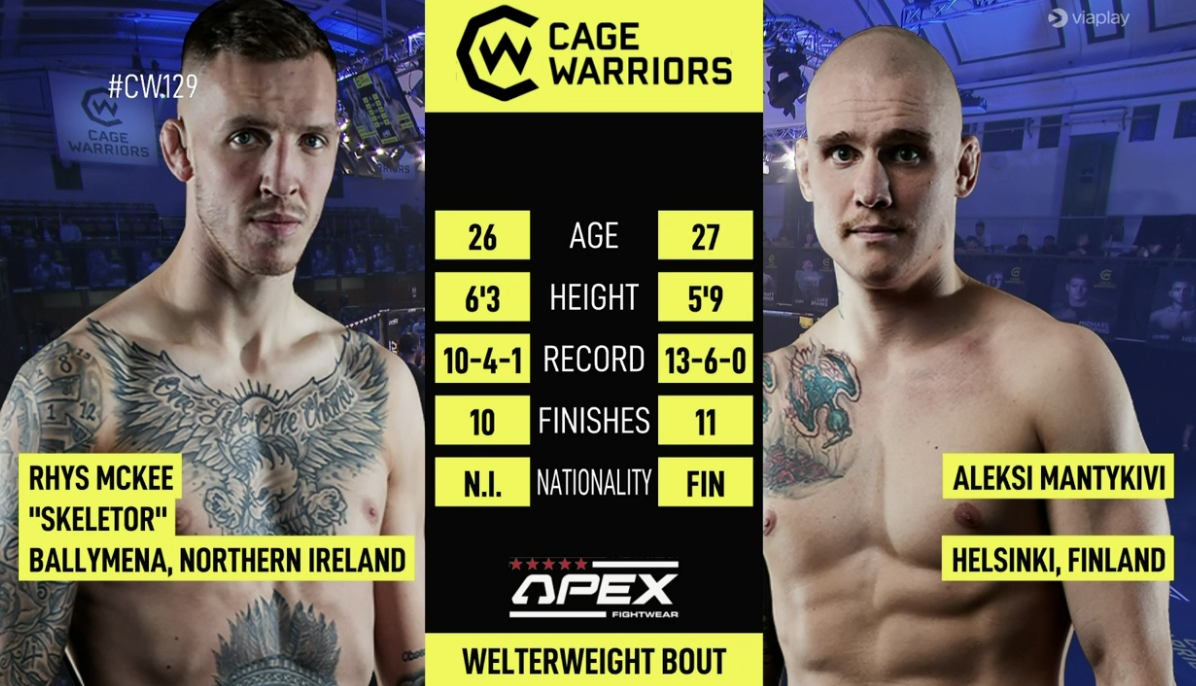 The Loop Martial Arts fighter lands two strong right kicks to start the fight, then the two exchange kicks before Mckee lands a good punch.  These welterweights have power!  Another crushing leg kick from the Finn that is moving forward against the 2X UFC vet.

The reach is with Rhys, but the Finn lands a nice shot in close.  Now Rhys doesn’t want any part of the standup and finishes a take-down before Aleksi battles out and puts the fight back to the feet. 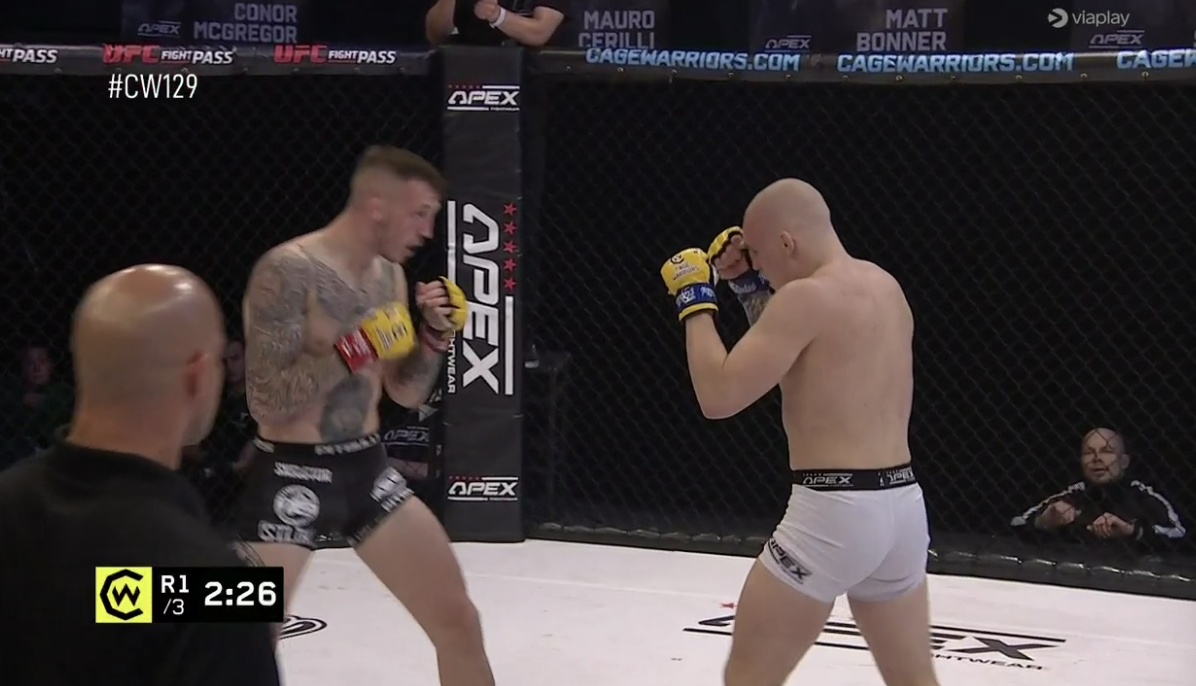 Mckee lands a few shots and ends with a kick to turn the tide.  A nice body shot from Rhys.  Solid right hand from Aleksi!  And a nice combination from the Finn that tries to finish it with a right head-kick, but just puts him out of position.  A real fast-paced fight.  Big shot from Rys lands!  Another crushing right to the face, then to the body and the longer fighter landing solid shots.  Another to the body, but the Finn does not look discouraged.  What a round! 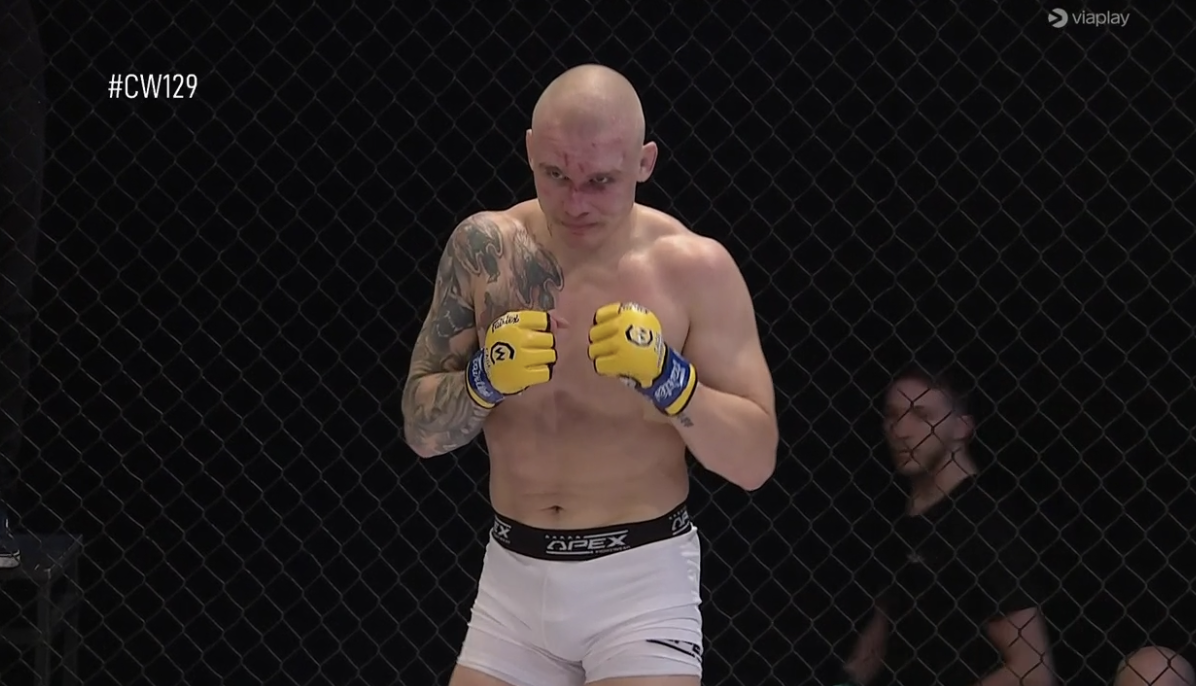 The pace is in favor of Mckee coming out for the second round, and the Finn seems to be tiring.  Oh, one minute in and both fighters land looping punches at the same time!  Aleksi got the best of that one!  A good left hand from the Finn to the head, then a body shot lands from Mckee.  Mckee landing good shots, but then an eye poke stops the fight.  Mäntykivi says he can see and the fight continues.  The two immediately go at it and Mckee starts to land more punches, but a real bad thumb to the eye.  And Mäntykivi needs more time to recover from the fouls. 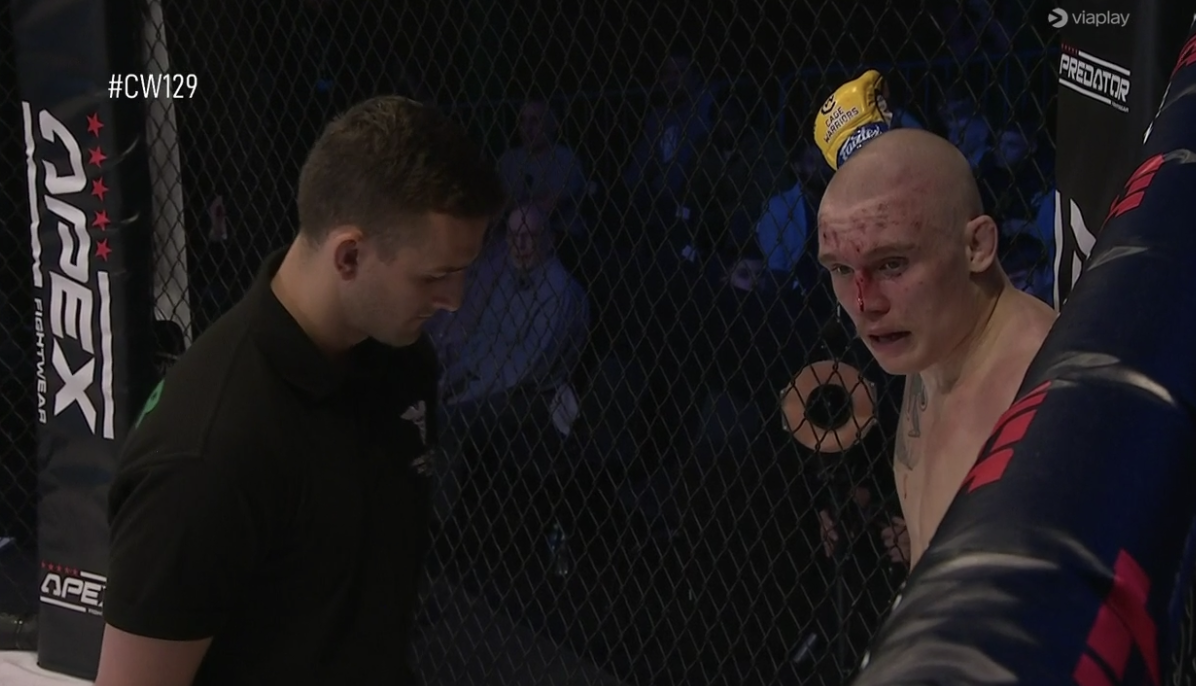 “I can see” says the Finn, as the UFC vet is deducted a point for the eye pokes.  Rhyss going to the body and head, and comes over the top with a crushing right hand.  The Finn has a head of steel, but Mckee ties it up and moves the fight to the ground and looks for a rear naked choke!  It is tight, and oh this should be over…. but NO! Mäntykivi fights it and WILL NOT TAP! 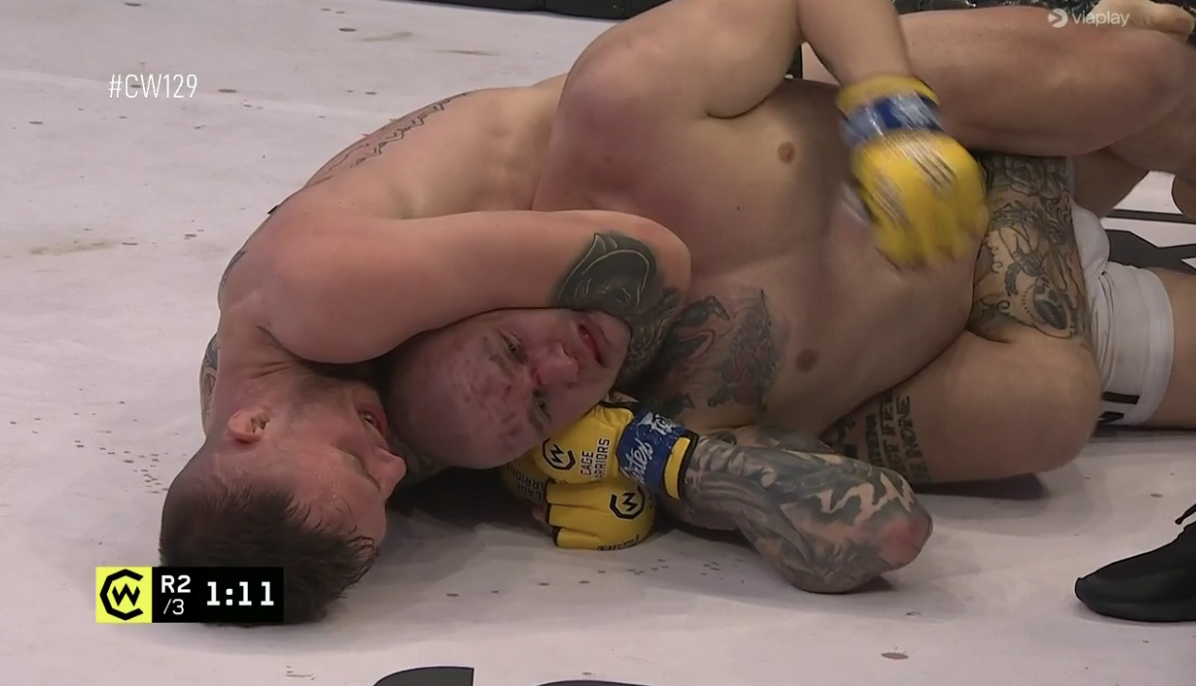 Mckee moves to a triangle off his back and landing elbows, but Aleksi WILL NOT STOP and makes it to the end of the 2nd round.

Unbelievalbe we are seeing a third round with the damage both fighters have taken.  Right kick from Aleksi that we have not seen in a long time.  The length of Rhyss is really hard to deal with for the shorter fighter that is taking shots from distance.  Mckee with a big right hook, and peppers both high and low.  Knee lands on Mäntykivi chin, and just taking damage here.  Aleksi lands a right kick, but then takes a kill shot to the head… but ignores it.  Two minutes left and the Finn’s face is bloodied. 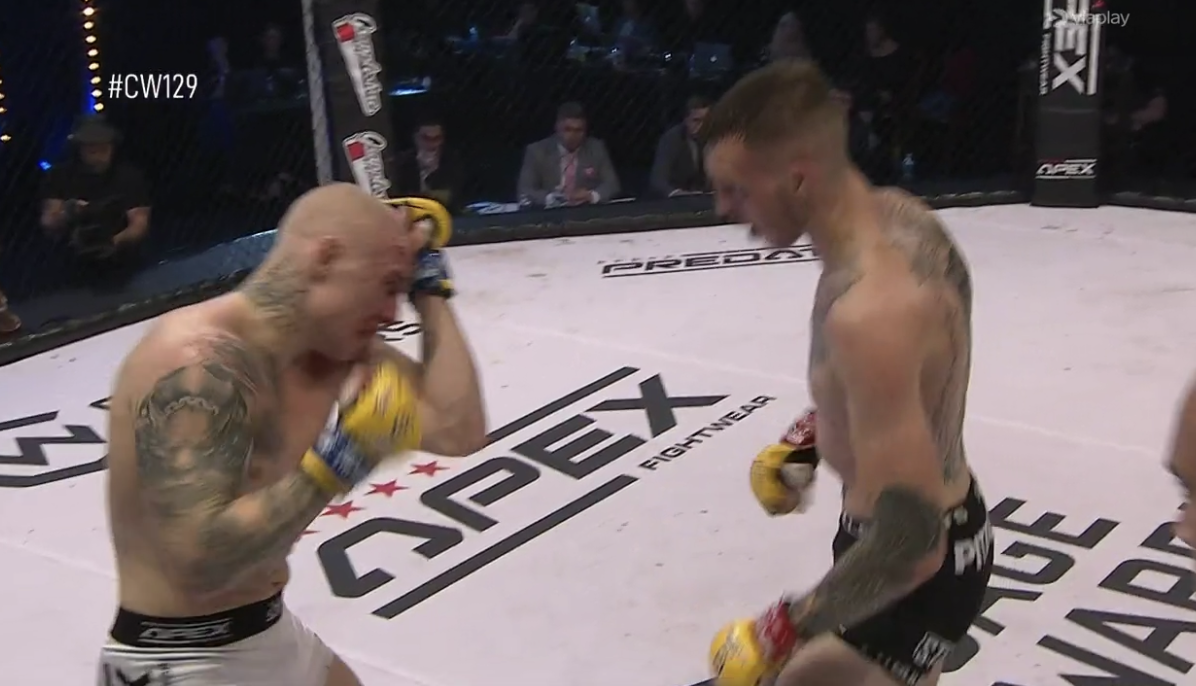 A BIG uppercut, and the referee jumps in to stop the fight.  TKO for Mckee.