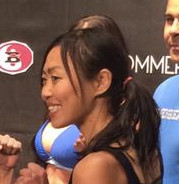 Norway’s Celine Haga (8-13) got back on the winning track at BAMMA USA’s Badbeat 16. The fighter representing New Mexico’s JacksonWink MMA submitted Alyssa Garcia (1-3) in the first round by arm-triangle choke, ending the bout at 4:49.

Haga won the atomweight fight getting back on the winning track, after losing in May at FFL Epic Evolution by decision. Garcia is out of Tillis BJJ and is also coming off a loss at Rocks Xtreme MMA 11 in January.

@WMMANews That was a good comeback. Alyssa was winning that entire fight from her back up until the final ~20 seconds. Nice win for Celine.