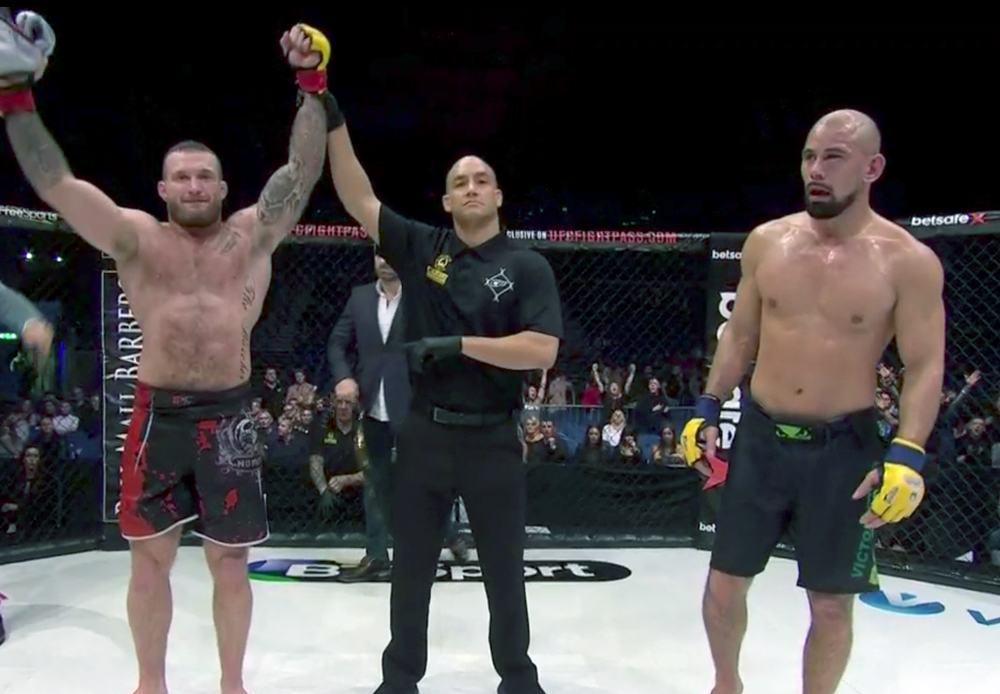 Victor Cheng faced Lee Chadwick in the co-main event of Cage Warriors 88 at the Echo Arena in Liverpool, England for the vacant Cage Warriors middleweight title. The Swede lost out by unanimous decision as the bout went the full twenty-five minutes.

Round 1: Both men start tentatively looking to try and figure out each others gameplan. Cheng misses with a high kick but lands with a low kick. Both men seem to be hesitant to start throwing, with the crowd beginning to get restless. The Swede is pressing the pace more with Chadwick circling with his back to the cage. Cheng lands a hard leg kick, but neither fighter is throwing at volume. Cheng lands with the low kick again before Chadwick catches it and takes the fight to the ground. Cheng finds his balance but Chadwick is looking for a standing guillotine… but the Swede recovers and the fight goes back to the feet. Chadwick looks for an overhand right but Cheng counters. The first round is in the books and it’s a close one to score.

Round 2: Chadwick and Cheng exchange leg kicks, but again both men are hesitating. Cheng lands a head kick, but it lacks power. The Swede is pressing the pace and keeping Chadwick at range. The Liverpudlian lands an overhand right followed by a low kick, but neither fighter is doing enough to sway the round in their favour. Cheng continues with the kicks, landing a body shot. The Swede lands a takedown and Chadwick works his way up. Cheng puts him back to the mat and tees off from the back mount. Chadwick recovers and the fight goes back to the feet with the Englishman landing an overhand right. Cheng answers back with a right of his own and Chadwick lands a left hand counter. The Swede clinches up and lands a couple of knees to the body. Chadwick goes for the overhand right and it lands but Cheng comes back with a leg kick before landing a right hand across his opponent’s face. Another close round, is the takedown enough to give that round to Cheng?

Round 3: Chadwick and Cheng are now throwing, both men exchange overhands before they separate. Big right hand by Cheng and Chadwick backs up. A right and left land and Chadwick looks tired. The Liverpudlian is breathing heavily to the point you can hear it cage side, but he times a takedown perfectly and looks to rest in the guard. Chadwick looks to land from the guard, but there isn’t a lot of action. Neither fighter is working and Cheng stands up. Chadwick has the standing guillotine and Cheng is lifted in the air. It looks tight! Cheng pops his head out! Chadwick presses the Swede against the cage and the third is in the books.

Round 4: Chadwick lands a left hand and Cheng comes back with a right. The Swede certainly looks the fresher of the fighters, but neither men is pressing a high pace, both are exploding in short spurts. They exchange leg kicks before Cheng lands a left followed by a headlock. Chadwick comes back with a leg kick but Cheng catches him with a left-right combination. They clinch momentarily but Chadwick lands a well-timed left followed by a right. Chadwick now presses with the leg kicks before Cheng looks to land a right of his own and they clinch against the cage. Cheng is looking for the takedown but the Liverpudlian stops it well and they disengage. Chadwick lands a big right, followed by a left and ends the round with a leg kick. It’s close to score.

Round 5: Both men exchange overhands before Cheng lands the trip, falls perfectly into mount before taking Chadwick’s back. The Liverpudlian explodes out and recovers to half guard. Neither men are working, but Cheng looks to land a few strikes. Both are tiring and Chadwick tries to get up but Cheng continues to control his opponent. The Swede tries to move to mount but gets reversed and Chadwick is now in guard. This fight certainly isn’t a classic… Chadwick looks to land elbows, but they don’t have much power behind them. The referee asks for more action and Chadwick lands a couple of strikes. Cheng looks to take an arm but Chadwick continues to land strikes. The referee tells the fighters to stay busy and Chadwick again lands a couple of strikes.

Cheng gets back up and slips before Chadwick lands a takedown, which could be pivotal on the scorecards. The fight has gone all twenty-five minutes and both men can barely stand! We go to the judges’ scorecards… All three judges score the bout 48-47 in favour of Lee Chadwick.