Swede Chris Spång will face Alan Jouban on the main card of Resurrection Fighting Alliance (RFA) 9. The up-and-coming promotion announced the bout line-up for its Friday, August 16th event at the StubHub Center in Los Angeles and televised nationally on AXS TV.

“An explosive welterweight battle is also on tap, as UFC and Strikeforce veteran Chris “The Kiss” Spång (5-2) will face Hollywood based fighter, actor, and model Alan Jouban (6-1).” says the promotion about the matchup.

Chris “The Kiss” Spång will be the only Nordic fighter on the card. He has not fought since his April bout in the UFC in his home country of Sweden. The Swede lost a unanimous decision to Adlan Amagov. The Las Vegas based fighter has lost 2 of 3, and looks to get back on track.

Jouban has a 6 win and 1 loss record including 5 straight wins. He fights out of Legends MMA and last won in just under two minutes at Fight Club OC against Rigo Oropeza. 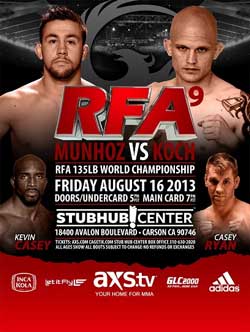 Allstars Versus the World at SFN’s Debut Event Tomorrow