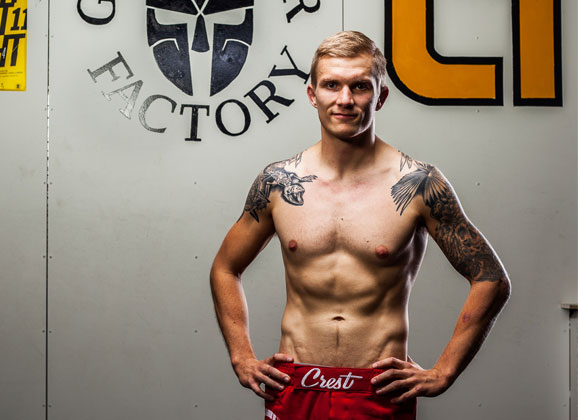 Check – twitter.com/gldtrfactory for any updates with the stream.

Teemu Matilainen, Team East Front, Finland vs. Herve Claire, France
Claire takes the bout to the ground early, and keeps the Finn on his back. The ref stands up the action, and Matilainen takes advantage of the situation with a slick takedown counter off a punch to the crowd’s liking.

A takedown from the Team East Front fighter and he is looking to rain down punches on the visiting fighter from France. Full mount as Matilainen methodically works his way to take the back, and he has a rear naked choke locked…. it’s tight. And the tap. It is alllllll over and the crowd goes wild with the second round submission.

Suvi Salmimies, Team East Front, Finland vs. Tanja Hoffman, Germany
Hoffman with a nice head and arm take-down early in the round putting the Finn on her back. Salmimies reverses teh position and is aggressive on top, landing good punches and eventually gets to full mount. Elbows and punches for the last couple minutes to end the round strong for Suvi.

The second round starts just like the first with a nice throw from the German, who now works in side control. Again it is Salmimies that reverses the position and she is looking to finish with punches from full mount. And after straight punches to the face battering the visiting fighter, it is stopped.

Salmimies wins with second round TKO.

Lauri Tonteri, Team East Front, Finland vs. Ville Vanhanen, JKL FC, Finland
Tonteri is aggressive and comes out swinging and eventually gets the fight to the ground where he stays on top for the rest of the round.

Vanhanen seems to be more comfortable on the feet and moves forward in the second round, but again it is Toneri with strong wrestling that brings the bout to the mat.  And more of the same dominant control for the Team East Front fighter.

Both fighters look for strike early in the last round, and a good knee from Vanhanen that needs this round to win.  After getting taken down again, it is the JKL FC fighter that is able to reverse positions off another takedown attempt and he is in full mount with big punches and elbows in the most damage of this fight.  Right hands over and over and over and this fight could be stopped.  The referee looks close, and it is over.

Vanhanen wins by TKO in the third round

Mikko Ahmala, Oulun Kamppailuklbi, Finland vs. Yacin Daji, France
Ahmala looks ready for this fight and after missing a right head kick, it is the French fighter that dives in for a take-down, but Ahmala quickly goes for a guillotine and it is tight… no arm and no room to breath.  Looks like Daji is out….. and now the referee realizes this, and the bout is over.

Jerry “ADHD” Kvarnström, Turun Urheilijat, Finland vs. Tommi Marttinen, Team East Front, Finland
Marttinen is talking ADHD early, moving forward while the more experience fighter is looking to counter.  The power of both fighters is evident.  Tommi is wearing red Crest shorts, and Kvarnstrom gets a hold of them as he moves for a takedown and gets it.  Marttinen locks in a triangle and it is tight… and it is over.  The Team East Front fighter is back.

Marttinen with a first round submission.

Jaakko Väyrynen, Team East Front, Finland vs. Martin Fouda, Sweden
The lone fighter from Sweden steps into the main event looking very cautious as the bout starts. Väyrynen also conservative, but bursts with a take-down attempt which is well defended by Fouda until he picks up the Swede and slams him on the ground.  But both fighters are up on their feet after briefly hitting the ground.  The Finn controls the fight against the cage, and tries to roll Fouda to the ground but ends up on his back.  The crafty Väyrynen takes advantage of being on the bottom by rotating around catching the knee in what looks to be a kneebar, and Fouda is in pain and the bout is over.  Väyrynen celebrates by jumping on the cage to celebrate.

Väyrynen wins by first round submission.