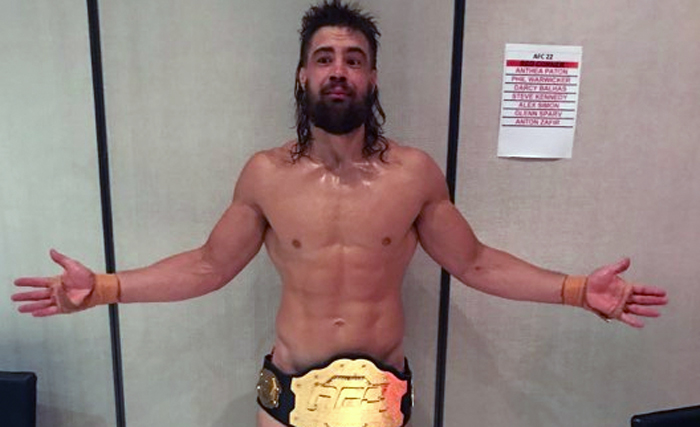 Glenn Sparv (18-4) is on a roll.  The Finn won his sixth straight fight as he captured the Australian Fighting Championship (AFC) belt in Melbourne today.  “Teddy Bear” beat Stu Dare (8-6) in the middleweight title fight which was the co-headliner for the event. “The mullet and the Hickman brothers (Tiger Muay Thai coaches)” says Sparv to MMA Viking about how he has turned around his career and been dominant since moving up to middleweight.

The Finn headlined the RFC: Way of The Dragon Taiwan card on February 3rd at the Taipei Arena in Taiwan, where Sparv beat late replacement Jun Yong Park in a light heavyweight bout.  And with this 3rd round TKO, the Tiger Muay Thai fighter is perfect in 2018.

And it’s all over! @GlennSparv with the TKO in Round 2. #AFC22 pic.twitter.com/56KkK0gLmH

“I hope to fight again next month but my leg is in kind of bad condition now so we’ll see tomorrow how bad it is” says Sparv.

Dare is out of Australia and had a three fight winning streak before suffering a first round headkick loss last November.  With the loss, he now has a 8 win and 6 loss record, and has fought quality competition including UFC’s Jake Mathews.

“Yeah I’m alright with six wins in a row, but I can always do better. As long as I’m winning I’m not gonna beat myself up about.” says the 29 year old.

“I know what I need to work on and I’m improving for every fight.”

Sparv turned pro in 2010 and has won his last 11 of 12 bouts.  The fighter out of Vaasa, Finland now trains full time out of Tiger Muay Thai & MMA in Phuket, Thailand.