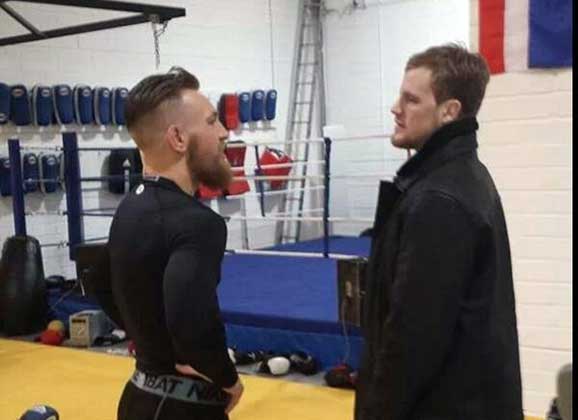 Iceland’s Gunnar Nelson is less than two months away from his return to the Octagon and will continue training with long-time partners starting with Conor McGregor. While headlines of a knee surgery and car crash have been most of the news surrounding Gunni in his year absence from the fighting, the Mjölnir fighter is back on track in preparing for his March 8 bout against Russian Omari Akhmedov.  The bout will take place at UFC Fight Night in London, in a card headlined by Swede Alexander Gustafsson and UK’s Jimi Manuwa.

Nelson recently joined McGregor, who is also recovering from surgery, for the opening of the new Straight Blast Gym Ireland. The gym is described on its website  as “home to MMA international heroes Conor McGregor and Cathal Pendred, is opening Europe’s largest MMA Gym at just under 10,000 sq ft. in Dublin to keep up with the demand of one of Ireland’s fastest growing sports.”

Also great to have my good training partner @GunniNelson back over for some work too!!! #PrimalMovement #NewEra pic.twitter.com/wqjJwsvkMM

“Gunnar will be staying in Ireland until the end of the month training with our friend John Kavanagh.” says Halli Nelson, father and manager of Gunnar, to MMAViking.com.

Nelson and McGregor are a bit unusual in their approach, as John Kavanagh conditions his SBG fighters to always be ready to fight any opponent and not stay too focused on one specific approach or fighter.  While this might be seen as the end of Nelson’s “camp”, Halli Nelson see it differently. “To be honest we don’t really do camps. We believe in training the whole year round and we do not change it before a fight”.

“John will be coming over in February and probably some friends from Ireland like Cathal Pendred and Conor McGregor.” says Nelson about the final stages of preparation before heading into the Octagon again.

The welterweight has not fought since his bout in February of this year against Jorge Santiago. Nelson won this bout, which was his second in the UFC, improving his overall record to an undefeated 11 wins, 0 losses, and 1 draw. He previously beat DaMarques Johnson in his Octagon debut in 2012.