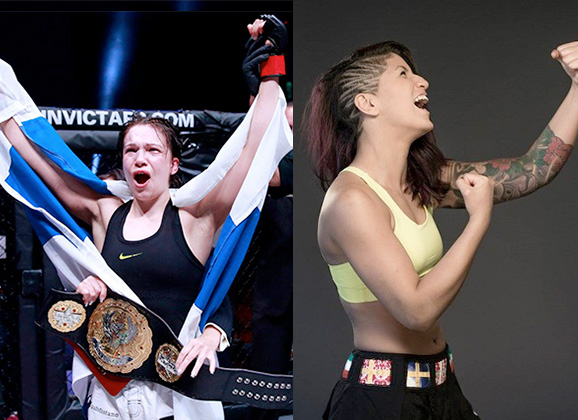 September 12th will be a big night for women’s Nordic MMA. On that night, Invicta FC 14 will feature two Nordic fighters for the first time in the promotion’s history. In even bigger news, the two fights will be the headliner and co-headliner. Swedish fighter Pannie Kianzad and the Finnish fighter Katja Kankaanpää will be representing Nordic MMA at the American event.

In the main event of the evening, Kianzad will be taking on powerhouse Tonya Evinger for the bantamweight title. At 34 years of age, Evinger has experience on her side with 21 professional bouts under her belt.

This doesn’t make Kianzad nervous. The “Sexy Scramble” is prepared. “I’m ready, I’m game, and I have been around a while now,” she told MMA Viking. Coming off of a unanimous decision in her first Invicta fight, the undefeated Swede could be crowned the next bantamweight champion.  This would add another belt to her collection, which already includes the Cage Warriors strap.

In the co-headliner, Kankaanpää will be fighting the undefeated straw-weight DeAnna Bennett. The Finnish fighter lost her last fight, trying to defend her newly won straw-weight title. A win would bring the “Killer Bunny” another step closer to regaining the title. Her plan for winning the fight? “I have my own style, so we train in a way that I can force her to fight at my pace and take the fight where I’m strong,” the former champion told MMA Viking.


You don’t need to wait for the last two bouts to tune in to the fights. There are a total of ten fights on the card and the card is stacked with interesting match-ups. Decorated kickboxer with a 2-1 record, Andrea Lee will be fighting Rachael Ostovich, a Hawaiian fighter on a two fight winning streak. Both fighters are relatively new to professional MMA but cleaned up the amateur circuit.

Roxanne Modafferi, former TUF contestant, is also on the card. Since her appearance on TUF, she has made major changes to her game. She will showcase her skills against 20 year old Mariana Morais.

You can catch the Kansas City, Missouri action on UFC Fight Pass and get live updates here on MMAViking.com.