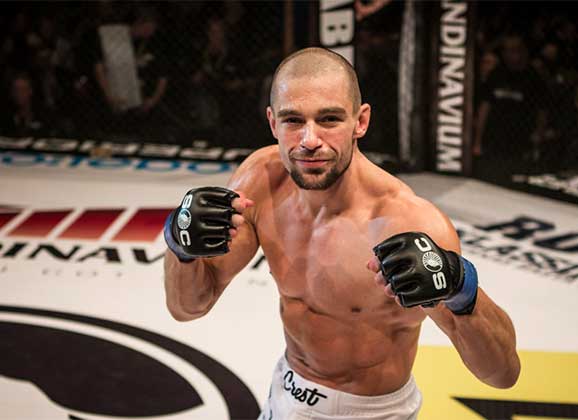 The much anticipated rematch between Finland’s top lightweight Anton Kuivanen (20-7) and American slugger Eric Reynolds (18-7) will not be taking place as planned on the Cage 26 card 5th of April in Turku, Finland. The title fight was set to headline the card, but it has been called off due to a Kuivanen rib injury. Conent partner Fightsport.fi and the promotion announced the news this morning.

Kuivanen wanted this rematch since last September when the Finn suffered a shocking 30 seconds knock out loss at Cage 23. Now it looks like Kuivanen chance to even out the score will have to wait.

The Finn was training at ATT in Florida in preparation for this bout and a slot on Helsinki Fight Night.  His injury won’t require surgery.

Kuivanen’s most recently stopped Swede Diego Gonzalez, which was chosen as KO of the Year by MMAViking. At GCE the Finn scored another quick stoppage when he dropped Spaniard Oriol Gaset with a crushing knee strike in the first round.

Finn Timo-Juhani Hirvikangas versus Tymoteusz Swiatek will now headline the card for the bantamweight title.