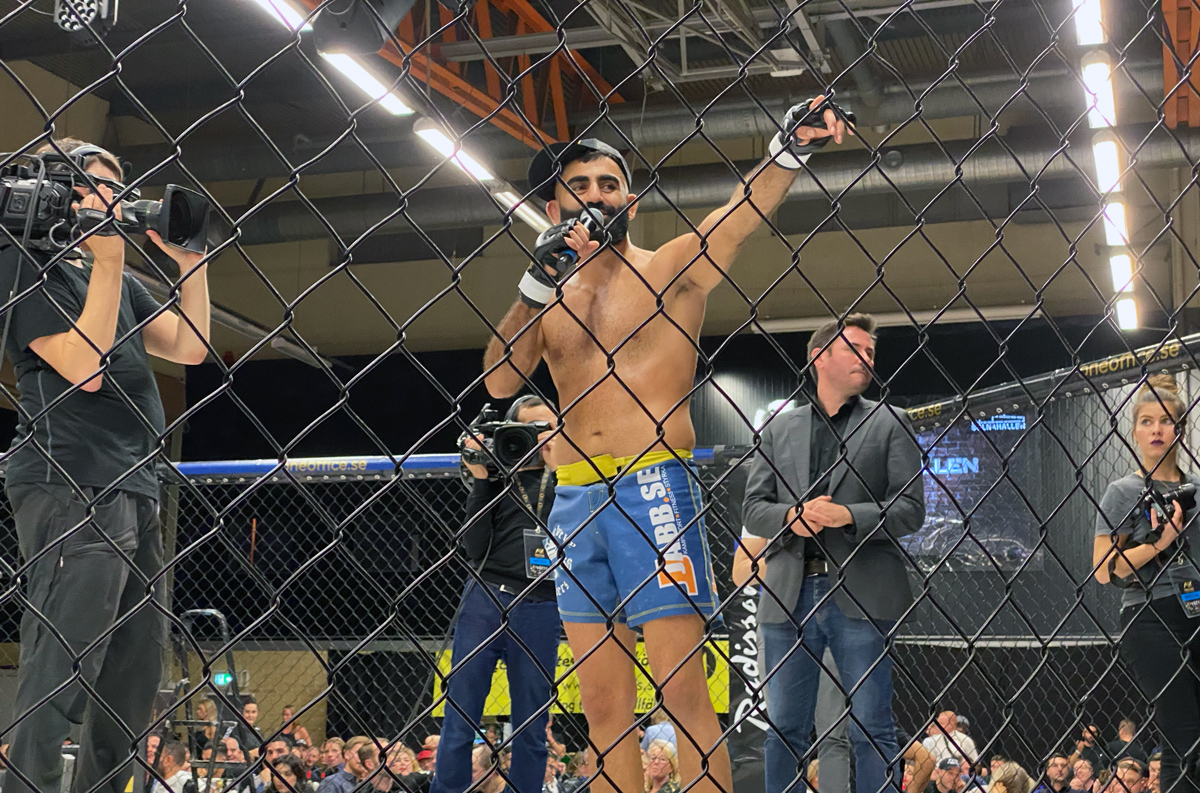 MMA Viking is live in Solnahallen in Stockholm for AK Fighting 2. There are 12 fights on the card.

Lightweight: A-klass: Wasiu Idowu vs. Tobias Söderberg
Tobias with a nice lateral drop take-down, but Wasiu reverses in the first.  Söderberg set on getting the fight to the ground, and gets another takedown, but reversed again in this evenly matched bout.  Idowu controlled most of the third.  Söderberg wins by split decision.

74 kg – A-klass: Abdallah Habib vs. Navid Badi
Badi is pumped up to be in the cage!  And the cheers from Habib are pumping through Solnahallen.  A takedown for Navid, and back up for Habib that lands a few big knees in the first.

Navid immediately in on the legs, but Habib gets in the clinch and just lands brutal knee after knee to a near finish, but Badi is tough and survives the second.  In on the legs again, it is Navid in control of the Stockholm fighter that gets in a good punch on top to end the fight.  Navid Badi wins by decision.

Bantamweight – Kevin Osorio vs. Anton Larsson
Takedown for Kevin that is making his pro debut versus Larsson that stepped in on 3 days notice.  Kevin controlling on top as the Umeå fighter battling to get out but can’t make it happen in the first.

Larsson in for a take-down attempt, but defended well.  Quick take-down reversal for Kevin, and on top again.  Looking for a rear-naked choke, and he gets it at 4:12 in the second.  Submission victory for Kevin Osorio.

Catchweight (63 kg) – Bilal Tipsaev vs. Martin Fouda
Bilal with double leg take-down that turns into an over the back slam.  Wow.  Then rides out the rest of the round on top.  Brutal calf kicks from Bilal, then he is back in on a double leg take-down.  Moving to half guard and controlling the rest of the round.  In the third it is another take-down, and move into top position for ground and pound for the finish.  TKO at 1:28 in the 3rd round.  Bilal Tipsaev wins by TKO.

Bantamweight – Bernardo Sopaj vs. Darius Buda
Sopaj with a dominant first round, getting on top and landing solid ground and pound. Buda tries a spinning kick to start the second, but is met with a kick and punch. Quick left jab from the Allstars Training Center fighter, and a take-down to get back on top. Darius turns over and immediately it is Bernardo to secure a rear-naked choke finish. 3 minutes and 3 seconds into the second round, victory for Bernardo Sopaj.

Lightweight – Saeed Ganji vs. David Jacobsson
Stocholm versus Halmstad in this showdown. Jacobsson landing early and cuts Ganji. Nice low kick from the Halmstad fighter. Saeed catches a kick and David goes to his back. Back to the feet, and this looks to be Jacobsson’s world and now Ganji has cuts over both of his eyes. Good back and forth to end the round, with some spinning stuff from the Allstars Training Center fighter.

The pace has slowed and David looking to use his jab. Saeed presses the action, and likes to counter with spinning punches. Not much action, until David lands a low right kick and a body shot. Saeed in on a doube-leg, but David quick to counter with a guillotine.

This might decide it, unless some judges gave David the first two rounds. Second was closer.

Titelmatch Middleweight Amateur: Nabbe Malki vs. Ahouzi Michael
Kouname
Some solid kicks and punches from the French fighter training in Stockholm Michae. But Malki is the big fan favorite and gets the fight to the ground, and the 2000+ fans are going nuts. Spirited second round with Nabbe pressing the action. An all out brawl in the third round.

Nabbe Malki wins by split decision. “It is an unbelievable feeling. I worked hard for this. This is my prize.”

Strawweight – Elin Öberg vs. Elizabeth Rodrigues
The two exchange punches, and Rodrigues changes levels and gets the take-down and is on top. Elin is down and the Portugal fighter grabs a rear-naked choke. Elin stays calm and eventually is able to stand up. Elin is quick and lands, but is again taken down by Elizabeth. Back to the feet, where Elin lands a nice inside kick in an exchange.

The second round starts with a wicked high kick to the face from Elin, but once again she is taken down to the mat and put in side control. Rodrigues in control and landing some punches as the Swede is flat on her back. Now in full mount and taking punches, but Elin ties up the hands and eventually able to reverse the position. The fight goes to the feet, but little time as the Swede sneaks in some kicks.

Into the third round, and both fighters taking their time. Elin uses kicks and defends the first take-down, but not the second and put on her back again. Back to the feet and the Swede is landing as she alternates defending take-downs.

Middleweight – Jonatan Westin vs. John Redmond
The two came to trade power early. A tie-up along the cage. The two exchange again and Redmond lands some bombs that seem to rock Westin, and it’s wild on the feet, but Jonatan dives in for a take-down. And now elbows and punches and more punches to the face… and it is all over. 3:08 by TKO win for Jonatan Westin.

Titelmatch Featherweight – Frantz Slioa vs. Fernando Flores
The fight did not happen. Slioa had to withdraw due to sickness at the last moment.

The 10 minute match was a draw. Madadi got the take-down then stayed on top for the duration of the bout.  The two embraced and raised their hands together and exchanged shirts.  “Love is the way” said Madadi in his post-fight interview.