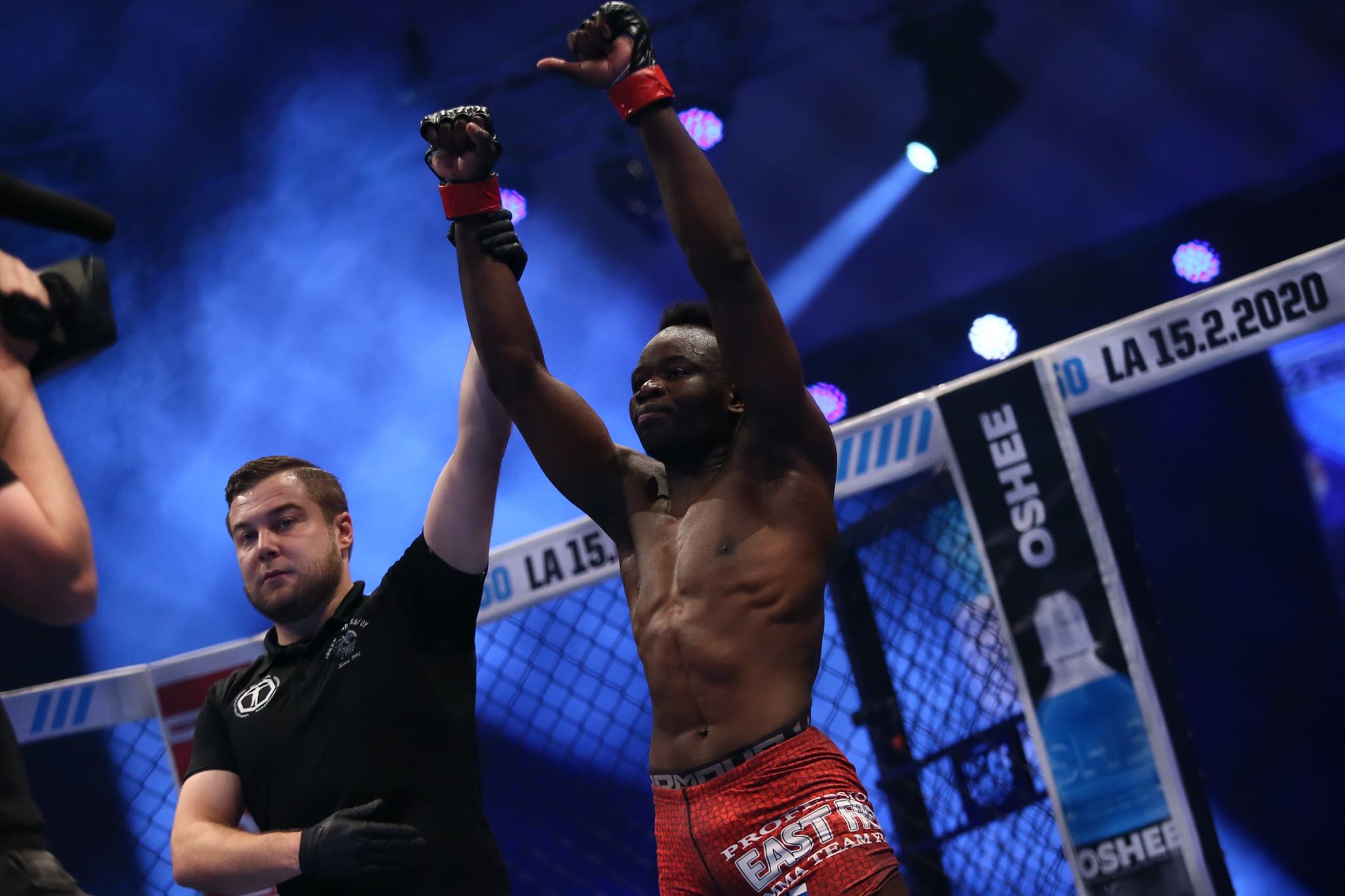 MMA Viking is live in Helsinki for Cage 49.  The card is headlined by Finn Edward Walls (8-5) taking on Andrey Hohlov (10-8) and co-headlined by Jesse Urholin (4-0-) facing Tazo Bochorishvili (7-1).  Get all your live updated here. 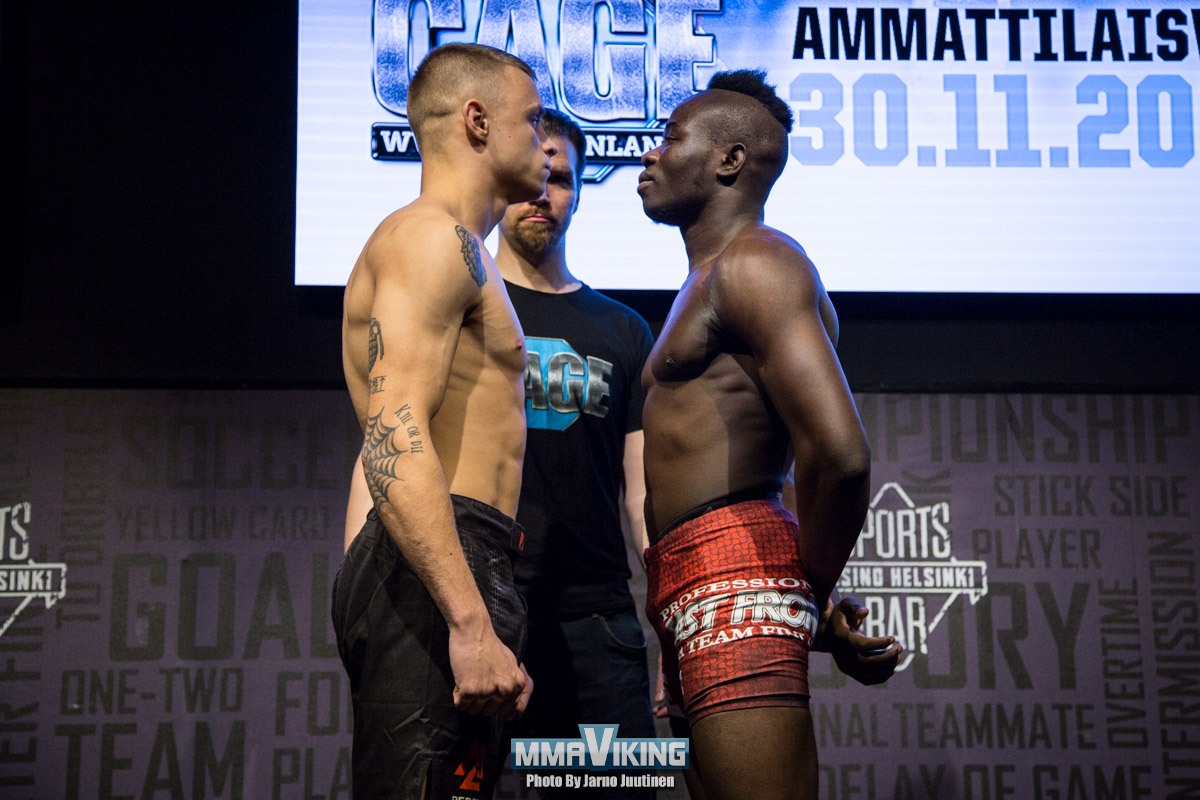 Dourthe begins the match with a quick blitz forward and the two fighters meet in the center. The French fighter lands a hard leg kick, but Chabbi backs her up with her hands, then lands a leg kick of her own. The two exchange, quickly moving past the feeling out stage. Chabbi attempts a kick to the body, but is taken down, and quickly scrambles out to regain her feet. Chabbi lands a hard right hand, and blasts the French fighter with a body kick. Dourthe pushes forward with a takedown attempt, which is stuffed against the cage, and after the two fighters jockey for position, Dourthe is able to throw Chabbi to the mat.

Chabbi takes the center early, and the two briefly clinch, but nothing comes of it. Dourthe appears to receive an eye poke, as the ref stops the action, but it is quickly resumed. Both fighters trade right hands, but Chabbi appears to land more solidly. Chabbi backs Dourthe up with her hands once more, but Dourthe circles, and looks to trade, backing up Chabbi in turn before the two once more meet in the center. A hard left hand lands for Chabbi, then another that has visibly battered the left cheek of Dourthe – leaving it swollen and bruised, and slowed her pace. Dourthe clinches, and throws a knee up the middle, but Chabbi throws a stiff jab that backs up Dourthe. Dourthe attempts a takedown and is stuffed. The second attempt sees a sprawl from Chabbi briefly in the top position, but Dourthe regains her feet, and presses Chabbi to the fence, finishing the round with a toss to the mat. 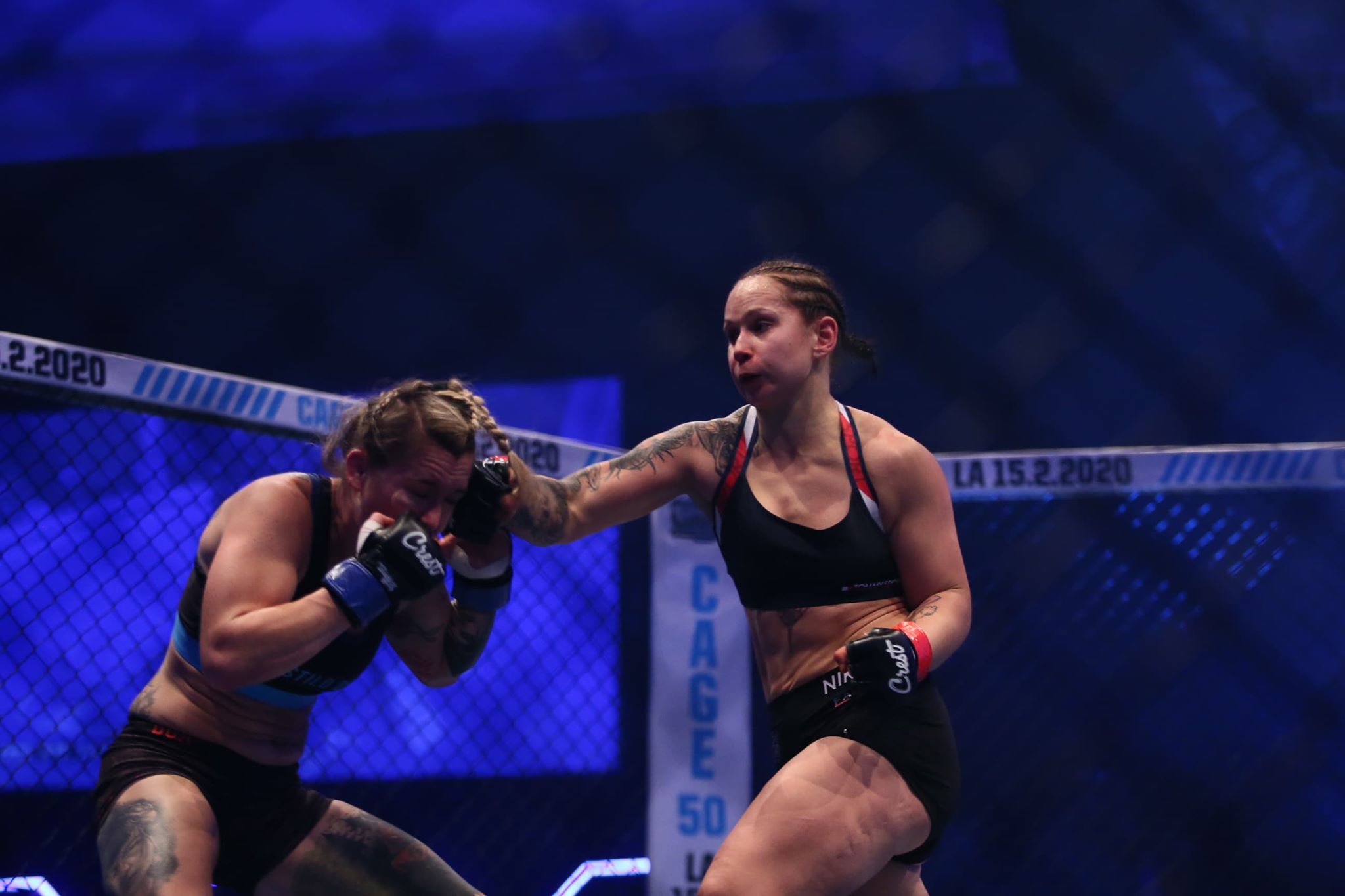 Round 3 begins with a left hook for Chabbi, but Dourthe is applying forward pressure. A leg kick lands for the French fighter, and she attempts a level change to no avail. Chabbi is working the jab from the outside, and appears to be coming away from exchanges with better success, but she takes a spinning back fist that visibly stuns her, and is taken down by the French fighter who attempts to land shots from Chabbi’s guard. The referee is not impressed, however, and stands them up. Chabbi regains the center of the cage, and eats a left hand, but continues to pressure forward. A takedown attempt from Dourthe us shrugged off, and with 10 seconds left Dourthe attempts a takedown, but it is denied by Chabbi, who finishes the round fending off a single leg. 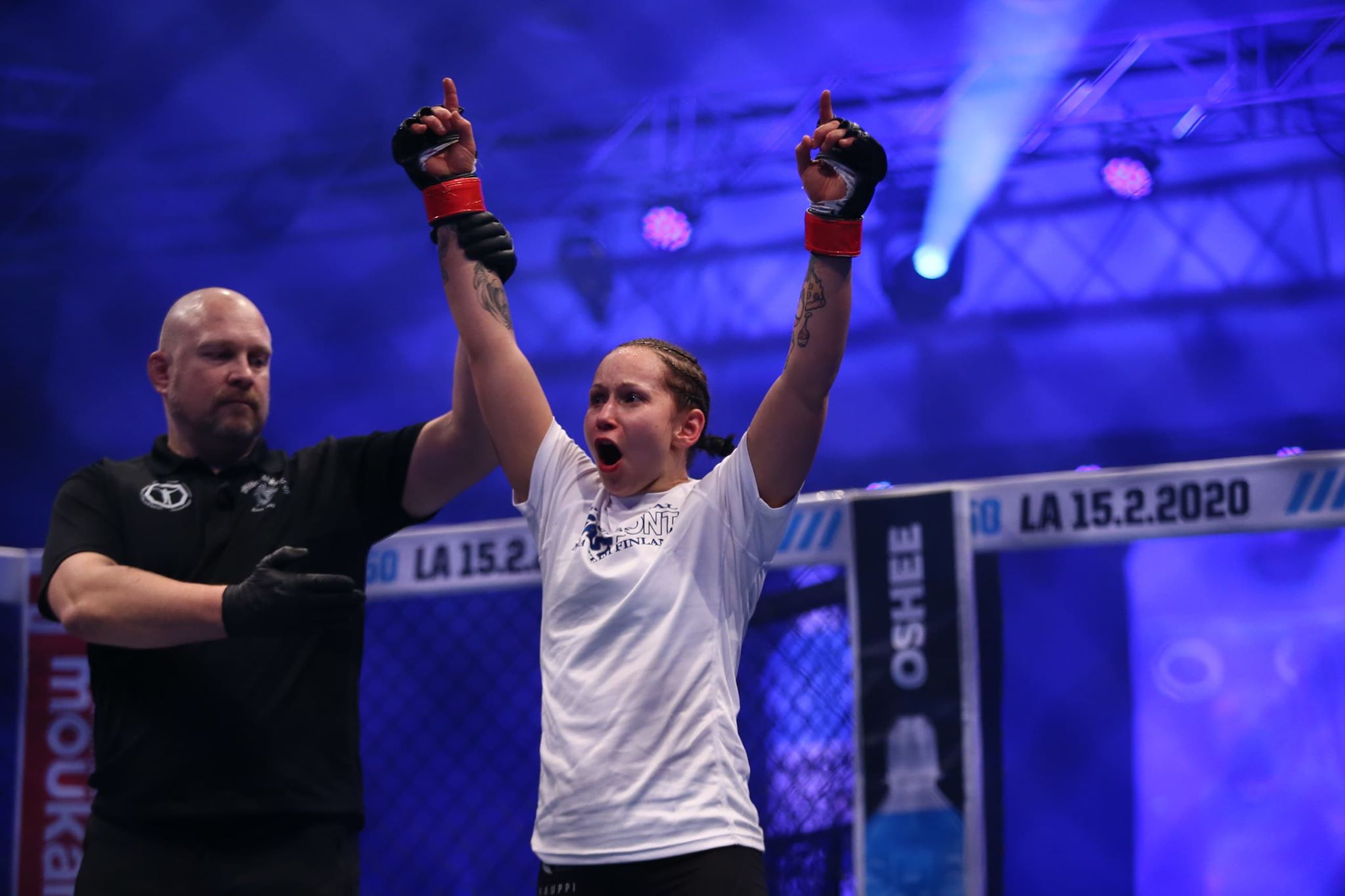 After three rounds, the winner by unanimous decisions is declared to be Chamia Chabbi.

Round 1
Tani begins the round with a combination and a takedown, and quickly finds himself in an arm-in guillotine. Taziashvili is warned for grabbing the cage as he attempts to regain his feet, and the two are separated during the warning. Tani, however, takes Taziashvili down once more, but Taziashvili grabs the cage once more on the way down. Tani reverses position, and winds up on top, where he begins to unleash hell on Tani. Tani takes some hard shots, and one of them puts the lights out, but Tani keeps uncorking brutal shots from the top until the referee steps in to save the unconscious Finn.

Winner, by way of Knockout at 1:52 seconds of the very first round, is Archil Taziashvili.

As the round begins Gronvall quickly takes the center of the cage, and shoots deep for a double leg, which he secures with ease. Gronvall isn’t able to posture up, and the referee warns for action. Gronvall uncorks a shot from the top that sends the crowd cheering, and starts to open up with close elbows. Mirzoev does well to control Gronvall’s posture, but it isn’t enough to stop the elbows. Gronvall continues to land as the one minute call is made, and Mirzoev desperately attempts to end the onslaught by tying up Gronvall’s hands until the ref stands them up. On thefeet Mirzoev is all fire and fury, and comes out blazing with heavy swings which are largely avoided. He lands a body kick , and then another grazing kick before attempting a takedown to finish the round.

In round 2, Mirzoev backs up Gronvall early, and pushes him to the cage where he atempts a single leg. He doesn’t find it, and so begins to uncork heavy knees to the body of Gronvall, who returns fire to less success from the clinch. Gronvall snaps Mirzoev down and secures a front headlock, where he begins to uncork knees. After a number of hard knees to the head of Mirzoev, Gronvall takes him down, and finds himself in side control, where he puts his knees to use pounding the body of the Russian fighter. Just past the one minute mark, Mirzoev rolls and finds himself in a D’Arce choke. The referee believes Mirzoev is out, and calls the fight, but Mirzoev appears lucid, and protests as the match ends. 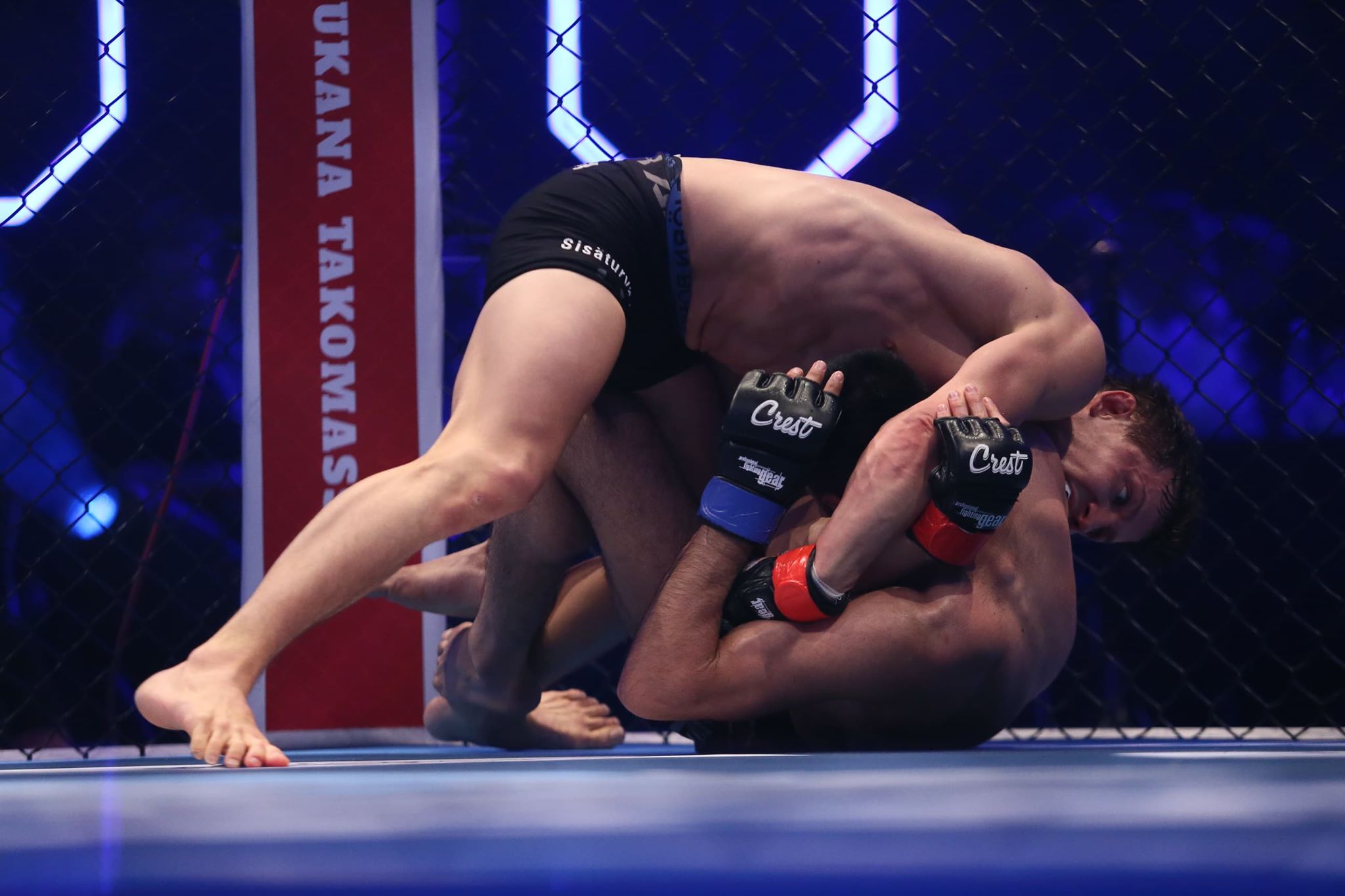 Winner by way of Submission (D’Arce Choke), at 4:42 of Round 2 is Tuomas Gronvall.

Osipov takes the venter eary, and tags Lintula with a shot as he backs him to the cage. A left hook and a body kick land for Osipoc, but Lintula times the takedown, and mounts the Russian, who is warned for punching to the back of the head. Lintula slaps on an arm triangle, and moves to side control, but can’t finish. As the Russian scrambles, Lintula is all over him, and maintains the top position. Once more, the Finn is in mount, but now his weapon of choice are elbows, and one has cut Osipov above the right eye. Osipov attempts to sit up against the cage, and in so doing gives the Finn his back. With one minute remaining, the Finn slaps on a rear naked choke, and begins to constrict with brutal force, until Osipov is forced to submit. 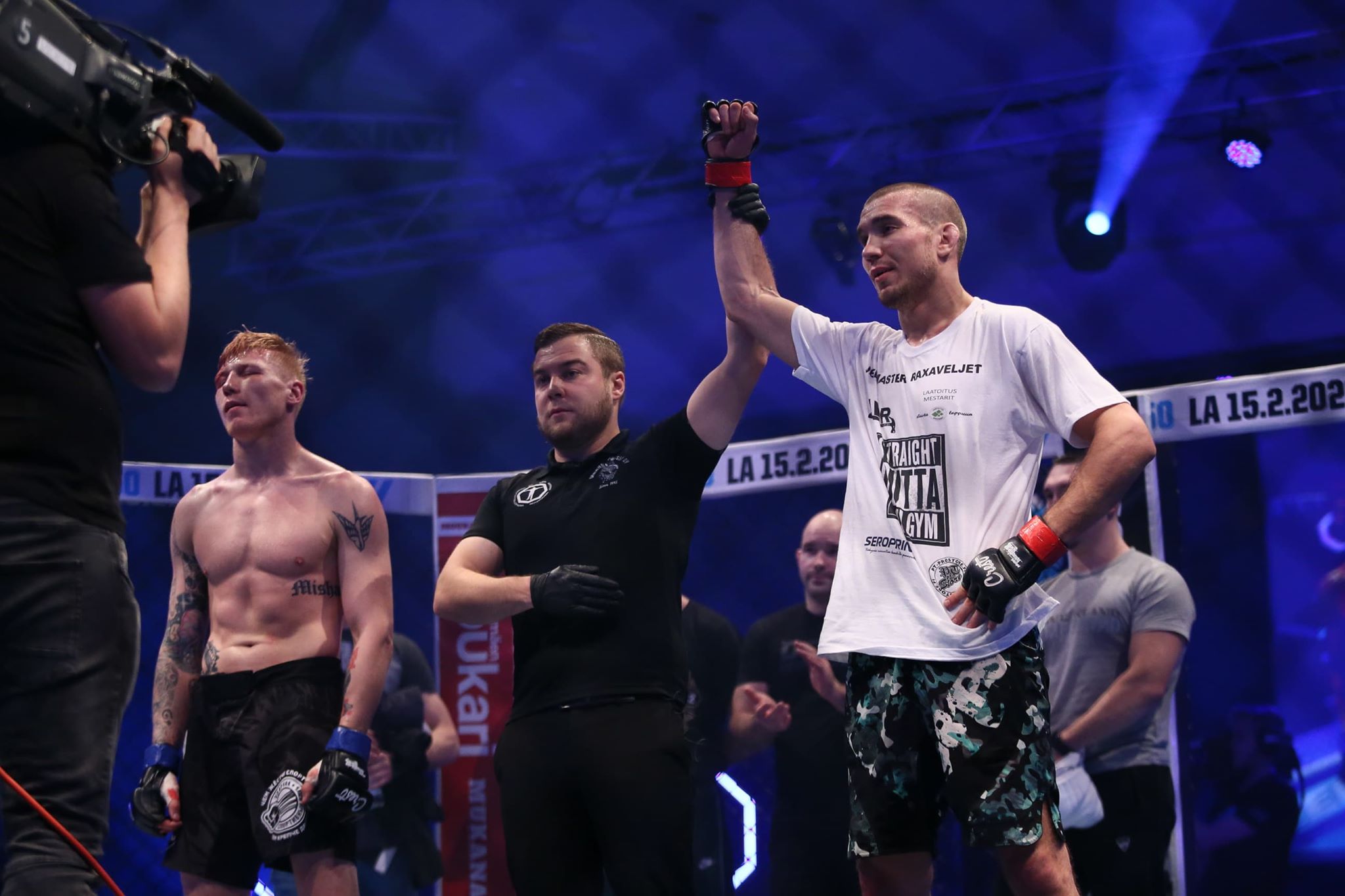 Winner by way of Submission (Rear Naked Choke) at 4:17 of the first round, is Henri Lintula. 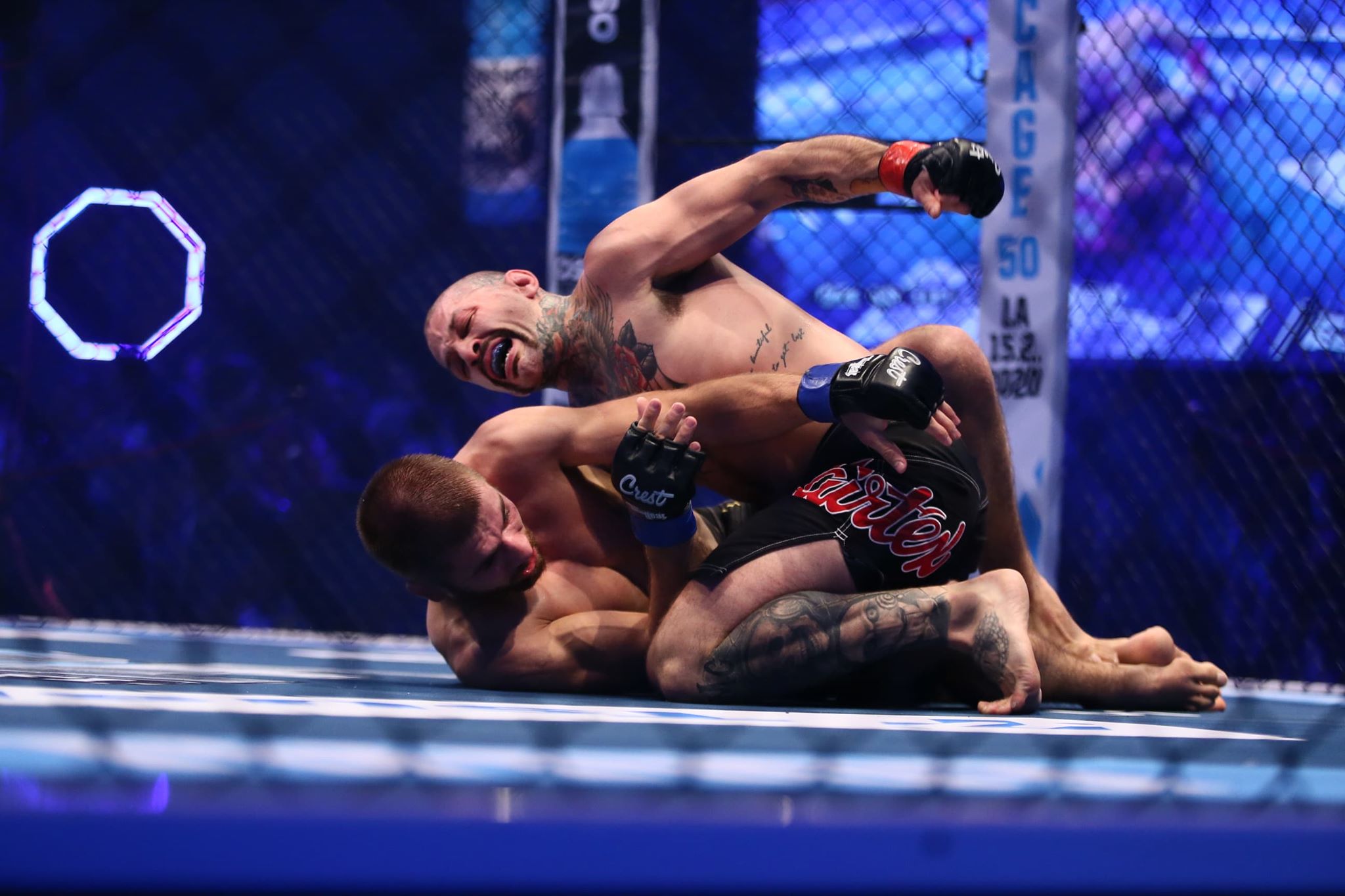 As the second stanza opens, Rytohonka applies pressure early and secures a takdeown. He traps the Estonian against the cage and takes his back, but Hutrov is able to regain his feet. Rytohonka hits the Estonian with a hard shot, and Hutrov dives for a takedown. It isn’t effective, but secures his position and gives him a moment to collect himself. His respite is momentary, however, as the Finn tosses him to the mat. Hutroc scrambles and takes down the Finn, but Rytohonka wins in the subsequent scramble, and finds himself in top position. Rytohonka pushes Hutrov against the page and begins uncorking hard shots on the Estonian, who tries to improve his position as the horn sounds the end of the round.

The Finn once more secures an early takedown, but Hutrov diligently works his way to his feet once more. Rytohonka is unfazed by this, and dumps Hutrov to the mat once more. Hutrov struggles up again, and his efforts are denied as he is returned to the mat by the Finn, who begins to drop elbows on the Estonian fighter. The Finns is busy fervently applying damage as the 10 second signal is given, and he finishes the round controlling his opponent on the mat. 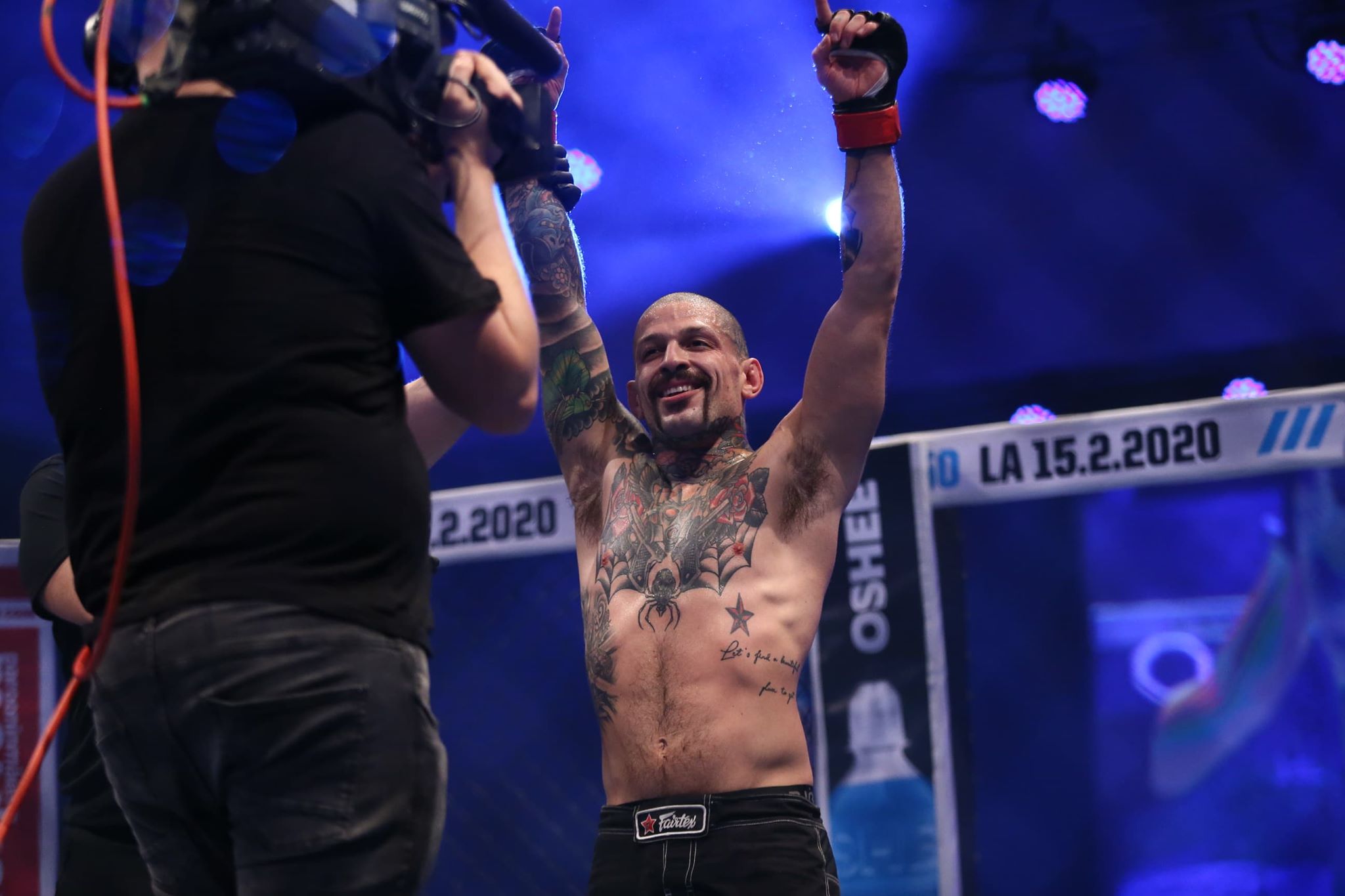 After three rounds, Markus Rytöhonka is declared the winner by way of Unanimous Decision.

Urholin takes the center early, and tosses Bochorishvili to the mat with a big throw. Urholin immediately begins unleashing hell and fury by way of massive shots from the top, bloodying, battering, and finishing Bochorishvili with haste. 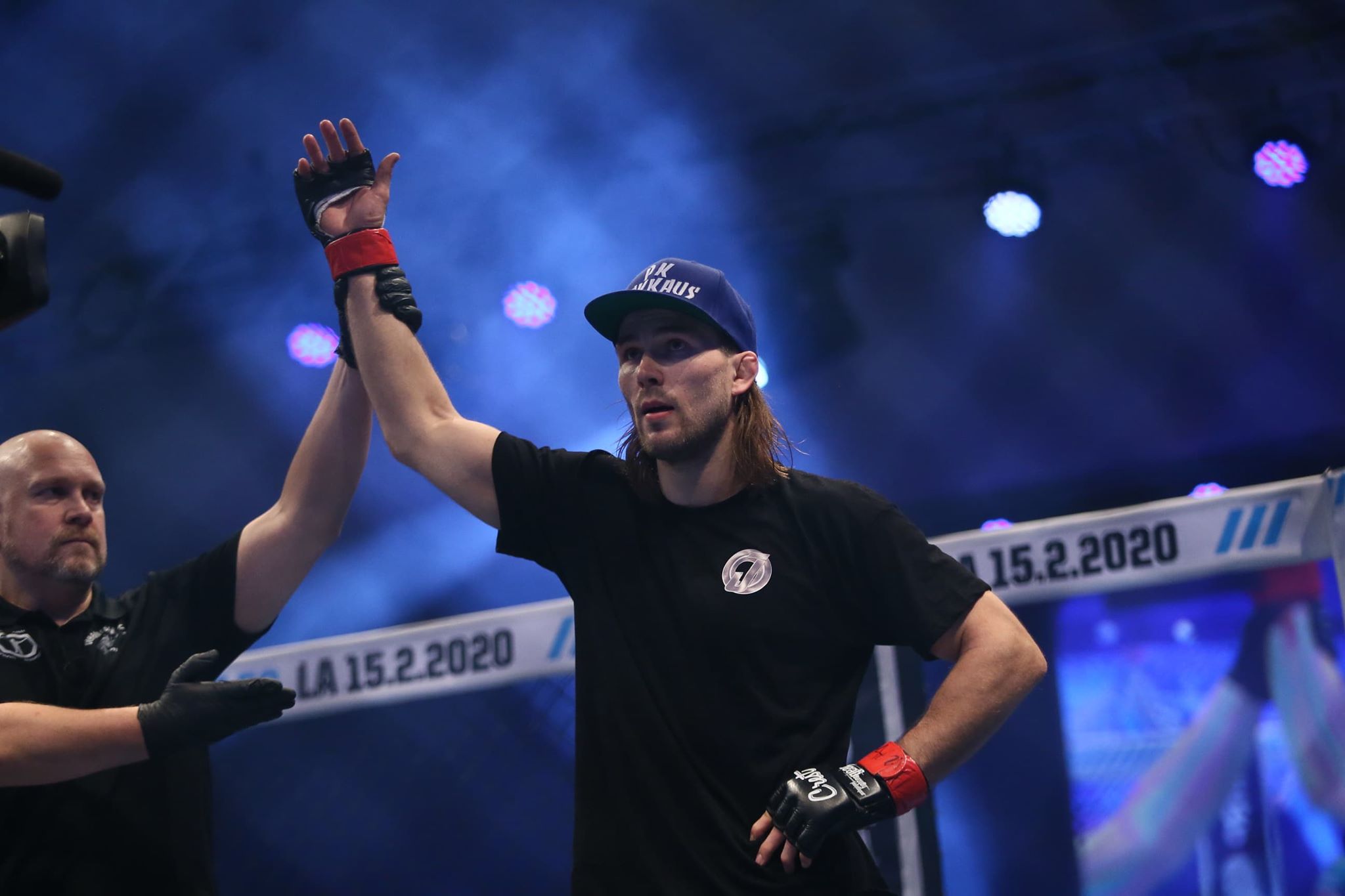 Jesse Urholin is declared winner by way of TKO at 1:05 of the first round.

The match begins with hard shots landed early by both fighters. Walls takes a left hand that gives him pause, and Hohlov pushes him to the fence looking for a takedown. Without adequate work in this position, however, the referee warns the Ukrainian fighter to advance his position. Walls, however, is the one who advances, however, taking Hohlov down. The Finn goes to work, improving position, taking the back of Hohlov, and sinking in a rear naked choke – Walls constricts and crushes his way to victory.

Edward Walls is declared winner by way of Submission (Rear Naked Choke) at 3:25 of the first round.