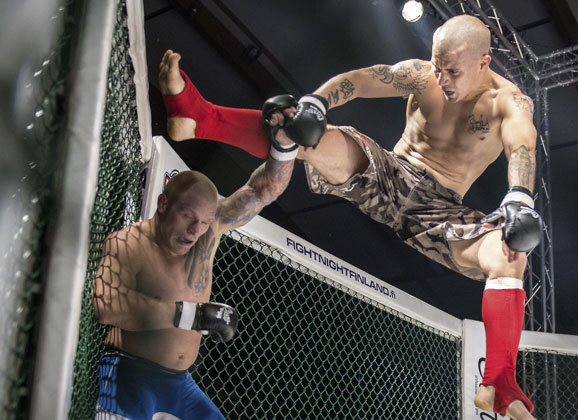 Fight Night Finland (FNF) 10 goes down in Turku Saturday night at the Kupittaan Urheiluhalli. MMAViking.com is live for the quality card of amateur and professional MMA, with co-headliner between Finn Jani Salmi and the UK’s Sean Carter and the main event of Primus Fight Team’s Juho Valamaa against Frenchman Jason Ponet. Plus Minna Grusander pro debut against Sweden’s Iman Darabi. Get your live results with pictures from iikka nikkinen and interviews to follow shortly after.

Round 1.
First round starts aggressively as neither fighter is holding anything back. Koskinen lands nice clean hooks and uses his kicks effectively. Koskinen lands yet another strike to the head of Sormunen. Koskinen shoots double but Sormunen defends successfully. Round ends in clinch position.

Round 2.
Round 2 starts again with vicious punching by both fighters but neither scores significant advantage over the other.

Koskinen shoots for double leg and transitions to single. Take down is successful and Koskinen ends up in the closed guard of Sormunen. Koskinen is throwing bombs from top and Sormunen responds with elbows. Referee forces the fighters back to stand up. Round ends up in clinch position.

Round 3.
Careful striking initiates round 3.  Koskinen trips and Sormunen uses this opportunity to gain top control. Koskinen reverses the position and we are standing up again. Crowd cheers while Sormunen scores several significant strikes.

Result: Toni Sormunen wins with points. 3-0 on the score card.

Round 1.
First 30 secs of the round is spent standing up and trading punches. Fighters end up in clinch. Kulju proceeds to perform excellent double leg take down and ends up in the open guard of Koivisto. Koivisto locks triangle choke while 40sec left on the clock. Kulju slams the triangle open and proceeds to side control.

Technical difficulties prevent covering round 2 and round 3.

Round 1.
Lintula performs solid double leg take down. Fighters are currently in half-guard with Lintula being on top. Lintula lands several punches from top. Lintula submits Isometsä from top with a side choke.

Result: Lintula gains the W with side choke in round 1.

Round 1.
As round 1 start Eliassi shoots for immediate take down and succeeds. Eliassi passes to side control and throws some serious leather. Fight transitions back to standing up position. Eliassi gets another beautiful take down. Eliassi scoring points with solid ground and pound.

Round 2.
Fighters exchange some punches while standing until Eliassi gains another text book take down. Parviainen manages to regain guard and afterwards succeeds to get the fight back standing up with a sweep attempt. Parviainen’s work does not pay of since Eliassa executes yet another take down and lands in the guard of Parviainen.

Round 3.
This round repeats the previous two as Eliassi shoots and takes Parviainen down again. Significant amount of time from round 3 is spent in clinch.

Round 1.
First half of round 1 is spent in clinch position. Referee separates the fighters due to lack of action. Nylund attempts a take down and fighters transition to clinch. Nylund turns to turtle guard. Santalahti keeps pounding and throwing heavy punches from the back. Referee has seen enough and stops the fight 3:30 into the first round.

Round 1.
Most of the round is spent standing up and trading punches. Both fighters scoring points with vicious strikes. Neither one is running from the fight. Towards the end of the round Grusanders starts to find her range but Darabi is not clearly not ready to give up at all. Tough round for all, the fighters and the judges included.

Round 2.
Darabi starts aggressively and lands couple of solid combinations. After several minutes of kick boxing Grusander lands a hard and heavy combination of punches in to the jaw of Darabi. From clinch Darabi manages to get a take down but it’s Grusander who eventually ends up on top. 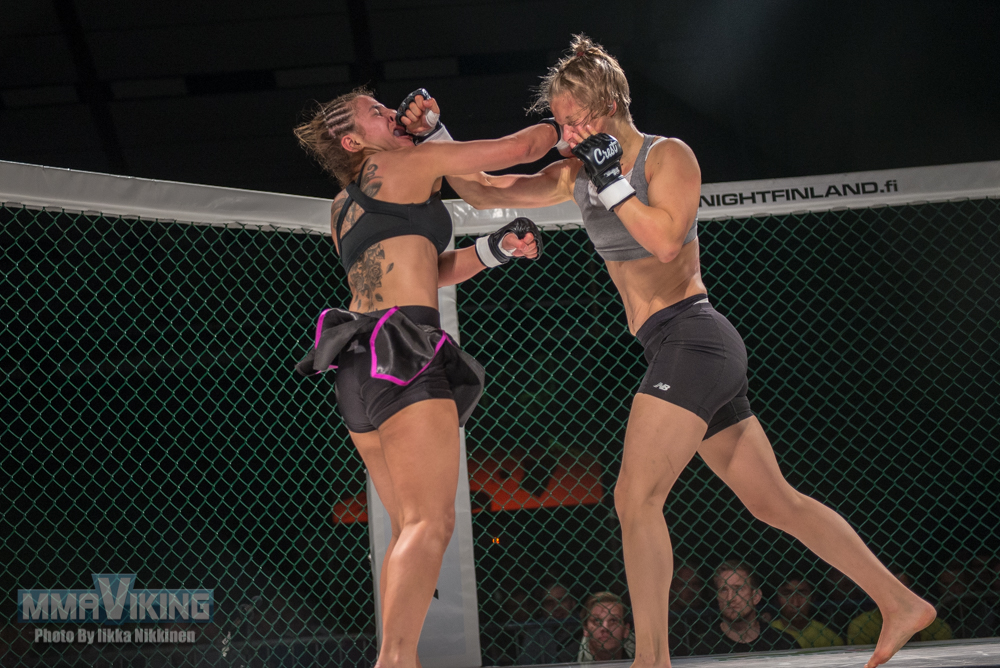 Round 3.
Neither one is ready to give up and keep delivering punch after punch. Grusander is bleeding from her nose. The Finn is repeatedly attempting to get the back of Darabi from clinch. Referee calls in for more action. Grusander keeps on working with the back and already has one hook in, but Darabi is defending effectively. Finally Grusander’s attempts pay off and she manages to get the back. Fight hits the ground and both hooks are in. Darabi is defending the choke, but is unable to get escape the back control of Grusander.

Round 1.
Toivonen executes a solid take down immediately in the beginning of the round and proceeds almost straight to mount. Toivonen throwing angry punches from mount. Russian gives he’s back to defend the strikes. Toivonen goes for a body lock. The Finn is softening Pomortsev with strikes and simultaneously attempting a rear naked choke. Toivonen gets the choke in and it is Tight. Pomortsev showing real guts and is not giving up and keeps striking the opponent. Toivonen transitions to straight arm lock attempt but the round is over and Russian gets another change.

Round 2.
Again Toivonen takes the Russian down this time landing in the guard of Pomortsev. Toivonen now in full mount. Pomortsev gives up the back. Toivonen keeps striking from back but so is Pomortsev. Another RNC is locked in. Referee stops the action due to Pomortsev losing he’s mouth guard. Pomortsev defends the RNC, but Toivonen responds with strong elbows. Toivonen transitions to arm lock position and straightens the arm. Russian taps and it is all over.

Round 1.
Both fighters immediately throwing heavy leather. Oleksii manages to get a take down and after a scramble ends up on top. Oleksii going for leg lock and therefore sacrificing the top position, but Kapanen defends and gains the top position. The Finn passes to side control and places solid pressure to the body of the Russian. Kapanen goes for a side choke but swaps that to full mount. Kapanen landing serious punches from high mount. More elbows from Kapanen to the face of Oleksii. Round ends with Kapanen being on the top and delivering solid punches.

Round 2.
Kapanen lands several punches and a kick to the head of the Russian. Oleksii has a bleeding cut under his left eye. Kapanen dominating the cage while Russian focuses more on counter punching. Both fighters landing punches. Oleksii finds success with multiple hooking over hand rights while Kapanen is mostly working with single power punches. During the round Russian is clearly rediscovering he’s confidence in fighting. Whole round was spend standing up and trading punches and kicks.

Round 3.
Kapanen starts aggressively but Oleksii is striking back and is now controlling the center of cage. Oleksii lands a perfect knee. Kapanen goes for a take down and succeeds after failed guillotine choke attempt by Oleksii. Kapanen is holding his opponent against the cage, but the Russian fighter keeps his guard open and goes for a sneaky arm bar from bottom. Kapanen is forced to tap.

Round 1.
Pietilä rocks Fournier with a punch to the face and Frenchman starts to bleed out of his nose. For a short moment immediately after the punch Fournier’s knees give up on him but he recovers quickly. Pietilä gets a take down but Fournier goes for a guillotine attempt in exchange. Pietilä escapes the choke and proceeds to punch from the open guard of Fournier. Pietilä pounding away from half guard. 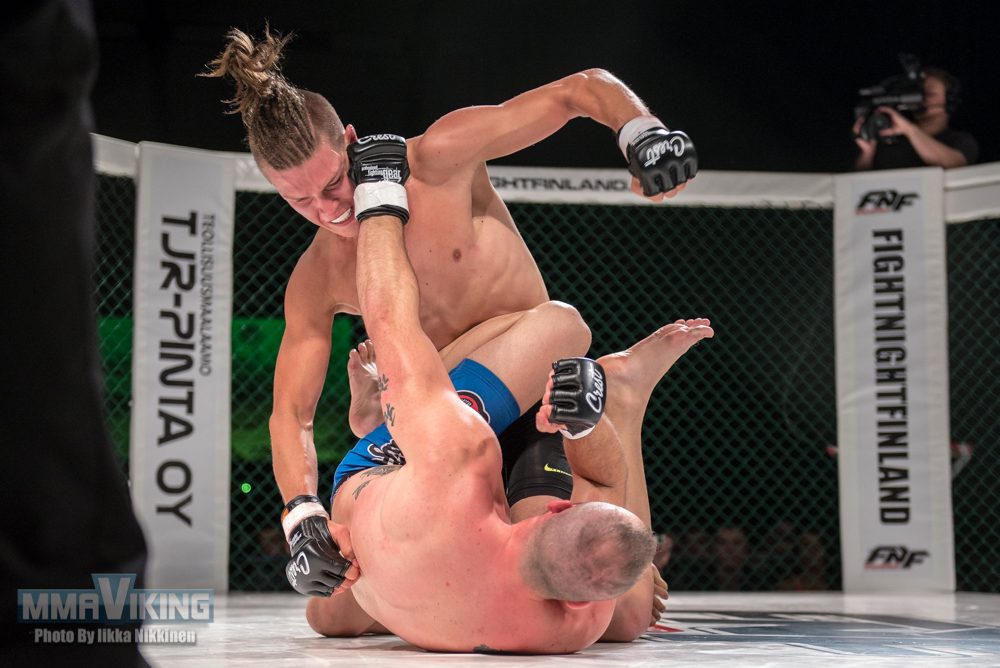 Round 2.
Pietilä scores a take down and lands in half guard from where he transitions to full mount. Frenchman is in seriously trouble while Pietilä keeps dropping bombs. Fournier gives up the back and Pietilä locks rear naked choke. Fournier taps and it is over!

Round 1.
Beginning of the round is spent in clinch & dirty boxing. Halkosaari scores a take down and starts raining knees to the body of Vilius from side control. Vilius manages to gain half guard, but is still in a tough spot. Vilius tries to sweep from half guard with “old school sweep”, but fails. Halkosaari is now in Vilius’ closed guard and keeps working with solid ground and pound. Vilius attempts a triangle but Halkosaari easily defends it and moves to side control. Halkosaari delivering strong knees to the body of the Lithuanian.

Round 2.
Immediately after round is started Halkosaari knocks Vilius out cold with left hook. Crowd goes wild and the fight is over.

Round 1.
Both fighters are patiently finding their timing while standing up. Khataev executes a flying knee and fighters end up in clinch. Kvarnström throws Khataev to the canvas but the Helsinki Hardknocks fighter recovers quickly back up. Now Khataev is on top with full mount. Kvarnström manages to reverse the position but ends on bottom again after a scramble. Back and forth battle in the ground is fought. Fight goes back up and Khataev lands a spinning kick to the head of Kvarnström.

Round 2.
Khataev is controlling the round with his explosive standup for the first minutes of the round. Kvarnström goes for a take down but fails. End of the round is mostly Khataev outboxing Kvarnström.

Round 3.
Khataev patiently picking he’s shots while he is controlling the center of the cage.

Round 1.
Neither of the fighters is holding back while trying to knock out each other. Salmi gets a take down but Carter quickly stands up. Carter connects with a nice combination. Salmi gets another take down and starts to throw punches from the guard of Carter. Salmi passes the guard into side control. Round is over as bruised Carter returns to his corner.

Round 2.
As fighters are trading punches Carter indicates that he was poked into the eye. Referee checks the situation and orders the fight to continue. Both fighters attempting to throw each other to canvas but is is Salmi who ends up on top. Salmi goes for a guillotine from top but quickly gives it up. Salmi passes to side control and starts to throw some heavy leather. Carter regains half guard after eating multiple punches from Salmi. Salmi keeps controlling the fight from top and forces heavy pressure towards the Englishman. Total control by Salmi from top. Carter goes for solid omoplata, but round ends before he has time to work on it.

Round 3.
Carter is bruised up but he is not ready to give up. Early into the round Salmi gains yet another take down. Salmi is in closed guard of Carter. Carter attempts attack from the bottom but Salmi uses this change to pass to half guard. Carter is actively attacking from the bottom while Salmi is trying to pass. Salmi progresses to side control.

Round 1.
First couple of minutes is spent trading kicks and punches. Valamaa scores a take down and lands directly into mount. Ponet turns he’s back and Valamaa locks in a tight rear naked choke. Ponet taps and its a wrap for the Fight Night 10.