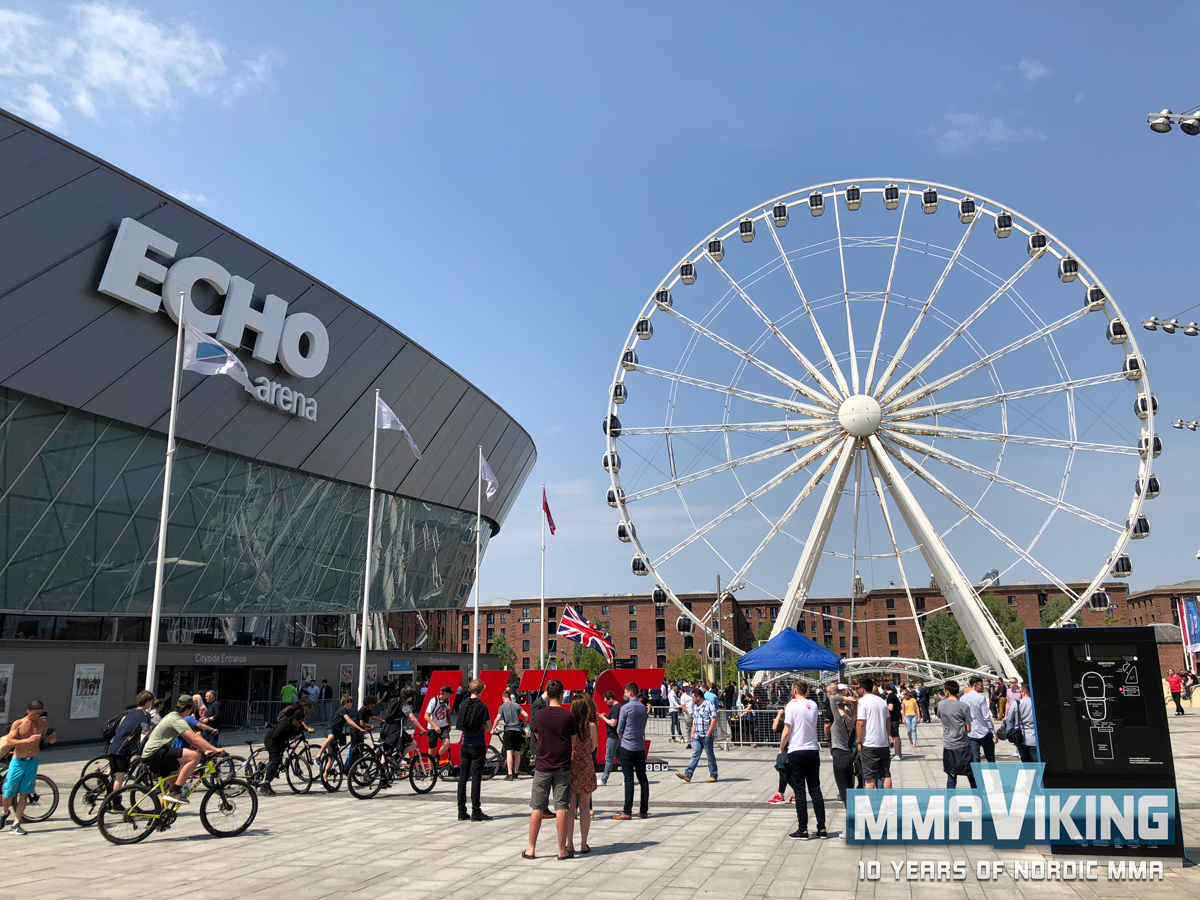 MMA Viking is cageside at the Echo Arena to cover the three Nordic fighters at the UFC’s first trip to Liverpool.  Sweden’s Lina Lansberg (7-3) will face American Gina Mazanywi (5-1) on the undercard, and Finland’s Makwan Amirkhani (13-3) will face American Jason Knight (20-4) and Dane Mads Burnell (9-2) will face Arnold Allen (12-1) on the main card.  Get your live results here.

Lina Lansberg Versus Gina Mazanywi
Round 1 – Lina catches a kick early, but does not take it down to the ground and moves to a tie-up.  The two exchange positions against the cage with Lina trying to dig for underhooks.  The two break apart with two minutes left and Lina lands a right kick to the head, the again the two end up in the clinch.  Good first round for Lina.
10-9 – Lansberg (MMA Viking Unofficial Score)
Round 2 – Lina gets taken down early in the second round, but is able to get to her feet.  Again to the clinch, and this is a grueling clinch battle.  The Redline fighter lands a few good knees in the clinch.  Another brief take-down for the American.  A few good elbows from the Elbow Queen, but Gina comes back with a few kicks.  Very close round.
10-9 -Mazanywi (MMA Viking Unofficial Score)

Round 3 –  Lansberg comes out with energy to start the third round.  Again the two spend their time in the clinch making it hard for any fighter to establish themselves as dominant.  The American landing a few shots from the outside, and it is now Lina that moves to the clinch with a minute left.  A solid knee to the body.
10-9 – Lansberg (MMA Viking Unofficial Score) 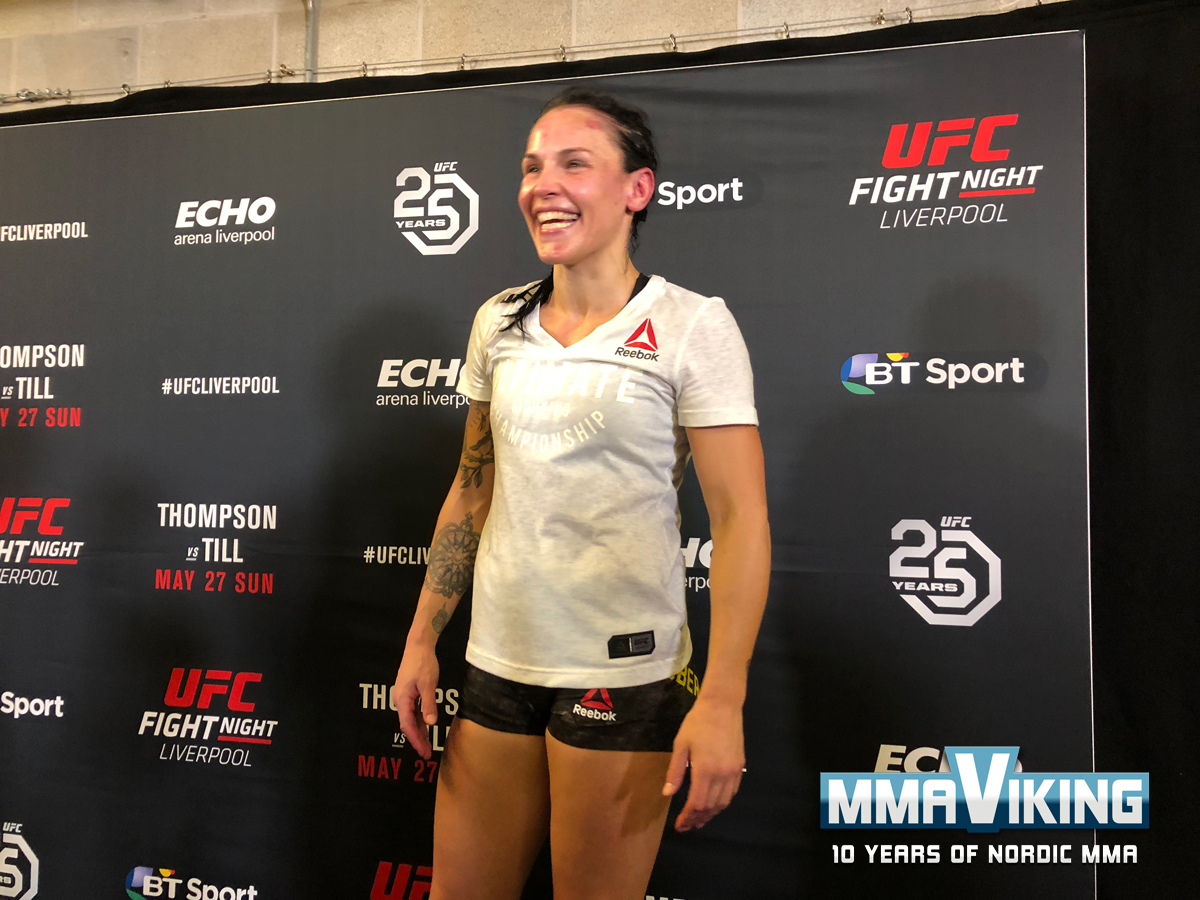 Makwan Amirkhani Versus Jason Knight
Round 1 –  Makwan avoids some high kicks early.  Both fighters in southpaw stances.  Good right right hand and now Makwan goes for flying knee, but it misses and Jason goes for a guillotine but it is not close.  Up to the feet it goes, where Makwan now takes it after making faces at the American.

A good stiff punch from Makwan, and it is a brawl.  Now Jason goes in for a combination.  Two minutes left and Makwan looks relaxed.  A looping punch misses from Mr. Finland as Knight tries to land a few kicks.

Makwan gets hit and rocked by a nasty upercut!  the AmJason goes for a rear-naked choke but can’t get it.  Back to the feet, and the American lands another big right.  Jason falls to his back for a triangle, but can’t get it and now an armbar.  It is madness, and the crowd is going wild.

Round 2 – Both fighters went to the wrong corner to end the last round.  Both fighters look to have regained their energy, and now both fighters striking from the outside.  Solid punch from Jason, then Makwan returns with one of his own.  Another big exchange, and Makwan dives in for a take-down for safety.  Two minutes left.  Good hammer fist on top.

Makwan gets a good body lock and finishes against the cage.

Round 3 – Makwan with the take-down, and Knight with some rubber guard.  Crafty, the American looking for a triangle.  Two minutes left and the ref calls them to tehir feet.  Big right and from Knight and Makwan look for a takedown and he gets it.  90 seconds left and the Turku fighter is on top.   A good punch on top, and Makwan ends up on top to finish the fight. 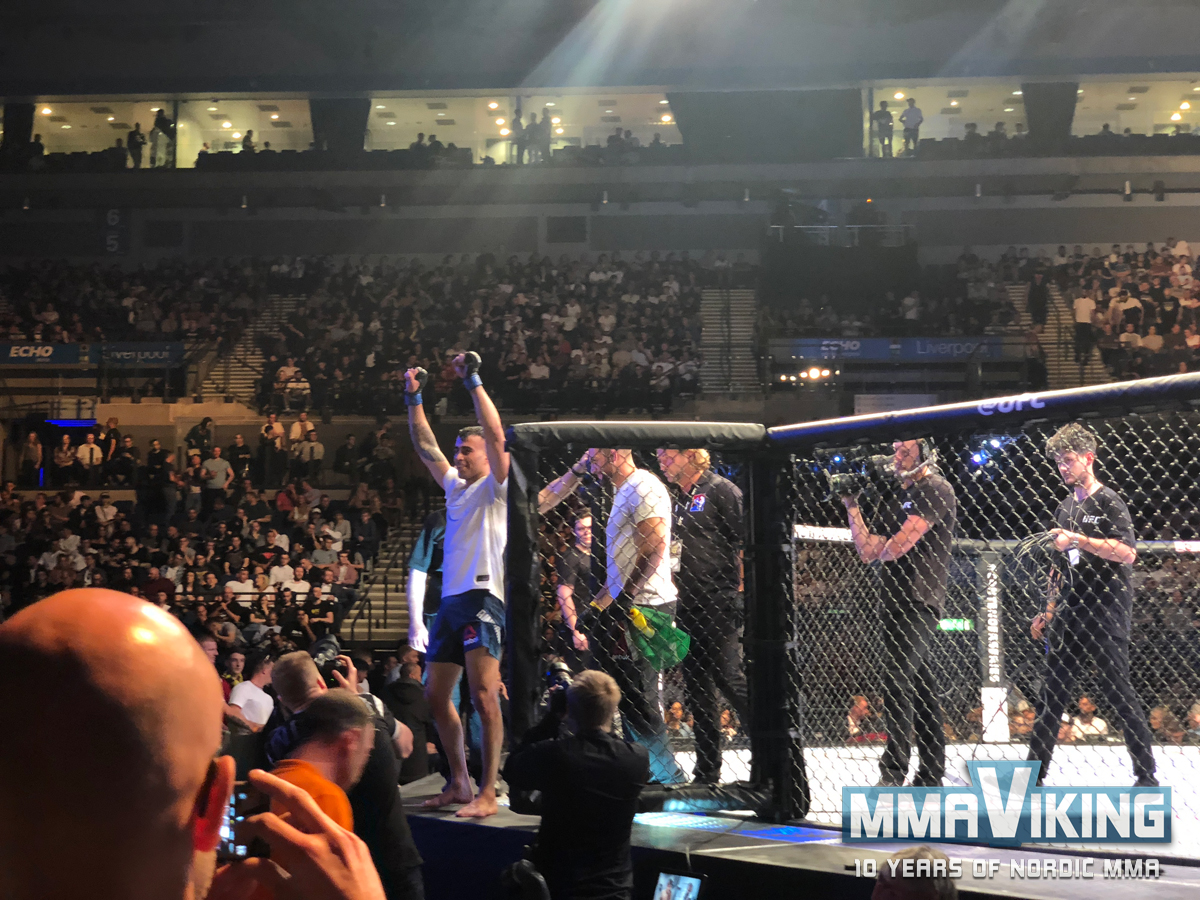 Mads Burnell Versus Arnold Allen
Round 1 – Burnell just comes out with the slickest boxing, coming in at all angles using head movement and landing left and right hands.

A nice inside kick from Mads, that is flowing here as Allen looks to land clean. 80 seconds left in the round, and Mads dives in a for a double leg and gets it. A perfectly executed round so far for the Dane.

20 seconds left and Allen gets up, only for Mads to get in on another take-down which he cannot finish at the bell.

Round 2 – Mads uses head movement to avoid two hard punches, and dives in for a double-leg take down.  Two minutes in and the black belt in BJJ is in total control as he pushes the UK fighters back against the cage.  Allen up, but Mads with a nice trip brings him back down.  Now the two are standing and Allen looks discouraged as Mads makes Allen miss.. and miss… and there is the take-down!  One minute left and the referee wants action.  Now full mount for Mads and he lands a nice shot before Allen regards half guard.

Round 3 – Burnell in on a take-down early and gets it.  Arnold has no answers for the Dane and is getting beat on the ground and on the feet.  Jut pure control, and Allen gets up only to get taken down.  Out of nowhere… Allen locks on a no arm guillotine.  It is tight and Mads rolls to his back to get out, but it only tightens!  A tap and it is all over.

OFFICIAL RESULT : Arnold wins by submission in 3rd round at the 2:41 mark.