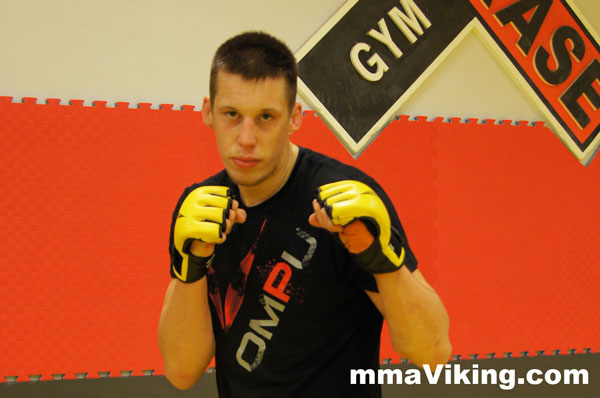 Getting buried in social media is one of the untold stories behind getting signed to the world’s biggest mixed-martial arts promotions. Swede Magnus Cedenblad received over 300 Facebook “friend” requests the day it was announced that he was signed to the UFC.

The quick change in popularity is something that Cedenblad is still developing a gameplan for. “I think I’ll hire an assistant to respond to all my messages” says Cedenblad jokingly, as he discussed the challenge of keeping up with the sea of Facebook and Twitter messages since inking a contract with the UFC last week. He is now scheduled to face Francis Carmont on the upcoming UFC in Sweden card on April 14.

Cedenblad has made his way to California, escaping Sweden’s dark winter for some focused training with many of the best fighters in the world in San Jose at the well established American Kickboxing Academy (AKA).

Waiting for practice to end, you’ll see such fighters as Josh Koscheck, Josh Thomson, Jon Fitch, and Daniel Cormier casually walking in the lobby.  It’s an all-star cast training during the day.  It’s 75 degrees (24 celsius), and the weather is a pleasant change for Cedenblad.  The Swede gladly exchanges his layers of clothing for just a t-shirt and shorts.

The Swede has been training at AKA for four straight days, jumping directly into training after arriving on the weekend. Tuesday seems to be the most dreaded day, even for the elite D1 wrestlers who want to avoid the 5 sessions of 15 minute intervals of grueling wrestling. Cedenblad is still recovering from Tuesday’s training that had Cedenblad puking –head wrestling coach Daniel Cormier was excited to enthusiastically push the newly signed UFC fighter.  Cedenblad is hoping that the wrestling toughness rubs off, as he tries to make the most of his 3 week visit.

Without a car, the Swede takes note of the quirky differences between Americans and Swedes. The local Californians can’t believe the he and Tim, who has also made the trip to San Jose to train, actually use their feet for transportation, instead of driving.  Today, Cedenblad however is in the home stretch for the week, finishing his Thursday workout he knows he has only one more day in the week before he survives the week and heads to San Francisco –he will rent a car– for some sightseeing.

The huge middleweight is a fan favorite in Sweden, and if he notches a few wins in the UFC, he’s the kind of guy that the UFC would get behind and promote.  Dig through forums, and you’ll see him referred to as the funniest guy in MMA.  If you follow his journeys documented by his blog, you’ll see exactly why.

Cedenblad makes a different impression than your typical fighter. If you met the Swede at a party, you’d guess the former salesman would be almost anything besides a “cage fighter”. His good spirited humor and enthusiasm for talking about all things non UFC and MMA, leaves you with the impression that he would more of the bartender type than a bouncer if he was employed at the local bar.

Let’s get to know the Pancrase Gym fighter, and how his life is changing now that he can add the words UFC to his resume :

Exclusive Video Interview at AKA

For some fight footage of the Swedish middleweight: