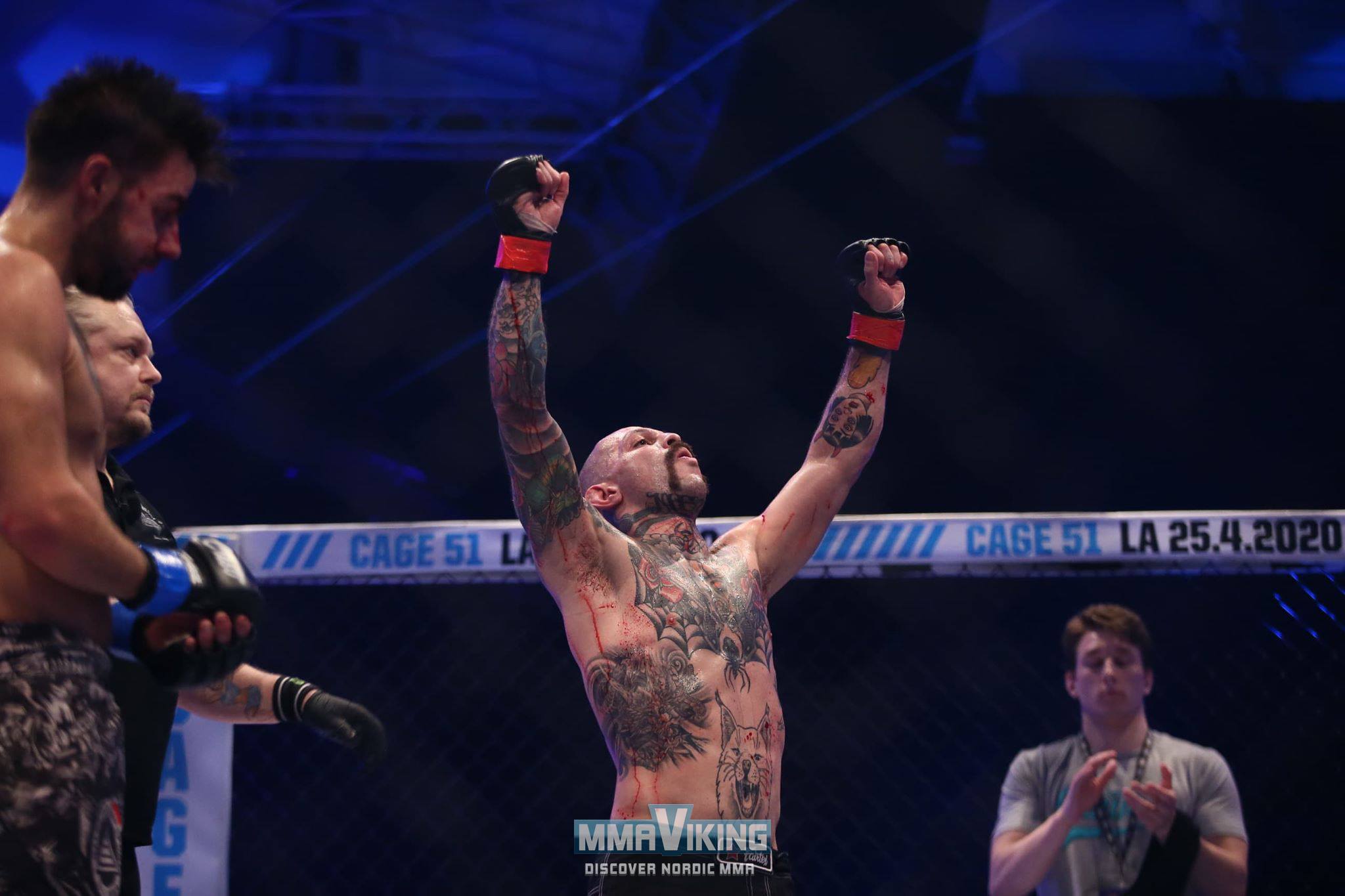 Finn Markus Rytöhonka (7-3-1) beat Robert Nyström (4-5) at Cage 50.  It was a close fight throughout the 15 minutes, but the GB Gym fighter came on strong in the third to get the unanimous decision victory in Helsinki.

Rytöhonka opens with a high kick, then proceeds to smash the Swede to the mat. Nyström threatens with a choke, and Rytöhonka rolls out. The Swede briefly gains the upper hand, but Rytöhonka is relentless in his defense, and winds up on top. His positional victory is short lived, however, as Nyström once more threatens with a choke, escaping to his feet. Rytöhonka takes him down once again, and finally settles into the top position to drop some ground and pound from half guard. Nyström struggles to his feet, eating big shots against the cage, but digs deep to take the Finn down. Nyström sinks in a deep choke, but Rytöhonka escapes, only to find himself fighting off a rear naked choke attempt. The round ends with the Swede controlling the Finn’s back, and threatening with the rear naked choke.

As the second stanza opens, Rytöhonka blazes forward with punches to set up a takedown, and secures it, slamming Nyström to the mat. Nyström struggles to his feet, and threatens with a guillotine choke, but releases it in order to improve position. Nyström holds Rytöhonka to the cage, but the Finn takes him down, and begins to apply elbows to the Swede’s forehead. Nyström wall walks to his feet, but Rytöhonka hits him with a big shot for his troubles, and grounds the Swedish fighter briefly, before finding himself reversed, with the Swede controlling his back, and looking for a choke. Rytöhonka scrambles, winding up in top position, but the Swede struggles to his feet, trips the Finn, takes his back, and ends the round raining down ground and pound before threatening with a rear naked choke once more. 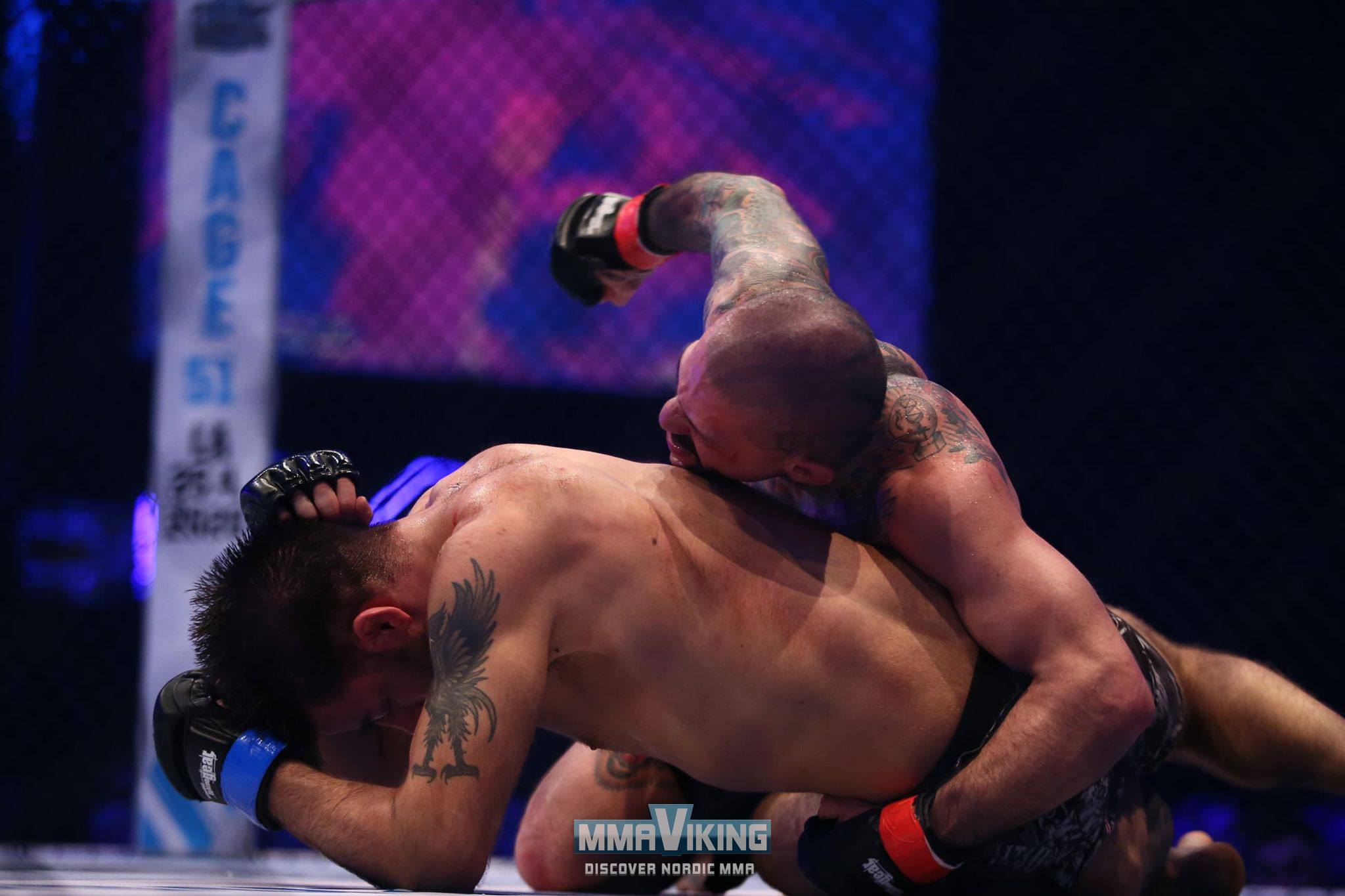 Nyström takes the center early, and attempts a kick, which is caught by Rytöhonka, who throws the Swede to the mat at the center of the cage. A hard right elbow lands for Rytöhonka. And another. The Swede begins to shrimp his way to the cage, wall walks, and reverses position, searching for a takedown of his own. Nyström’s hands are locked, he elevates the Finn, then drops him to the mat, but Rytöhonka springs back to his feet. He’s dragged down once more, and the Swede threatens a front choke, but Rytöhonka struggles to his feet, and lands a takedown of his own. Nyström bears a pained expresson as he struggles to his feet, and Rytöhonka, the relentless Finn, takes him down once more, and begins pouring on the ground and pound.

Rytöhonka attempts a rear naked choke after Nyström gives up his back, but Nyström struggles out, and regains the top position to finish the round.  The two embrace in respect and await the decision which goes to the Finn.