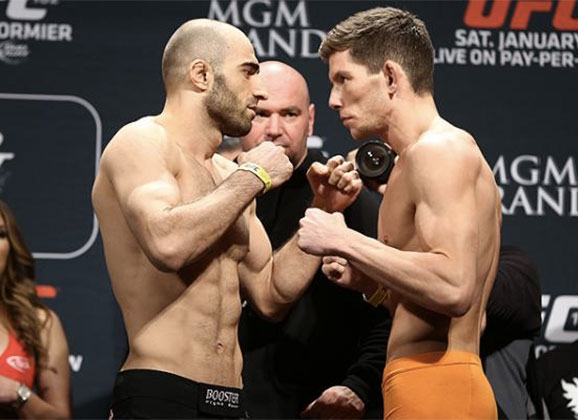 Swede Mats Nilsson (11-3-1) faces Dagestani Omari Akhmedov (13-2) at UFC 182 held at the MGM Grand Garden Arena.  Nilsson will make his second appearance in the Octagon, but will have his welterweight debut after dropping from middleweight.  MMAViking.com will post live play-by-play of the bout below.

Nilsson will have the second fight of the night, which will follow the opener bewteen Alexis Dufresne and Marion Reneau.  The Swede is the only Nordic fighter on the card, which is headlined by Jon Jones versus Daniel Cormier.

Check out an exclusive pre-fight interview with Nilsson here.

Nilsson is pumped coming into the venue. Blowing kisses to the crowd, with a Swedish flag in the background.

The Walkout Music for Nilsson

He gets a hug from Tue Trnka of Rumble Sports as he is the first to be called to the Octagon. Akhmedov looks cool as he calmly walks down to compete. Both fighters who once fought at middleweight look in tremendous shape.

Round 1
Nilsson comes out agressive first, but is taken down. Nilsson on his back just seconds into the bout, and huge right hands from Akhmedov on the downed Swede. Nilsson wraps up a leg and grabs a single leg, which he tries to work on the cage. Nilsson takes a hard, hard leg kick. Wide and powerful punches from the Russian.

Two minutes into the bout, and the pace is extremely fast. The two clinch, and a one two is blocked by Nilsson who covers his head with tight defense. Nilsson with a nice double leg take-down against the cage that finishes with amplitude. Working from the guard, but Akhmedov gets out and is up. 90 seconds left, and an explosive double leg take-down from the Russian… but Nilsson is able to get to his feet and is up with a minute left in the round.

The pressure applied by Nilsson looks to be wearing out Akhmedov. And a take-down from Nilsson at the end of the round, and a good right hand to finish the round from Nilsson. Blood is coming from the nose of Nilsson.

MMAViking.com Score : Akhmedov 10-9 – Close first round, but with the damage on the feet, the Russian has the slight advantage.

Round 2
Nilsson is mixing it up with jabs and head movement. Good left kick to the body and a great right hand for Nilsson. The two are going back and forth, and again the pace is tremendous and both are exchanging punches. Akhmedov with a double leg that finishes the take-down. The Russian looking for elbows, but Nilsson covering up well. Feet are on the hips, and an armbar attempt… but nothing is there. Two and a half minutes in, and Nilsson is back to his feet. You can feel Akhmedov slowing as he lunges on punches, but he dives again for a double-leg takedown and gets it. This could lock up the round. Only 90 seconds left, but Nilsson lands good reverse elbows to the face. Akhmedov on top landing punches, but the Swede doesn’t like it , and back to the feet. But for the third time in the round it is a takedown with the Helsingborg is on his back.

Round 3
Nilsson pressing the action, but nothing has landed for either fighter through the first minute. The Rumble sports fighter tries for a take-down, but not good penetration and Akhmedov sprawls. Still not much landing, with the overhand right and left combination coming slower and slower.

Three minutes left and first take-down successfully defended by Nilsson. Half way through the last round and Nilsson gets a take-down against the cage. Nilsson in half guard, but not really threatening with a submission. Just over a minute left and both are now on the feet as the Russian puts his back to the cage and makes his way up. Nilsson now defending a take-down against the cage, and a tight kimura for Mats, but he can’t get it. 30 seconds left and a sweet Judo throw…. and now a guillotine for Nilsson, and it is tight! Now a d’arce!!! Time run outs.

Nilsson bows as he leaves the cage.

Gave it all I had. He won. Fair n square. However I feel like a winner given all the support I've had the privilege to enjoy. Love y'all!