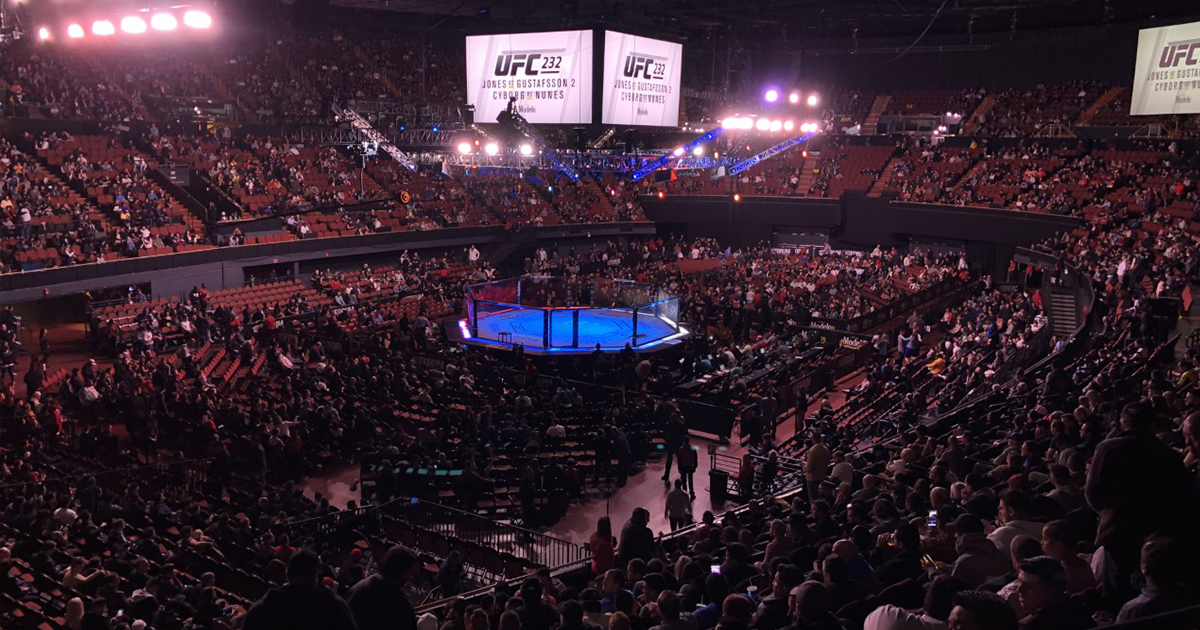 MMAViking is reporting live from the sold out Forum in Inglewood, Los Angeles. Ilir Latifi takes on Corey Anderson in the second bout of the main card. And of course the main event that has been 5 years in the making, the long awaited rematch between Alexander “The Mauler” Gustafsson and Jon “Bones” Jones closes the evening. See the play-by-play from the Swedish bouts below.

Round 1 – The two fighters take to the cage, and Anderson establishes the center of the octagon early. The two clash early, and Latifi lands a thudding leg kick, nearly taking the leg from under the American. Another hard leg kick, and Anderson is stumbling. Anderson attempts a jumping knee, but Latifi grabs his leg and tries for a takedown against the cage. Anderson slips, briefly, but regains his feet. Anderson with a kick up the middle, as he takes the center. The American charges at Latifi, and Latifi cracks him with a left hand that wobbles him. A headkick glances off Latifi, and as Anderson attempts to kick, Latifi counters with a left hand. Latifi pressures forward, but is reversed when the two meet the cage, and Anderson circles out, regaining the center of the cage. Anderson attempts a jumping knee, and uses it to pressure the Swede to the cage. Latifi breaks, and swings for a hard uppercut, but falls just short.

Round 2 – As the second round begins, Anderson once more establishes himself in the center of the Octagon. A hard body kick lands first on Latifi’s right side, then another on his left. Anderson lands a left hook. A short right hand lands for Latifi, and Anderson pressures him toward the cage, but is reversed. Latifi looks for a single leg, but Anderson defends and lands a knee to the body on the break, before looking for a takedown of his own, which Latifi denies, circling out. Anderson rips a right hand to the body, followed by a kick up top, and Latifi looks to be slowing down. Latifi tries to close the distance, but Anderson shrugs it off. Latifi appears to be backing off before lunging forward with big shots, that Anderson avoids. A solid combination lands for Anderson, including a hard right hook. Anderson pressures Latifi to the cage, and the two struggle for position before trading hooks. Latifi clinches to end the round, but Anderson is able to break free and score with a left hook before the bell.

Round 3 – Anderson opens the round with a spinning kick, to no clear avail, but is able to once more secure the center of the Octagon with Latifi on the outside. Anderson lands a kick to the body. Anderson attempts to close the distance, and Latifi hits him with a combination. Anderson backs off, and as he attempts to re-engage, Latifi hits him with two more hard shots. Latifi lunges forward and nearly slips, but regains his composure. Anderson pushes him to the fence, but Latifi is able to create distance, and land a hook. Latifi with a kick that lands just behind the ear on Anderson, but Anderson pressures Latifi against the cage, and hits him with a hard shot just after the two break. Latifi gestures Anderson on, but the buzzer sounds and the match ends.

All three judges score this bout 29-28, for the winner by unanimous decision, Corey Anderson.

Round 1 – The two fighters touch gloves, return to their corners, and emerge as combatants. Jones clinches early, and attempts to wrench the shoulder of Gustafsson. Jones clinches again, and does more of the same before throwing knees to the stomach of the Swede, one of which goes low. Jones takes the center, and kicks the leg of Gustafsson hard. Gustafsson and Jones exchange leg kicks, and Jones attempts to work the legs and body of the Swede, who throws a left hook of his own. Jones lands a hard left hand, followed by a front kick to the body. A leg kick lands for Jones, and the two clinch briefly before breaking. Jones shoots halfheartedly, then goes upstairs with a kick. Jones attempts a takedown with more gusto, but is denied by the Swede. Gustafsson has now taken the center of the cage, and uncorks a flurry of punches on the American. A right hand over the top appears to land for the Swede, who has his leg kicked by Jones in return. Jones ends the round with a kick to the body as Gustafsson switches stances.

Round 2 – The second stanza opens, and the Swede finds himself at the center of the cage. Jones lands a kick up the middle, then a left hand to the solar plexus of the Swede. Gustafsson eats a kick to the body. Jones shoots, and Gustafsson attempts a guillotine choke to no avail before they break. A kick lands for Jones, followed by a right hand for the Swede, but Jones creates distance, and lands a hard kick to the body of the Swede. An eye poke stops the action, and the doctor looks at Jon Jones’ eye as the referee warns Gustafsson. Gustafsson lands a right hand as the two re-engage, and Jones kicks to the calf of the Swede, who attempts a spinning back elbow but comes up short. Gustafsson applies pressure to keep Jones on the outside, but is unable to cut the cage off on the taller fighter. Jones hits Gustafsson with a hard leg kick, which visibly draws a reaction from the Swede. Another leg kick for Jones. Jones lands a glancing uppercut. Jones steps in with an elbow, ties Gustafsson up, then throws another elbow on the exit before finishing the round with a turning side kick to the body of the Swede.

Round 3 – The round begins, and Gustafsson is showing visible damage on his left shin. Jones leaps in for a takedown and secures it, moving to half guard and hitting Gustafsson with an elbow along the way. Gustafsson attempts to regain his feet, but is bowled over by Jones, who steps into side control and then pushes forward to take the back of the Swede, where he rains down shots until the referee calls the fight.

Jon Jones defeats Alexander Gustafsson via TKO at 2:02 of round 3.