Today, organizers of The Zone FC announced that Eddy Bengtsson, Gladius MMA with a record of 4-2-0, will fight at The Zone FC – Demolition the 6th of May.  Read the press release below: 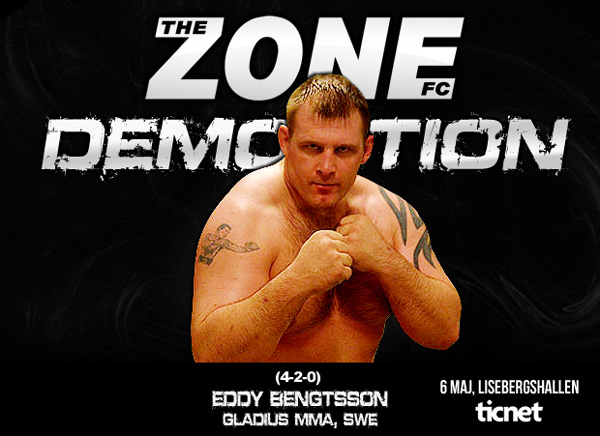 Eddy Bengtsson, the popular heavy weight fighter from Gladius MMA, Gothenburg will fight in front of his homecrowd once again. This will be his fifth performance in The Zone cage. In the previous fights he has been victorious, all wins has come by submission or TKO in the first round.

Bengtsson has since the recent fight lost a lot of weight and is walking around at 120 kg, which makes him even faster and it also makes it easier to find him opponents.

Bengtsson is scheduled to fight at Cage Warriors 45 in London 18th of February. Bengtsson was supposed to fight Jay Mortimer, but he is injured and the organizor is working hard to find a replacement fighter. A new opponent should be announced in a day or two for Cage Warriors 45.

Bengtsson really loves to fight in front of his home crowd. He is also i big fan of the local football club IFK Göteborg. Most likely some football players will be in Lisebergshallen to cheer for one of their biggest fans the 6th of May.

Markov vs Bengtsson at The Zone FC 5 – Bushido