YourMMA.tv today is reporting that Jörgen Kruth is set to make his debut in the Octagon against Fabio Maldonado. Originally, the Swede was set to be re-booked for a matchup with Cyril Diabaté at the UFC Nottingham event which takes place on on September 29. 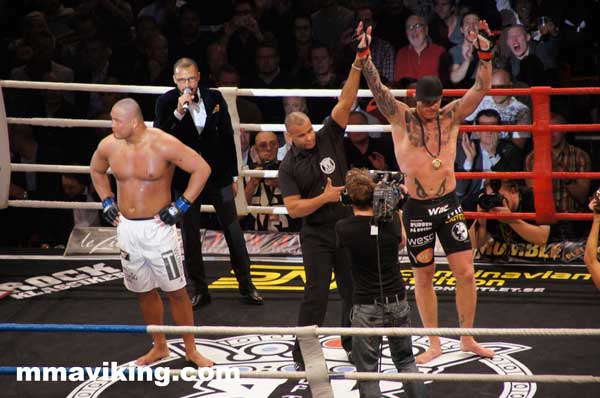 After his win at Sweden’s Rumble of the King  (pictured above) last year, Kruth was signed to the UFC and was set to take on Diabaté in Stockholm Sweden on April 14, but was forced to withdraw due to a rib injury.

Kruth will also be making his debut as a light heavyweight dropping from heavyweight.  He will face Brazilian Fabio Maldanado, who is 18-5 and has 1 victory and two losses in the Octagon, including a Fight of the Night loss against Kyle Kingbury at the Ultimate Fighter 13 Finale.  The card is headlined by heavyweights Stipe Milocic versus Stefan Struve, and co-headlined by local Dan Hardy versus Amir Sadollah.

The YourMMA.tv report can be seen here.

Announcement : Ticket Information for the September 29th UFC in Nottingham

Report : Kruth Off of UFC in Sweden Card