Reza “Mad Dog” Madadi could be a candidate for the UFC with a win at Superior Challenge on October 29th in Stockholm Sweden.  The event, being touted as “The Greatest MMA Event of Scandinavia” is getting worldwide press, for such big names including Joachim “Hellboy” Hansen and Daniel Acacio, and former UFC fighters Thales Leites and Sweden’s own David Bielkheden.  A win at such a high profile event against David Baron, also a UFC veteran, could earn Mad Dog the call to a UFC card.  He is on a four fight win streak, and looking to make it 5 wins with a Superior Challenge victory. 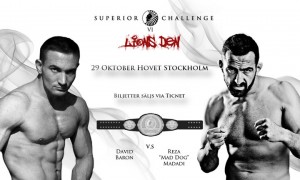 One criteria it seems that UFC matchmaker Joe Silva looks for in signing a fighter is a win over a former UFC fighter.  With his previous win over TUF badboy, and UFC alumn,  Junie Allen Browning at SC 5 this May, this will be two consecutive wins over former UFC fighters.  Could this be enough to catch the eye of the UFC?  We sure hope so!  Good luck to Mad Dog in his upcoming fight.