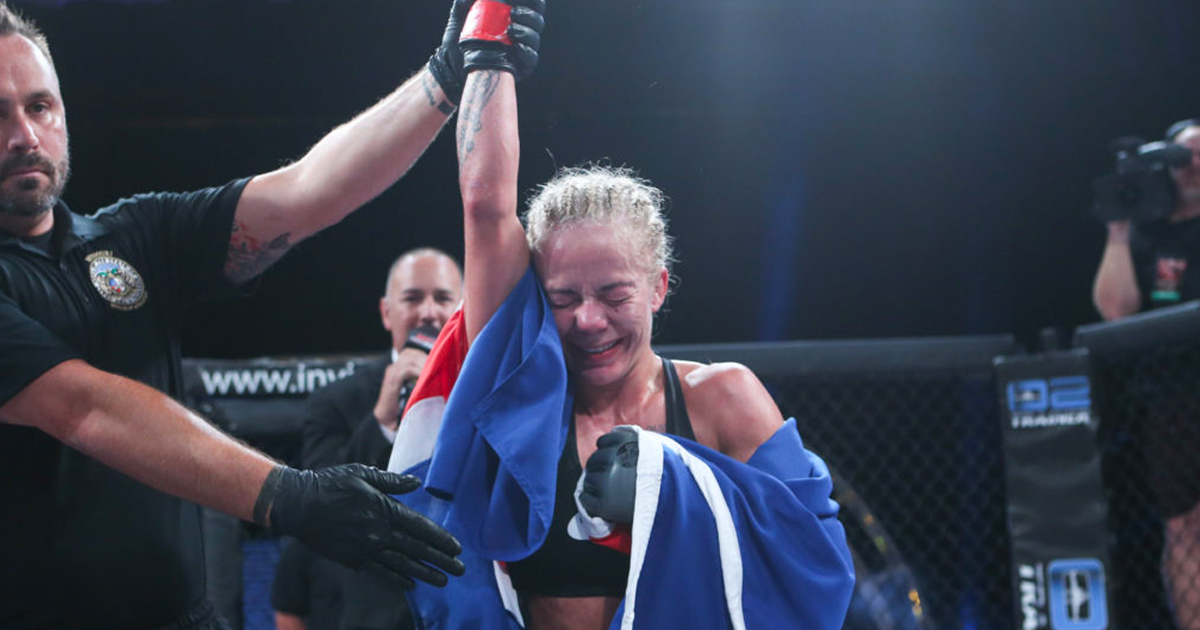 Iceland’s Sunna Davidsdottir (3-0) will make her long awaited return to the cage at Invicta FC’s new Phoenix Rising Series, a one-night, eight-woman strawweight tournament that will now crown a new champion. “I suspected that something like this would happen as Virna Jandiroba moved to the UFC and the strawweight belt was vacant, that does not change the fact that my heart skipped a beat when it was announced that the winner of Phoenix Rising will become the Strawweight Champion.” says the Mjölnir fighter to MMA Viking ahead of Friday’s first-round matchup against UFC vet Kailin Curran (4-6).

“When I heard about the Phoenix Rising tournament I got super excited. The tournament format is so entertaining and the fact that we will have to pack everything we have into 1 round fights is something I think can bring out the best in me. Some bombs will be thrown that night. I can guarantee that.”

The 2016 Nordic Female Fighter of the Year has spent time away from competition due to injuries, but now more ready for return. “I had been looking to get a fight booked since the year started. I was where it all started for me, Tiger Muay Thai in Phuket, over Christmas and New Years and that really lit the fire inside me again. Once I returned home I wanted to go straight into camp even though a fight was yet to be booked. I just wanted to be ready for anything that could come up because I felt it clearly that I was 100% ready to go again.”

The buzz around Sunna started in 2015, where she won 4 fights as an amateur including a IMMAF European Open championship gold and a IBJJF European Champion.

Her training since her last bout has taken her around the world. “There was a great group of SBG girls (and boys) that John Kavanagh brought over to Mjolnir in February and as I don’t really have any girls in Iceland to train with it was really good to train with them and feel how everything I have added to my game clicked on the mats and in the cage.”

“I have been staying and training in Vegas with JoJo Calderwood and her man and coach John Wood at Syndicate MMA for a few weeks now. The setup at their club and also in the UFC Performance institute is just too awesome. Alexa Conners joined us and then there is plenty of great girls here like Roxanne Modaferi for example. This is the perfect environment for me to finish my camp in and I’m so grateful to them for having me over.”

“I feel incredibly good. I’m in the best shape of my life and in a really good mood too. I have been away from the cage for way too long and I look so much forward to return.”

It has been a long and unpaved road for Sunna that as a mother and the first pro MMA fighter from Iceland could claim an unlikely status of world championship. “This has been my dream since I was training in Thailand in 2013. It was there that I realised that I could really have a shot at becoming the best in the world if I just go after it and put it all on the line. I have done that. I have endured some horrible times to get to where I am today and in my mind there is no way that I’m leaving the Kansas City Memorial Hall without this belt strapped around my waist.”

“Kailin Curran is a really good fight. She has some very good fights on her resumé and she has been unlucky with some close losses that on another day would have been wins. So I am super happy to fight her but to be fair it really does not matter at all to me which one of these 7 girls that are with me in the tournament I will be facing first. I need to be able to win every one of them to deserve that title I believe that I can. I believe in my ability and I am packed with positive energy and hunger and I truly believe that Friday May 3rd will be a bright and beautiful day.”