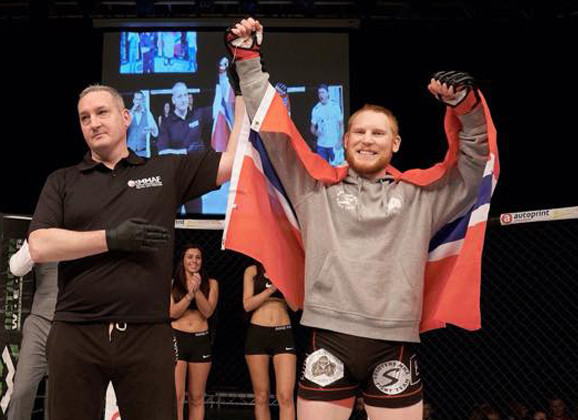 Thomas Robertsen (3-0) only needed 8 seconds in his previous bout to KO his opponent Harry Selby at the BCMMA 13, something that must have left an impression on the British promotion. The Norwegian now returns to the organization for another fight on February 20th and this time he will fight for the welterwweight interim title against the Iranian Mehrdad Janzemini (2-1) who has never fought longer then 1 minute in each of his 3 professional bouts.

“He is a tough guy and it will be a high action fight, I think we both will come out swinging. I train hard and we just have to see who will be the best man that night” says Robertsen to mmaViking.com.

The still undefeated Norwegian knows what he will be facing in the cage but doesn’t let that bother him,

“I’m fighting a well rounded opponent with heel-hooks as his favorite move. His record is 2-1 but all his bouts has ended in 30 seconds of the first round, he is very dangerous and I have much respect for him. I train hard and I feel strong and ready, it will be a fight for the BCMMA interim welterweight title. I will give my all in this fight and try my best to be crowned the new interim welterweight champion.”