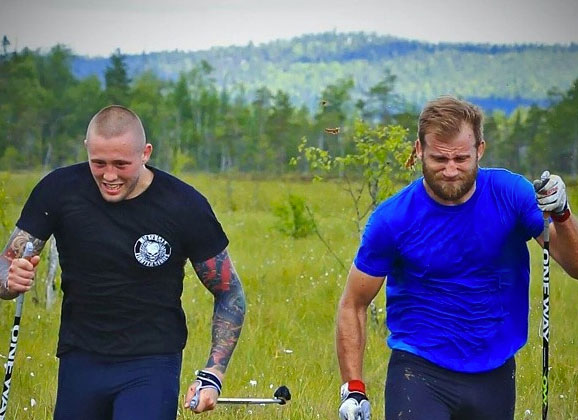 Swedes Tor Troéng and Andreas Ståhl  are getting ready for upcoming UFC bouts with a world champion. However, it’s not another combat sports athlete that is helping them… it is retired cross country skier Per Elofsson.

The fighters and skiers are from Umeå, in northern Sweden. Troeng and Elofsson first decided to train together when they met to share their methods with each other. “In his sport he needs to be strong in both legs and upper body. As we talked, I realized that he was not training upper body with more than with weight training. Myrlöpning (swamp running) is taking in the whole body and I think that will help much” says Elofsson to SVT.se.

Troeng had been recovering from shoulder injury, but the Hammer will return after a 10 month layoff to face American Trevor Smith on July 19th.

“He’s bringing a new dimension to our training and new influences. This will be very exciting” says the Renyi Fighter about his training that also involves fellow UFC fighting teammate Andreas Stahl.

The UFC fighter and the Bronze medalist skier hope their partnership will help each other take their strength and cardio to the next level.

Stahl will now face Gilbert Burns on the UFC on FOX 12 card on July 26 at SAP Center in San Jose, California.

Photos from fighter instagram’s, and photos by Baland Reza.