Turku Fight promotion is back in business after a break that lasted for one and half years. The comeback show, labeled “Turku vs the World”, is smaller scale than previous shows but the fight card looks to have potential to deliver excitement and entertainment for the local crowd. The battles will be fought this Saturday 15th of September at the Samppalinna Hall in Turku, Finland.

In the co-main event the promoter himself Jerry “AD/HD” Kvarnström (10-2) gets a stiff challenge from the Frenchman Johnny Frachey (15-9). Kvarnström is the better wrestler of the two but Frachey is an experienced allrounder who can finish the fight on the feet and on the ground.

The main event of the night is a open weight freakshow superfight between FinnFighters Gym’s Pekka Kytösaho and notable Finnish bodybuilder Uolevi “Unski” Ojala. Kytösaho has competed in amateur MMA and won bronze in combat grappling at FILA European Championships this year. Kytösaho walks around at 89 kilos and is 180 cm tall. Ojala’s combat sports experience is unknown to us but at 130 kilos and 191 cm this beast is a force to reckoned with in the ring. The fight will be fought under K-1 rules and it will consist of three five minute rounds. 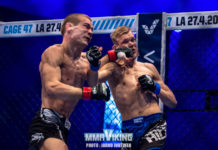