Sweden’s Reza Madadi (12-2) steps into enemy territory to face Brazilian Cristiano Marcello (12-4) in Rio at UFC 153. Here is information on how to watch the bout live, and live results and play-by-play. “Mad Dog” is the only Nordic fighter on tonight’s card headlined by Bonnar versus Silva.

How to Watch the Fights Live — The Fight is Over

It appears the UFC is also showing on YouTube without any login at:
http://www.youtube.com/user/UFC?v=-m9z79ma0nU –>> You cannot watch. The fight is over, read below for results.

Ilir Latifi walks in with Reza Madadi. “Mad Dog” looks confident as he walks down to the Octagon sporting Bad Boy brand on his outfit. “Till I Collapse” by Eminem is in the background. Of course, he is booed loudly as he enters.

Marcello on the other hand gets huge cheers as he enters, and quickly makes his way down to Stitch before stepping into the Octagon. The two almost go face-to-face as Madadi greets his opponent. Madadi is going crazy, embracing the role of bad guy. Again, the two meet in the center of the Octagon and touch heads. 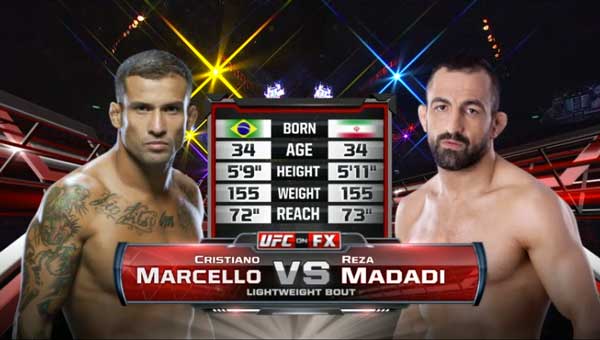 Round 1
Madadi comes out, and Marcello tries an overhand right and then a right kick. The crowd cheers with every Brazilian strike. Reza is keeping his defense tight, waiting for his spot to strike. A couple left straights from Madadi, who looks confortable stalking his opponent.

One and half minutes down, and no one has landed anything significant. Madadi seems the more confident fighter, waving on his opponent for more. A super man punch from Madadi looks to land. Half way through the round, Madadi lands a few more punches. Marcello takes the center of the Octagon. Overhand punches from Madadi, as he chases the ground specialist. Marcello looks to have a litte blood coming from his nose. The Brazilian is mising in a right kick, and Madadi likes to keep the fight standing, as he doesn’t look for a takedown.

One minute left in the round. Madadi takes it to the ground with 40 seconds left. Madadi says “Get up bitch”, and the referee says “watch the offensive language”.

Round 2
Good left hands from Madadi to start the second. One minute in the round, and Madadi seems to be stalking now. Solid right hand from Madadi. Marcello tries a left kick, and the two are exchanging. When Madadi lands, there is no applause. Madadi with a big upper cut.

The Swede is cut on the left eye, and thinks about taking the fight to the ground, but follows the game plan and keeps it standing. The two clinch half way in teh round, and Madadi wipes blood away. The two try to land haymakers, and Madadi is damaging more, but no huge blows land. Big right from Madadi , and another left and righ, and he has Marcello hurt bad. One minute left, and Madadi takes a few of his own.

Madadi slams Marcello with one minute left, and lands some small hammer fists. The fight is stood up after 25 seconds on the ground. Marcello flurries, and the crowd applauds, but not enough for a dominant round from Madadi.

Round 3
Big right hand by Madadi 20 seconds into the round. Madadi seems to be the fresher of the two, and moves forward as the Brazilian tries to counter-strike. Madadi with a take-down one minute into the bout. “Keep yourself busy” says the referee immediately, and the fight goes back to the feet as Madadi elects to keep it there.

Two minutes down, and three minutes left in the fight. The left jab seems to be the difference here, as Madadi uses it to land first. Marcello’s face looks beaten, and he tries a reverse high-kick, and Madadi gestures to the crowd with the miss. A big right rom Madadi that again chases the Brazilian around the cage. Marcello looks up a tthe click , and sees one and a half minutes left and charges as Madadi and lands some punches. Madadi is moving back, but the two elect to stand in the middle of the Octagon. 35 seconds left and Marcello is throwing some jabs and kicks that miss.

The two embrace, as Madadi is the first to gesture.

Steven Marrocco ‏@MMAjunkieSteven
I think these two beat the grudge out of each other. I have it 29-28 for Madadi. #UFC153

Hywel Teague ‏@hywelteague
Even the Brazilian reporter from Curitiba (same city as Marcello) sat next to me gave that to Madadi. Very surprising decision

John Morgan ‏@MMAjunkieJohn
I personally had it for Madadi, 29-28, with him taking R1 and R2. Great start to night for fighters, maybe not so much for judges.

Luca Fury ‏@GamblingFury
Wow, first fight in, and there was already a hometown decision. 30-27 Marcello? GET THE #@%& OUTTA HERE!

Jordan Breen ‏@jordanbreen
Hahaha. What a shitty decision. Ossss. Or whatever.

Ben Fowlkes ‏@benfowlkesMMA
Reza Madadi just got robbed in Rio. Hope he remembered to stash his traveler’s checks in his underwear.

Mauro Ranallo ‏@mauroranallo
In front of his hometown crowd,Cristiano Marcello won his first UFC fight via split decision over Reza Madadi.30-27 score was off.