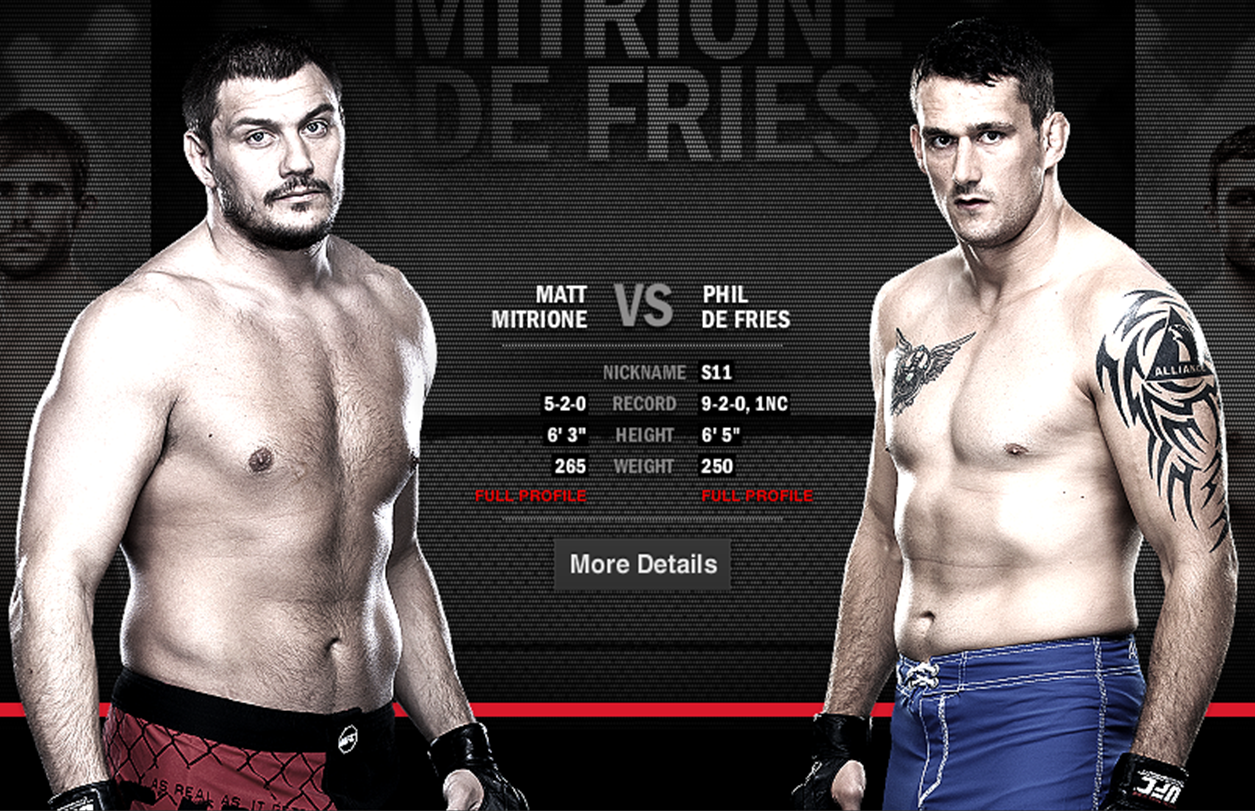 Matt “Meathead” Mitrione (5-2, 5-2 UFC): Like the half of the guys on this card also Mitrione is a former Ultimate Fighter competitor. Mitrione took part in the TUF season 10 of the reality show. The former NHL player was really green in MMA during the show and basically just got by being a really big athletic dude. In the semi-finals he ended up losing James McSweeney by guillotine choke. However Mitrione’s good physical attributes and natural athleticism allowed him to improve rapidly after the show. Mitrione, who fought his first ever professional fight in the UFC, opened his career with the promotion with five straight wins in the Octagon. The level of competition was obviously not the best there is but still Mitrione showed that he has good power in his strikes and scored four knockouts in those five fights. After the winning streak it was time to step up the game and match Mitrione up with the official gatekeeper of the UFC heavyweight division: Cheick Kongo. Mitrione’s mediocre wrestling was his downfall against the Frenchman who dominated him with takedowns and strikes on the ground. Mitrione’s second loss came in his last fight where he met Roy Nelson. After a good start Mitrione begun to slow down and was caught with heavy punches late in the first round, losing by TKO. The Blackzillian representatives best weapon is his quicknest for a guy of his size and strong kicks on the feet. While his grappling isn’t anything to write home about, it has been improving all the time and most of his previous opponents have had a hard time keeping him on the ground.

Phil DeFries (9-2, 2-2 UFC): Englishman DeFries is facing a tough challenge in Mitrione and is most likely fighting for his job in the UFC. DeFries, who came in to the UFC as an undefeated prospect with a clean 8-0 record with seven submission wins, has gone 1-2 in his last three with the lone win over his countrymen Oli Thompson. Before the Thompson bout, DeFries was knocked out by the Dutch giant Stefan Struve. In his last fight DeFries was finished with strikes in two minutes in the hands of Todd Duffee. DeFries is a tough guy who hails from an extensive background in BJJ. He is obviously dangerous on the ground but his average physique and wrestling make it hard for him to get the fight to the ground against higher level heavyweights.

Match up: This is pretty much a classic striker versus grappler match up. Mitrione will have a definite advantage of the feet while DeFries should hold the advantage on the ground. While DeFries is a big boy at 193 cm and 110 kilos, he will still be smaller than Mitrione who is the same height but walks around at 118 kilos.

Summary: Mitrione’s speed and size advantage along with his improving takedown defense should be enough from him to keep the fight on the feet. If the fight stays standing up, Mitrione quickness and strong strikes will be superior to DeFries’ who will try his hardest to get the fight to the ground at any cost.