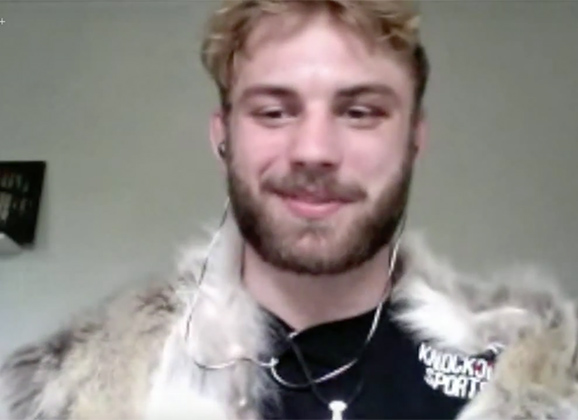 MMAViking.com has a chat with undefeated Søren Bak (6-0) on its popular “Fika Time” program sponsored by warriorcoffee.com (use ‘viking’ code for 15% off). Fresh off his fight of the year candidate with Finn Aleksi Nurminen, the “True Viking” in his viking wardrobe talks about return back to school immediately after last weekend’s fight.

“I’m studying finance with a focus on pension” says Bak that give some insight into his personal life as he talks about fight life between his schooling and working at McDonald’s on the weekend.

“A lot of the guys at the gym did it, and my girlfriend did it.” says Bak that put money on the bout to take advantage of the 2-1 underdog status. Perhaps the odds should have been that low after the Dane talks about the cut he suffered 3 weeks before the bout. “I stood up too quick, and then I fell on a big bottle in the corner. More than 8 cm long and 1.5 cm wide in the center. 13 stitches.”

Bak also walks us through the bout round-by-round. “He isn’t that bad of a guy that he seems on the Internet.” says Bak that bonded with Nurminen after the bout. “I believe when two guys fight like that for 15 minutes you gain each others respect.”