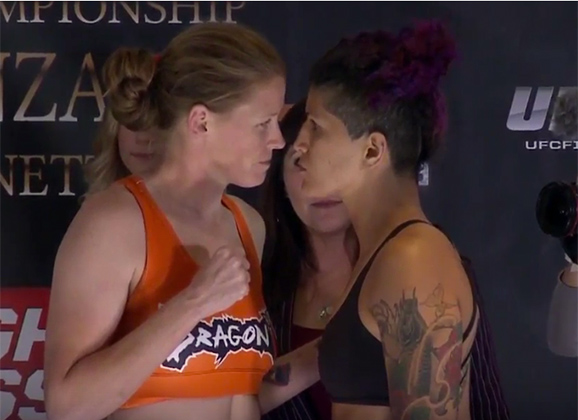 Pannie Kianzad missed weight for her bantamweight title bout Friday in Kansas, as the undefeated fighter hit the scales at 136.7 pounds, 1.7 lbs over the 135 lbs title limit. Shortly after, title holder Tonya Evinger also was over the limit at 135.2 lbs, putting both fighters over the limit sending the bout to a non-title status. It was announced however that the headliner fight would proceed as a 5 round bout.

The co-main event with Finn Katja Kankaanpaa did not go as planned either, as DeAnna Bennett had trouble making the strawweight mark. The unbeaten American hit the scales at 117.4 pounds, 1.4 lbs over the non-title limit of 116 lbs.

See the bizarre weigh-ins below.