Swede Jack Hermansson’s bout against Daniel Vizcaya will took place on the main card of tonight’s Bellator 84 set to take place in Indiana.   The Norwegian trained fighter looks for a win in his Bellator debut.

The main card starts at 2:00 Olso/Stockholm/Copenhagen and 3:00 Helsinki. 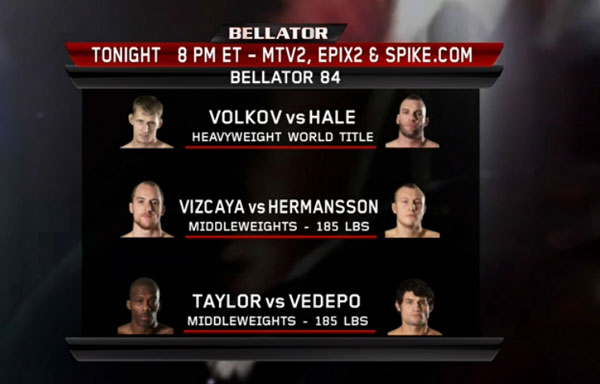 Round 1 starts, and the two are on the feet trying to establish their range. After a minute the two tie-up in a clinch, and the first chance to see how good the American wrestler compares to the Nordic greco grappler. The both stand in traditional stances.

Hermansson shows his greco skills early with a take-down one minute into the bout. The Joker ties up the American on the cage as he gets to his feet and lands a nice kick, and the first tow minutes are controlled by the Swede training in Norway. No real significant damage, but in control.

Vizcaya is out and scores a takedown half way through the round, and the American putting in time on top. No real damage, but putting in some time on top, and looking for some strikes. The first half of the round was all Hermansson’s, while the second was for Vizcaya. Close round, but unfortunately with Vizcaya on top at the end, judges likely scoring for the local fighter.

Round 2 begins with another takedown for Vizcaya. The college wrestler takes Hermansson down and is able to stay on top, trying some ground and pound. The American is holding on tight, and in control of this round so far. Hermansson tries to get up, but with over a minute left is taking knees. Again, the wrestling is making the difference, as Vizcaya takes the fight back to the ground with a double-leg. Hermansson going for a kimura, but Vizcaya is out of the hold.  Now a nice a sweep for the Frontline fighter, and he is on top. 30 seconds left now. Big punch by Hermansson, and he is pounding away as Vizcaya desperately goes for a takedown.  Good damage late from the Joker.

Round 3 and it looks like the American is tired. Hermansson moving forward, and looking to strike. Hermansson with some punches. The two tie-up, and Hermansson with a nice foot sweep and takes down the American. Hermansson takes back, and now knees the fighter. A suplex from Hermansson, and he’s showing who has wrestling skills, dominating in the last round.

The Swede is on top, and lands a nice right hand standing above Vizcaya. With the first two rounds going to Vizcaya most likely it looks like he is coasting to a victory, but the Joker goes for the kill. The two are on the feet, and Hermansson is in control with his take-down defense, landing elbows and more elbows on his opponent barely holding on as he tries to reach for Hermansson’s legs. Strong round for the Swede.

The judges read their scorecards, and the first one goes for Hermansson 29-28, but the final two cards go to Vizcaya 29-28. Split decision for Vizcaya on the judges cards.

Hermansson loses his Bellator debut, and loses his undefeated status now going to 5 wins and 1 loss.  Vizcaya improves to 7 wins and 2 losses with the close win.