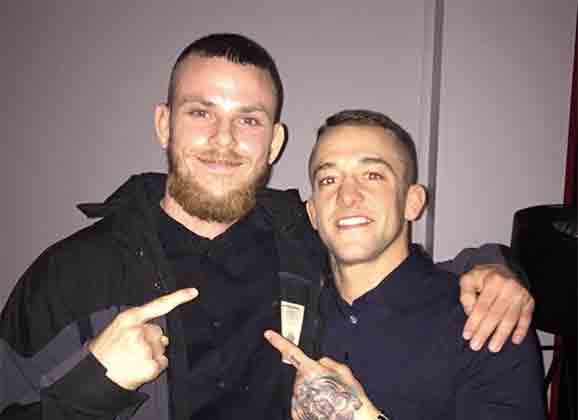 It’s been a week since the Octagon swept into Stockholm. While the results weren’t exactly what the local fans were rooting for, there was a lot of fun, good sportsmanship, and memorable moments during and around the 11 fights in the cage. Here are 10 awesome things.

1) Tor Troeng Brings the Speed Metal
The mathematician from Umea showed his harder side during his intro with “Friend and Traitors” by Raised Fist. As the first Swede to enter the Octagon the local fans got an unsuspected headbanger treat from the Hammer.

2) Forrest Griffin Trying to Ice Skate
While it may not have happened in the cage, the Wednesday prior to the event was a classic. The American, who says he only skated once prior during a blind date, showed he had absolutely no business being on the ice with the AIK team. Check out the video.

3) Nico Musoke’s Gets Better and Better
Outside of Allstars Training Center, Musoke finds himself a bit of a media outcast. But with a mixed camp pieced together with Rinkeby Muay Thai, Prana Jiu Jitsu, and BK Athen, the Swede showed he is getting better. He is now 3 wins and 1 loss in the UFC, with his only loss a close loss to TUF winner Kelvin Gastelum. Can’t wait to see what is next.

4) Gustafsson Versus Evans on the Horizon
While The Mauler went through a period of political talk as he jockeyed for a title shot on the sidelines, Gustafsson is back to his old ways. He wants to fight. When the American former light heavyweight champs name came up, Mauler said he is ready to face the Blackzillan fighter. Will be good to see Gustafsson get a fight and get back in action headed toward a title shot again.

5) Cedenbland’s Drive to Win
Two years ago, Jycken took center stage at Globen to win the first round over the tough Francis Carmont. But when it came to the second round, it all came to the end. After taking a massive kick to the face, it looked like the Swede could be doomed again in the second. But this time, it was Cedenblad that had the endurance and mind to push the action forward and secure the win. Three wins in a row in the Octagon. What a great run for the Swede!

6) Latifi’s Love for Backstrom
The UFC put it’s promotion machine behind the two rising Swedes, and none were more entertaining to watch than the two Allstars Training Center fighters together. While both lost, I’m sure their brotherhood will help their return back to the victory lane much easier.

7) Swedes Cheer “Island”
The local fans backed their fellow viking in the main event. The Swedes wanted to end the night on a positive note and put their energy behind Gunnar Nelson against the American to do it for them. With a roaring welcoming walking into the cage, and cheers of “island” throughout the fight, it was good to see that the undefeated fighter got a boost from the local fans.

8) Akira’s Reppin’ Sverige
While it’s easier to remember to pack the gold and blue when Swedes head off to another country, it was Corassani that came home to show his colors. The images of Akira at open workouts an weigh-ins, showed how happy he was to be back home and fighting.

9) Gunnar Nelson’s Continued Class Act
Gunni has always been different. Never in a rush to get into the UFC or make his way to the top of division, Nelson showed even in the heat of battle shortly after his first loss in the cage that he is in a class of his own. Congratulating Rick Story for the fight, with nothing but support for his opponent’s performance over 25 minutes were done with grace and positiveness. The Icelander’s mentality shows that passion and sportsmanship fuels the welterweight that will have his time back in the cage again. In their post fight picture, it’s hard to tell who really loss this one =)

10) Backstrom and Wilkenson’s Squash the Beef
While there was much heat between the Swede and Englishman leading up to the fight, once everything was settled in the cage, there was mutual respect for what transpired. When the formerly undefeated fighter realized he indeed lost… he had nothing but respect for the winner, and even posed for this picture. Awesome stuff.