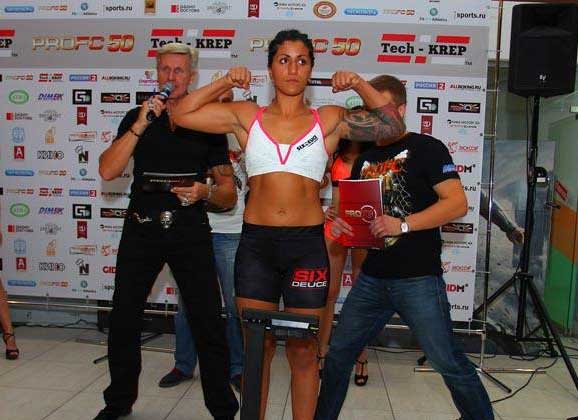 Swede Pannie ‘Banzai’ Kianzad is the Nordic Female Fighter of the Year. The award, which has been owned by Katja Kankaanpää for the last two years, goes to the Rumble Sports fighter that impressed in the TUF tryouts and pulled off a top-notch win against Milana Dudieva in 2013.

Kianzad is undefeated with a record of 4 wins and 0 losses. After a 3 wins in 2012, including a New Years card win in December at Trophy MMA against Lina Akhtar Lansberg, the 145 pounder is one of the Nordic fighters that broke out from the pack this year.

“2014 will be a special year, cuz it’s the year WMMA will realize what’s coming after them. I won’t be shy to say that I’m working to be a world champion in a near future and I will succeed.” says Kianzad to MMAViking.com.

The new batch of female fighters in the UFC have made it into the Octagon through The Ultimate Fighter reality show based on their personality and records. Kianzad was one of the 16 women selected as part of the cast for the TUF 18 reality series coached by Women’s Bantamweight Champion Ronda Rousey and Miesha Tate, but fell ill on her way to the fight to get into the TUF house. With an impressive showing at the tryouts, she is on the radar of the big leagues.

The 21 year old is from Helsingborg, Sweden and now fights out of Rumble Sports in Copenhagen, Denmark. While fighting at featherweight, Banzai is committed to getting down to bantamweight. “I will be fighting 135 when I get in the UFC , until then I will take the fights I get. Of course the main goal is 135.”

The really big win of the year for Kianzad was the victory over UFC bound Russian Milana Dudieva. The Peresvet FT fighter had already beaten UFC fighter Sheila Gaff, and was expected to get a shot in the Octagon with a win at Pro FC 50 in her home country. But it was Kianzad that derailed these plans, but putting together a solid gameplan and showing her all-around skills on the feet and the floor to take out Dudieva with a record of 8 wins and 2 losses.

Two Finnish fighters also had very notable standout years. Tina Lähdemäki extended her overall record to 5 wins and 0 losses by notching 3 wins this year. Katja Kankaanpää, winner of Nordic Fighter of the Year in 2011 and 2012, also debuted in Invicta in April beating Juliana de Lima Carneiro. Killer Bunny also lost a close decision to Joanne Calderwood in a battle for the best in Europe earlier in the month in a bout that showed she is one of the best in the world.

While there is some discussion that the newly announced Female Fighter of the Year might be seen next rematching Lina Akhtar Lansberg at Trophy FC, the Swede comments “I won’t be fighting Lina in the near future. Not that the fight isn’t interesting to me but I don’t see my gaining anything in it right now. It’s better if we face one another when we have better record and more fights.”

Stay tuned for another eventful year for Pannie Kianzad and women’s MMA.