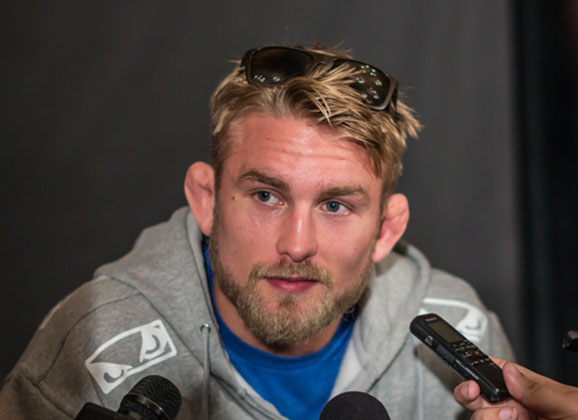 Swede Alexander Gustafsson will again join the biggest stars in the UFC as the leading promotion will GO BIG on Friday, September 4. UFC President Dana White will join the top fighters in the world in advance of UFC 191 to preview the upcoming lineup for the Las Vegas festivities. The event, which is free and open to the public, takes place at the MGM Grand Garden Arena and will be streamed live on ufc.com.

Alexander Gustafsson will join other fighters shooting for the title later in the year, including Carlos Condit, Luke Rockhold, Donald Cerrone, and Holly Holm, along with UFC champions Ronda Rousey, Daniel Cormier, Conor McGregor, Robbie Lawler, Joanna Jedrzejczyk and Rafael Dos Anjos. Legends such as Dan Henderson and Vitor Belfort and several others will be in attendance.

GO BIG will launch September 26 with UFC FIGHT NIGHT®: BARNETT vs. NELSON and will culminate on January 2, 2016 with UFC® 195: ROUSEY vs. HOLM. Strawweight champ Joanna Jedrzejczyk will defend her title at UFC 195, opponent to be determined, marking the first ever UFC event in which the main and co-main events feature women’s title defenses. The campaign will also include a special two-event weekend, featuring THE ULTIMATE FIGHTER®: TEAM MCGREGOR vs. TEAM FABER FINALE (Friday, Dec. 11) and UFC 194 (Saturday, Dec. 12).

Following the announcement, the UFC invites media and fans to attend the UFC 191 weigh-ins at MGM Grand Garden Arena.

The following athletes will headline UFC events during the GO BIG seasonal campaign:

Gustafsson is currently training in Stockholm at Allstars Training Center. The Mauler will be traveling to Las Vegas for this event next Friday, the back home to Sweden before heading back to Texas for his bout on October 3rd.