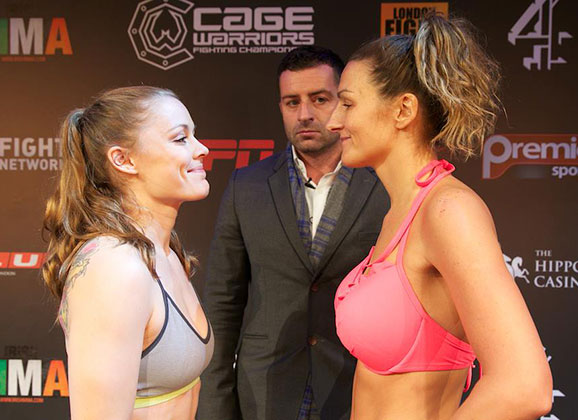 Copenhagen’s Rumble Sports was on a role in London on Saturday night. Setting the tone first was Anna Elmose (1-0) who only needed 19 seconds to stop Emma Delaney to kick off the Cage Warriors 74 card and her pro career. “I am tired but mostly because of the adrenalin dump and it has been a long weekend.” says Elmose to MMAViking.com shortly after the fight.

“I went straight at her with punches, she clinched up but I’ve been working on my judo takedown defends with the best judo player in Denmark, Thomas Iburg, and the wasn’t able to get it and I got and left punch which sent her down and I followed up to punch her until the ref pushed me off.” says Panda of the quick bout.

@Anna_Elmose kicked ‪#‎CWFC74‬ off in spectacular fashion with a TKO of Emma Delaney after just 0:19 of round one in our opening bout of the night here at the Copper Box Arena in London #MMA #London

The Dane was in the corner of her two Rumble Sports teammates, and saw them both get their hand raised, too. First, it was Pannie Kianzad (7-0) who beat Finn Eeva Siiskonen (3-2) to earn capture the Cage Warriors inaugural women’s bantamweight title. Then, in the headliner it was Nicolas Dalby (13-0) who made his first title defense against Mohsen Bahari (8-2) in impressive fashion to retain his Cage Warriors belt at the Copper Box Arena in London’s Olympic Park.

“I feel really great, I’m so proud to be making my pro debut on such a great scene and when it turns out this way it couldn’t be better:)”

“I would like to thanks Rumble Sports, Nybolig Jagtvej, Thomas Iburg, fit4fight, my family and friends for sticking on to me although, I don’t have time for them.” says the bantamweight.