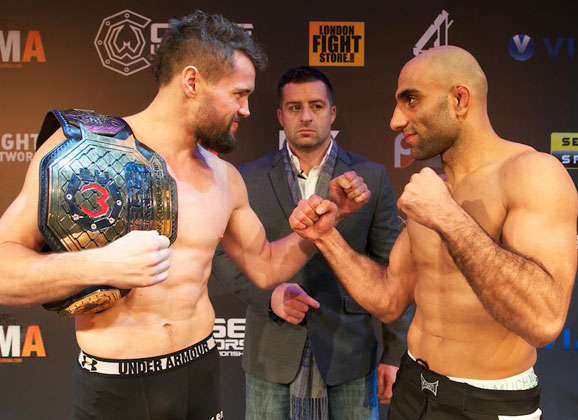 Dane Anna Elmose (0-0) will kick off the Cage Warriors 74 card in her pro debut. The vacant CWFC women’s bantamweight world title will be up for grabs when Finn Eeva Siiskonen (3-1) faces Swede Pannie Kianzad (6-0). Champion Nicolas Dalby (12-0) from Denmark will face Norway’s Mohsen Bahari (8-1) in the final fight of the night.

@Anna_Elmose kicked ‪#‎CWFC74‬ off in spectacular fashion with a TKO of Emma Delaney after just 0:19 of round one in our opening bout of the night here at the Copper Box Arena in London #MMA #London

Siiskonen enters the cage first wearing a bright yellow top. Kianzad enters next with an Iranian inspired music, and walking in to both the Iranian and Sweden flags behind her.

Round 1
Here we go. Kianzad looking to land a big right early. Not too much action after a minute. Now a double leg take-down bring the fight to the mat, and Siiskonen gets full guard. The Rumble sports fighter landing some ground and pound, but it is now Eeva with an armbar. Kianzad is forced to defend, and it is close. The thread is gone. With a minute left the referee brings them to their feet. The two exchange without much advantage.

Round 2
Kianzad is looking sharper on the feet, as Siiskonen is a bit hesitant. The Finn is waiting to counter, but not much action. The pace is quickining from Kianzad as she is fresh and moving well on her feet. The left hook seems to be a real weapon here, where she lands to both the face and the body.

Round 3
Good right early from the Swede, and you feel the tide turning. In the clinch however, the Finn turns Pannie to the cage… but Pannie turns it back around. Good knees to the legs from Kianzad that is wearing down Siiskonen. Ref breaks the two, and Kianzad is quick to establish her jab that she mixes in with a left lead hook. Good head movement from Kianzad, and now a combination leading to an elbow. The Finn shows she is still in it as she grabs the head and looks for a big knee to the face, but it isn’t there. Good round for Kianzad.

Round 4
Siiskonen has a quick left high kick, and she tries to mix it in to keep Kianzad away. The Swede tries for a double-leg takedown, but good hips keep the Finn standing.

Pannie, in her first fight at 135lbs. is looking great. You have to give credit to Siiskonen, who is stepping in on just a few days notice is also looking good in her first championship rounds. Good combination for Kianzad, and it seems she is on autopilot heading toward Cage Warriors gold.

The two tie-up with some grinding exchanges. And on to the last round.

Toni Tauru in the Finns corner, urging her on to finish strong.

Round 5
The two acknowledge their work so far. It is Siiskonen that tries a quick takedown! But Pannie defends, and keeps the feet on the fight. More tie-up, and each tring to land punches inside. Kianzad takes back standing against the cage, and she takes Siiskonen to the ground. Kianzad is spooked, and doesn’t want anything to do with the Finn on the ground. She gets up, and the fight is standing.

Siiskonen is landing that left front-kick to the face again showing she won’t go down easy. One minute left. To the cage again, and the fight ends.

Pannie is emotional in the win, as she becomes the first bantamweight Cage Warriors champion. “I never thought this could happen. I never believe I could be world champion one day”

Round 1
They meet in the middle, circling and having a feeling out process. Dalby lands a nice right hand over the top, trying to keep distance. Dalby with another good series of strikes. Bahari throws up a beautiful headkick but is blocked by Dalby, now goes forward with a combination and it looked like he hurt Dalby! Bahari gets a hold of a leg, almost completes a takedown but Dalby shows great balance and keeps it standing. Dalby now going forward with punches, but Bahari have no problem staying in the pocket throwing leather. Dalby playing more of a in and out game right now, ducks under and secures a takedown. Bahari gets up, and stalks down Dalby looking to counter. Bahari now lands a combination beautifully, and Dalby answers with a good punch. End of round. MMAViking scores that round 10-9 to Nicolas Dalby.

Round 2
Both of them are a still very technical, landing solid combinations. Dalby lands a punch clean and hurts Bahari a little, Dalby goes for the takedown, and lands in full guard. Dalby on top, landing some ground and pound, doing a good job with elbows and cuts Bahari. Mohsen Bahari creates some distance and pops up, gets hit by Dalby on the seperation. Another quick combination lands for Dalby! Ends the round with a takedown and top control. MMAViking scores that round 10-9 to Nicolas Dalby.

Round 3
Bahari now the one moving forward, throwing some hooks with bad intentions. Throws a bodykick and eats a overhand from Dalby. Bahari stuffs a takedown and punishes Dalby on his way out. Mohsen Bahari trying to get in and brawl but Dalby is showing great movement. Dalby able to take Bahari down, maintains top control but not really doing any damage. End of round. MMAViking scores that round 10-9 to Nicolas Dalby.

Round 4
Dalby again looking for high-kicks, and looks like he has found Bahari’s chink in the armor. The pace is high for Dalby, that keeps bouncing on his feet… looking for angles. Bahari moving forward slowly, and Dalby sees an opening for a take-down. Bahari looking for a guillotine, and enough to scare Dalby as he backs up to his feet. It is now Bahari looking for damage with elbows and punches. The two keep exchanging, but a change of levels and a double-leg take-down. He looks to pass right away, and offense is on his mind. Bahari gets back to full guard and they make the way to the cage. Bahari temporarily locks up a triangle, but nothing there. The Dane ends the round on top. MMAViking scores that round 10-9 to Nicolas Dalby.

Round 5
The two touch gloves to start the fight. The Sharpshooter looks for a take-down early, but Bahari defends well. Dalby is still mixing up kicks and strikes, but Bahari still looking for a big punch and he lands a right. Dalby though looks to be in control, and lands a big right hand of his own. With under two minutes now, and Dalby uses the double-leg take down again. Mohsen pops up to his feet. The two are still throwing bombs, but Dalby tries to sneak in a take-down… but he won’t get it. Spinning head kick from Dalby, but it misses. Bahari’s face shows the wear of a 5 round fight. MMAViking.com scores all 5 rounds to Dalby.

“He is as tough as nails.” says Dalby in his post fight interview.