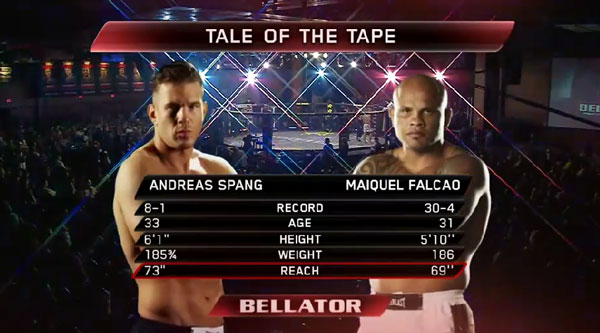 Swede Andreas Spang (8-1), who now resides in the US, will take on Maiquel Falcao (30-4) for the middleweight Bellator title and $100,000.  Yesterday, it took Falcao a second try to make weight, but he eventually made the 186 pound limit.  The two will face-off on Friday’s main event, which takes place at L’Auberge du Lac Casino in Lake Charles, Louisiana, USA.

The fighters are now walking into the cage.  Spång looks focused as Beastie Boys play as he walks into the Bellator cage.  Falcao does not look happy as the two come out to the fight, with a focused look in his eye for the main event at Bellator 69.

Round 1:
Both sizing each other out with conservative approach at the beginning, but Spang lands a huge uppercut to start the bout and has the Brazilian hurt within the first minute.   The Swede keeps throwing punches to try and put away his opponent, and lands several shots.

Falcoa is in trouble, and clinches with the Swede to clear his head.  The two are up against the cage, and Falcao is able to get a take-down by going behind Spang and picking him up for a slam.  Falcoa controls the bout and has his back, but while on top Falcoa throws an illegal knee to the head of the downed opponent.

Spang is hurt from the move, and his opponent is deducted a point.  Spang takes the time to recover, but still looks a little dazed.  The fight goes is started again, and the Swede lands a good kick to show he is somewhat recovered.  Spang tries to secure a guillitine when they clinch, but Falcao is able spin out, and the two are back on their feet.

The round is close, as Spang damaged early, but the Brazilian spent time on top damaging the Swede with punches.  The point deduction is for certain, so the Swede goes into round two up two points or tied.  Not sure if the Spang is recovered from the knee.

Round 2:
Falcoa is again trying to find a way to avoid the standup with the dangerous Swede, and is able to bring the fight to the ground as Spang tries a hook.  Falcao with the takedown, and the Swede is unsuccessfully for another guillitine.  Falcao is damaging on top with punches from behind Spang, using short blows.  Spang seems a little tired as he looks for the ref for help in asking for some help by looking for the ref to acknowledge punches to the back o the head, but the ref does not step in.

The Swede makes it to the cage to try and get up, but Falcao picks him up and puts him back on the mat.  With 30 seconds left, the two are on the feet, but only for a second as Falcao takes the fight to the ground.

The Brazilian takes the round.

“You’ve got to keep it on the feet” Spang’s cornerman yells, but early into the round the Brazilian again is able to bring the fight the ground.  The Swede is tired, and finds himself on his back again… taking knees and punches as he loses all the momentum he picked up in the first round.  With two minutes left the Brazilian is pounding away with knees to the body, and punches to the head of his opponent.

Spang is desperate and tries another guillotine, and it looks close with one minute left, but he is too tired to finish.  It’s back on the feet and the Swede looks for a big punch to try and end it.  Again, Spang stalks his opponent, but the fight goes back to a familiar position as Falcao brings the fight back to the ground to finish in mount.

The Brazilian takes the round.

With the point deduction, there is a chance for a 4th round.  If Spang won the first round on the score cards, plus the point-deduction, it should be a draw since rounds 2 and 3 were clear cut for the Brazilian.

All judges agree, and score the bout 29-27 for the Brazilian.  Maiquel Falcao wins by unanimous decision.