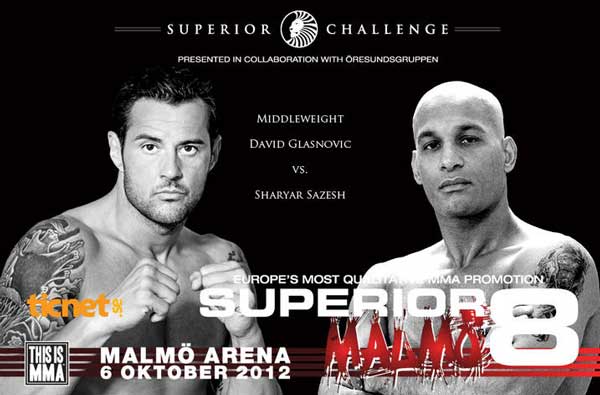 The now successful businessman and entrepreneur David began practicing Taekwondo at an early age and did eventually earn a black belt. He competed successfully in the discipline for many years and was soon recognized as one of the foremost Swedish Taekwondo practitioners. Later, he started with Brazilian Jiu-Jitsu and it was not long before he began to compete even within this discipline, and Submission Wrestling. Today he has a brown belt in BJJ and a lot of matches behind him. After a long martial arts career and a lot of competitions, he decided to combine his Taekwondo with BJJ and take on the only challenge that remained for him in martial arts, MMA. Since a few years ago he also runs his own MMA academy, AVAM in central parts of Malmö, and now he’s tackling on perhaps the toughest challenge of his martial arts career. On October 6th he will make his professional MMA debut at Superior Challenge 8 in the presence of his home crowd in Malmö.

Sharyar is the type of MMA fighter who hasn’t come to the sport from any other martial art discipline, but started directly with MMA. The Hilti fighter has competed successfully in Submission Wrestling and after one Shootfighting bout, he went on to compete as pro in MMA. The 34 year old has a tremendous will for training and is almost always in good shape for a fight. He is a complete all-round fighter who masters both the sport’s stand-up and ground game.

Babak Aghavali, CEO Superior Group International:
– I am really looking forward to David’s MMA debut, just like the rest of Malmö. I also look forward to see how Sharyar has evolved since his last fight. This is definitely a bout that will not leave anyone indifferent.