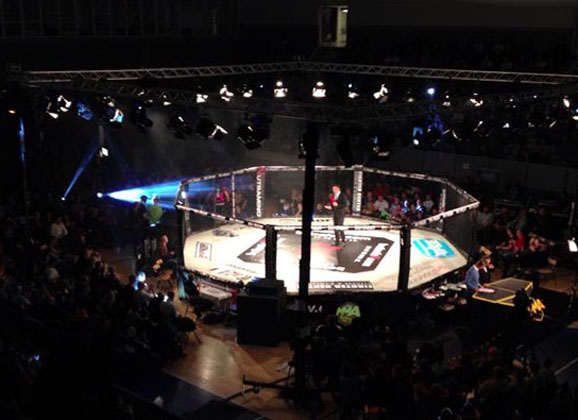 MMAViking.com is live at the Vejlby Risskov Hallen in Århus for European MMA 7. Simon Carlsen (8-4, Denmark) and Tomasz Narkun (7-1, Poland) top the card as they battle for the EUMMA belt. Notables such as Dane Maria Hougaard Djursaa makes a return to EUMMA, and Finn Toni Tauru square off in a much anticipated bout against Swede Emil Hartsner. See live results and play-by-play here for the big event going down in Denmark on Thursday night. Stay tuned for cageside pictures and video interviews. 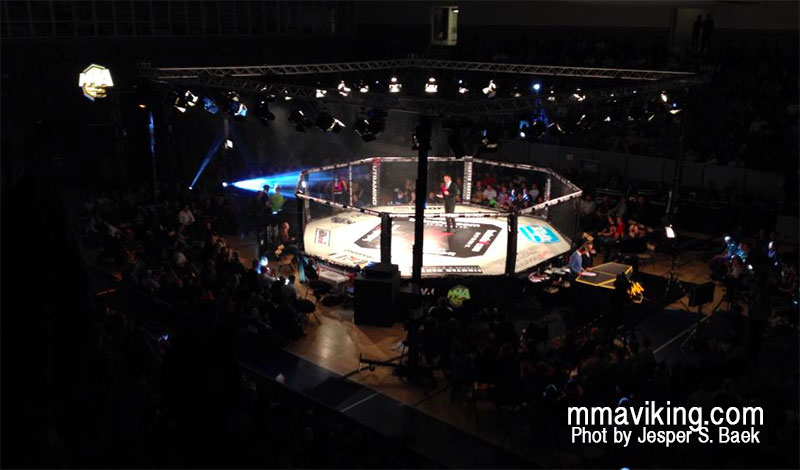 Emil and Toni went hard stranding up, trading and clinching early in round 1.  Toni almost gets it to the ground a few times.

There is blood on the head of Tauru, and he is cut.

The Finn is on his back and looking for a triangle, and now transitions to a gogoplata.

Right as the round ends Tauru is able to finish the submission.  Hartsner taps, and it is Tauru with a win by gogoplata at the end of the round 1.  Huge win for the Finn.

It is Ayin who rushes in early this one, and lands a big head kick.  Ayin doesn’t was any time and locks up a guillotine on the still dazed Tashkilot.  It is tight, and Tashkilot is out.  It is over in less than a minute.

Now the televised portion of the card is starting… so a little break in the action.  It’s the women up next.

Tights and rash guard for the Dane.  She rushes in for the clinch right off the bat, and it’s Djursaa and Buch against the cage.  Djursaa is able to get it to the ground with a take-down, but Buch reverses it and is looking for a guillotine from the top, but the Dane stays calm.  Djursaa is now back on top, as the two exchange positions.  Now Djursaa goes for the neck as the two stand up near the cage and Djursaa is working for a rear-naked-choke with no legs in.  Wow, Buch taps quickly and it is over.

Chanda comes out swinging and touches Tomassen’s chin with a right hand, applies pressure and puts him to the cage. Another hard shot and the Dane is searching for a guillotine. Tomassen escapes and they resume the stand-up. Flying knee for Chanda. Tomassen takes down Chanda, they scramble and regain the feet. Chanda is reaching for punches and find mixed results. Thai clinch for Chanda and he scored with a solid knee. Stiff left lands for the Dane.  Chanda mixing in low kicks and finding success until the Norwegian pushes him to the fence. Chanda attempts a knee on the break, but misses. Chanda winging with his hooks and mainly finding air. Tomassen lands a right hand which is countered by Chanda’s low kick. Right hand lands for Chanda, but he is now circling on the outside. The round ends with Chanda considerably slowed and Tomassen slightly bloodied on his right eye.

Round 2: Chanda lands with the left hook and finds a place for his leg kicks. Tomassen is caught coming in by a light knee to the chin from Chanda. Chanda is comfortable ranging from the outside and peppering Tomassen with leg kicks, scoring with hooks every time Tomassen attempts to close the distance. Low kick from Chanda takes the spring out of Tomassen’s step and he slips, but regains composure. Tomassen attempting to check the kicks. Appears to be a very conscious effort. Chanda puts his back to the cage and grabs the clinch, but still appears offensive. Chanda continues with these kicks and it appears Tomassen has no answer. He stalks forward and takes the kicks. Chanda closes distance with a hook and takes a right hand for his trouble. Tomassen throws a kick and loses balance. Chanda throws a right hand and Tomassen attempts to close the distance with an underhook but is easily shrugged off. Chanda bounces off the cage moving backward and puts a lead hand to Tomassen’s cheek. Chanda is comfortable on the outside, throwing leg kicks in volume and hardly bothering to set them up, landing leg-kicks at will.

Round 3: Front kick from Tomassen finds air. Chanda finding the leg of Tomassen with his shin again early. Tomassen sniping and laces together a combination. Tomassen with a right hand. Jab hook combo lands for Chanda. Tomassen has no sense of urgency and is leaning away from the heavy winging punches thrown by Chanda. Chanda lands a heavy kick on the calf of Tomassen before being pressed to the cage. He shrugs it off and once again finds his place on the outside. Chanda misses with a flying knee, right-hook combo. Chanda tags Tomassen with a left and a right, followed by the low kick as he moves around the outside. Excellent head-movement and footwork set up the repetitive leg kicks, which has become the story of this fight. Chanda lands with a looping left moving back, cuts his corner and puts the right on the jaw of Tomassen, but without significant steam to have much effect. Chanda evades and once more drops the hammer with his leg-kicks.

Round 1: The two big men take the cage and begin with a feeling out process before the Dane throws a big winging right, that just falls short. Finding range, Carlsen throws a leg kick and takes to the outside of the cage. A reverse kick from Carlsen lands to the body. The two tie up against the cage and the Polish fighter finds himself on his back, searching for a triangle. The two find their feet with 3 minutes remaining. Narkun is pushing the action and forcing the Dane to the cage. Carlsen is eating big shots but manages to reverse and push Narkun to the cage briefly. Once again the tables turn and Narkun is on the outside. Elbow over the top lands for Narkun. Narkun is breathing heavily, but retains the center of the cage before eating a left-right-left hook combo from the Dane as the horn signals the end of round 1.

Round 2: Carlsen gaging distance with the jab, which doesn’t touch. Left hook for the Dane and he stuffs two takedowns in a row. Low kick as the Carlsen moves to the outside. Gauging reaction with feints before throwing a spinning back-kick to the body of Narkun. Backing up  against the cage Carlsen lands a heavy right hook. The Dane now controls the center of the cage. Carlsen angrily gesturing Narkun up as he loses balance. Narkun pushes Carlsen to the cage, but soon finds himself on his back with the Dane throwing leather. Narkun slips the arm between his legs and rolls out to straighten it. The arm is locked and Carlsen taps to the armbar.

Eddie Murray walks out in Cowboy Boots and a Stetson hat, whereas Hansen just showcases his dancing style during the refs pre-fight checkout.

Round 1: No touch of gloves as the two enter the center. The American reaches for the body of Hansen with a jab and takes a right hand for his trouble. A mad scramble around the cage with Murray as the pursuer, searching for the takedown. Murray presses the Dane to the cage and swings a heavy elbow with nasty intent. Both men firing knees as the American’s pressure keeps Hansen against the fence. Murray gets ahold of a single leg but loses it to Hansen’s sprawl. Murray digging deep for the takedown as the Dane takes to the top position with elbows. Against the fence with underhooks for the American before the break. Leading right hand for Murray, who falls short but manages to press Hansen to the cage. Hansen reverses and scores a knee before finding his neck in the American’s hands. Hansen continues to fight with vicious elbows and knees to the leg of Murray who is still holding on to his guillotine. Hansen escapes and Murray attempts to hit the switch but is stuffed.  The American finds his face on the mat with the Dane’s punches landing as the bell sounds.

Round 2: The touch of gloves missing from round 1 starts the second stanza and Hansen hits a left-right combo before pushing Murray to the fence. Murray with a reaching right hand. The American wings punches which miss, left, right, left, then pushes the Dane to the fence. On the break Hansen finds the center and secures a toss. Murray rises quickly to his feet but eats a knee to the body. Murray once again uses his speed and wrestling to attempt to keep the Dane on the fence, to no avail. Murray attempts to take a guillotine to the mat, but loses it and finds himself on his back with the Dane in side control. After a scramble Murray takes the back of Hansen, but is reversed and finds himself fending off a kimura from the Dane. Hansen has taken control of the American’s back and is laying down leather and knees. Shouts of ‘Move’ coming from the American’s corner as he eats the deluge of punches and has no answer. Hansen is pouring it on thick and the stoppage comes with seconds left in the round.

Niklas Dalby will be in the corner of Damir Hadzovic during this contest.

Round 1: The round begins with a touch of gloves and Hadzovic moving forward with the jab. Colleuil attempts to close the distance with a hook, but misses. Colleuil secures a takedown and rapidly finds himself ensnared in an armbar as Hadzovic rolls to transition but instead finds the submission opportunity. The arm is pulled taut and Hadzovic secures the victory by way of Armbar Submission.

Stay tuned for exclusive video interviews and pictures! Be sure to like us on Facebook for free updates!