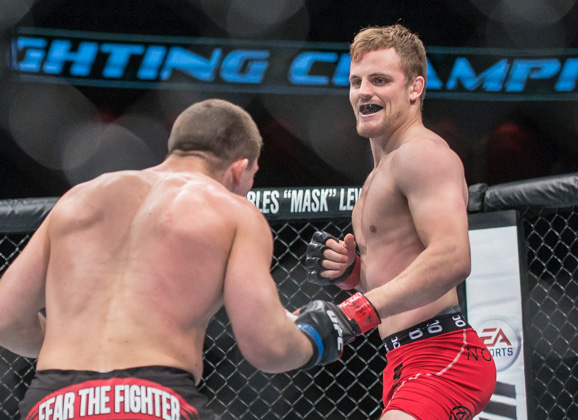 Gunnar Nelson (13-1-1) has been out of the Octagon since headlining in Stockholm four months ago, but the Mjölnir/ SBGi fighter is now targeting a return date. “He is interested in being on the Vegas card in July but we don’t know if he will fight before that” says father and manager of Gunnar, Halli Nelson, to MMAViking.com.

“Gunni” started 2014 with two impressive wins in the Octagon, the first was a fight-ending guillotine in the opening frame against Omari Akhmedov in London this past March. The 26 year old then followed up with a rear-naked choke in Dublin over American Zak Cummings in July to the Dublin fans delight.

When asked by the UFC to come back and fight less than three months later to headline a UFC in Sweden, Nelson who had just become a father, put everything on hold to face American Rick Story. It was the first time that Nelson topped the billing of a card. The “UFC Fight Night – Nelson vs. Story” event, however ended up giving Nelson his first blemish in his career with a split decision loss in a five round battle.

Before the loss in October, the BJJ black belt under Renzo Gracie had run up 13 straight wins with four of them coming in the Octagon.

The fighter out of Reykjavík was set on taking time off to be with his family and keep training after the hectic 2014 schedule. Without any immediate booking this year from the UFC, the healthy Icelandic fighter is now setting his sights on International Fight Week in Las Vegas. UFC 189 on July 11 will be one of the biggest events of the year, as is expected to be headlined by a featherweight title bout between the current champion Jose Aldo and Nelson teammate Conor McGregor.

“Gunni hasn’t asked for a fight.” says Halli Nelson to clarify the situation of not being booked yet for a growing announcement of cards in Europe that could use some star power. The targeting of a July fight for his first Octagon bout in North America is still up in the air for the top Nordic welterweight and 15th ranked in the world. “That’s up to the UFC” comments Nelson.