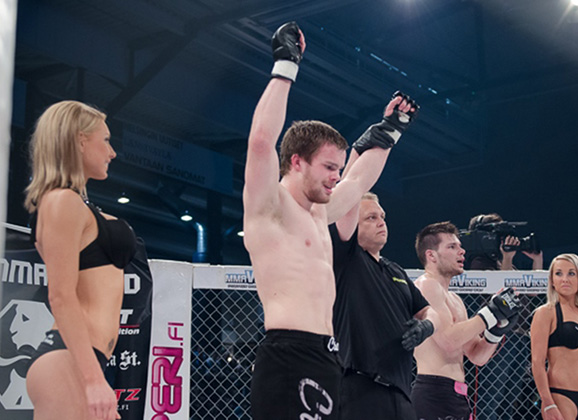 Finn Jani Salmi (5-2) will face Sean Carter (10-2) at FNF 10. It will be a big step up in competition for the Primus Fight Team fighter as he looks to extend his four fight winning streak against the Cage Warriors FC veteran from England.

Last time we saw Carter in May when he fought for the Cage promotion in the main event versus Anton Kuivanen. It was Kuivanen that won by decision after three rounds. Carter has only two loses in his carier. First was against UFC fighter Steven Ray and second against Kuivanen, who is 1st ranked in Nordic MMA.

“Carter is well rounded and appreciated fighter in Europe, so this will be true challenge for young Finn. Jani has been training with his own coach for 9 months and he weekly has 10-12 training sessions. The Finn has good self confidence and he is hungry to take place in Nordic MMA Ranking. Carter is much more experienced than Salmi, but hungry young lion is ready to take this challenge. He has been training hard really long time and his mental and physical condition is extremely good. We all have noticed that also much bigger names are in trouble with Jani, when he put big gear on in sparring sessions.” comments matchmaker Matchmaker Olli Hartikainen.

Juho Valamaa will headline Fight Night Finland 10 (FNF 10) against veteran Jack Mason in a solid matchup of high-level European welterweights. The bout will take place in Turku on October 10th at the Kupittaan Urheiluhalli.